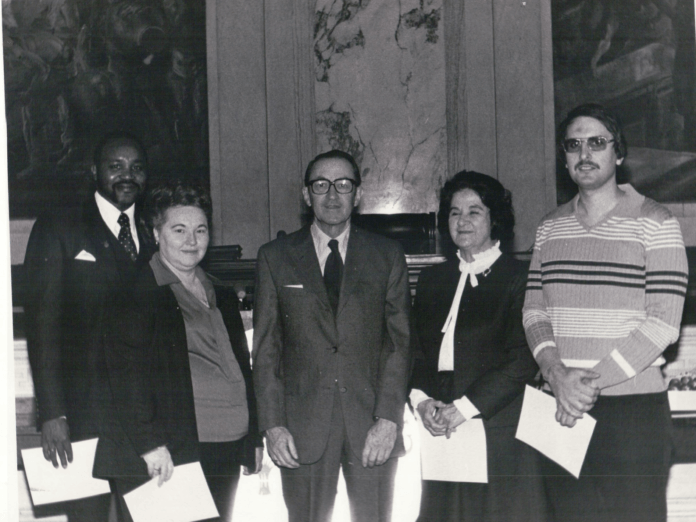 Former Mayor, Arthur John Holland, served the City of Trenton for 26 years. Beginning his first mayoral term in 1959 and ending his final term upon his death in 1989, Mayor Holland dedicated his time in office advocating for equality in a time of racial disparity.

Born October 24, 1918, Arthur John Holland spent the earlier parts of his lifetime studying for the priesthood within the Roman Catholic church. However, rather than becoming an ordained minister, Holland graduated from St. Francis College and pursued his education at Rutgers University, where he eventually received his M.A. in Public Administration.

Before running for Mayor, Holland served as the Deputy Director of Public Affairs beginning in 1951. In 1955, he was elected to the City Council. After winning his first mayoral race, Holland became the Mayor of the City of Trenton in 1959.

Throughout his time in office, Mayor Holland became known around the City of Trenton as “Honest Art” and “Mr. Clean” for his fairly, scandal-free terms. During his position, Mayor Holland insisted on running an “open-door” government as a way of connecting personally with the citizens of Trenton. This often involved regular meetings with members of the community to address local concerns.

As a mayor of a racially-diverse city during the Civil Rights Movement, Mayor Holland took a firm stance on integrating the City of Trenton. In fact, to further demonstrate his commitment to equality, Mayor Holland, his wife and his infant daughter decided to move to Mill Hill in 1964. At the time, Mill Hill was considered to be one of the most racially-mixed neighborhoods in Trenton.

The decision to move received national attention. Holland knew at the time he would receive outsider backlash. Around the time period, Holland told The New York Times, “This is not a popular move. The average person feels it’s very foolish, and some members of my own family have looked askance.”

It is believed that this move caused outsider controversy and led Mayor Holland to lose reelection in 1966 to Carmen J. Armenti. However, the loss did not deter Mayor Holland from advocating for an improved city.

After the loss, Holland took a four year political hiatus and began teaching at his former school, Rutgers University, for the university’s Urban Studies Center. In addition, he began working as a consultant for agencies in Washington, D.C.

In 1970, the City of Trenton endured a number of riots and protests following the assassination of Dr. Martin Luther King Jr. At the time, Holland was able to defeat Armenti in the reelection year and reclaimed his position as Mayor, where he stayed until he lost his fight with cancer on Friday, November 10, 1989.

Throughout his lifetime, Mayor Holland brought a significant amount of changes to the City of Trenton. While in office, he paved the way for redevelopment for many struggling neighborhoods and helped to nurse Trenton through floods and a severe water shortage after intake pumps broke. Most importantly, former Mayor Holland encouraged the citizens of Trenton to become involved in the city’s politics and stand together as Trentonians.