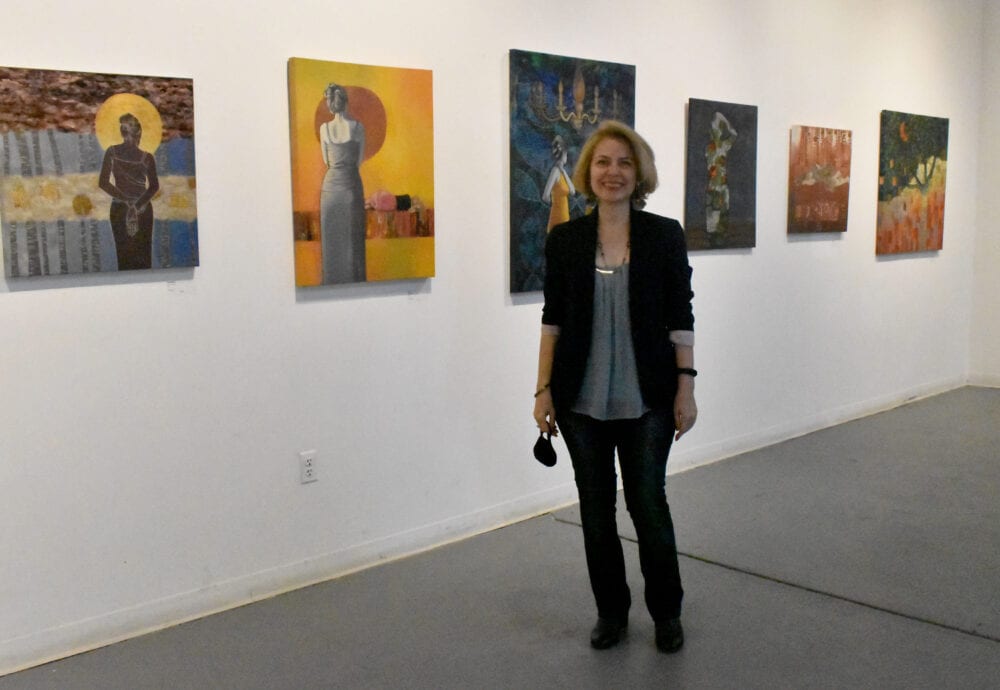 Iranian artist Shahla Mansouri captures the connection between womanhood, nature and tranquility in her new exhibit Peaceful – Thoughtful at Artworks of Trenton. The exhibit is available to view from October 27 through November 21 by appointment or anytime virtually at https://artworkstrenton.org/peaceful-thoughtful/ .

The exhibit, which showcases over 45 pieces of artwork ranging from monoprints, drawings on cardboard, collages and acrylics, represent not only the simplistic beauty that is a woman’s figure and soul, but the moments society far too often passes in the modern fast-paced world.

“Every year in the spring, everything is new for the tree and leaves,” said Mansouri, “Women are like nature; every year, they become new. I think they are connected together.”

Growing up in Iran, Mansouri was limited in her artistic expression, especially art surround women. “In Iran, we can’t show the woman body in a public place,” said Mansouri.”Woman is avoided in Iran.”

As a young artist painting such scandalous work in the country of Iran, she had to be cautious. Around the age of 25, Mansouri and a group of four female friends formed a secret group where they would create art admiring women. Every week, the five women would meet up and model for each other.

After this ongoing project progressed, the group of women realized they had enough work to create a shared art exhibit. Upon learning one of their friends had an empty house, Mansouri and her friends went to work on this secret mission.

“We colored all of the walls and when it was ready, we had lots of paintings,” said Mansouri. “I think there were maybe 50 to 60 paintings.”

Once the exhibit was ready to be showcased, the five women knew they could not just let anybody in to see their highly-controversial work.

“The people needed to make an appointment because we were afraid about the government knowing about our exhibition because if they (come), maybe we would be in trouble,” said Mansouri.

Luckily for the women, their exhibit remained low-key and many people from the surrounding community came to see the secret show. In fact, one important individual attended the event that would change Mansouri’s future forever.

“That Exhibit is how she met my dad,” said Gelareh Kolahchi, daughter of Mansouri. “One of his friends, his sister was friends with my mom and the sister was one of the five people in the group.”

According to Kolahchi, based on stories she was told, her father, Mohammad Rez Kolahchi, persisted on getting in to seeing the exhibit. She said, “(My father) liked the art and was like, ‘oh my god, I love the art, I’ll come back.’ He came back and kept flirting and that’s how the magic happened.”

Since then, Mansouri and her daughter moved to the United States in 2017 to pursue art as a career. Due to complicated immigration issues, her husband has stayed in Iran.

While in the United States, Mansouri and her daughter have both been growing as artists in their own right. Her daughter is currently a student at Mercer County Community College studying music. She says her mothers journey has inspired her to chase after her dreams, even when they seem unattainable and scary.

She continued, “She pushes me all the time. She says, ‘you make music? go find connections.'”

Mansouri believes it is important to continue pursuing what makes you happy, no matter the fear that may come with it. “When I am painting I forget everything and forget the times, problems, everything,” said Mansouri. “It is therapeutic for me and after that, I become so happy.”

The artwork on display in the Peaceful – Thoughtful exhibit is a physical representation of Mansouri processing her emotions, showcasing her beliefs on the power of women and sharing her passion with the City of Trenton. She hopes that the community will take a moment out of the fast-paced world to digest her work, connect with it and resonate with the present.

“I want to say something to the people because now the technology goes very fast. People don’t have enough time for standing and looking around,” said Mansouri. “I want to say live in the now, not for the future or the past.”