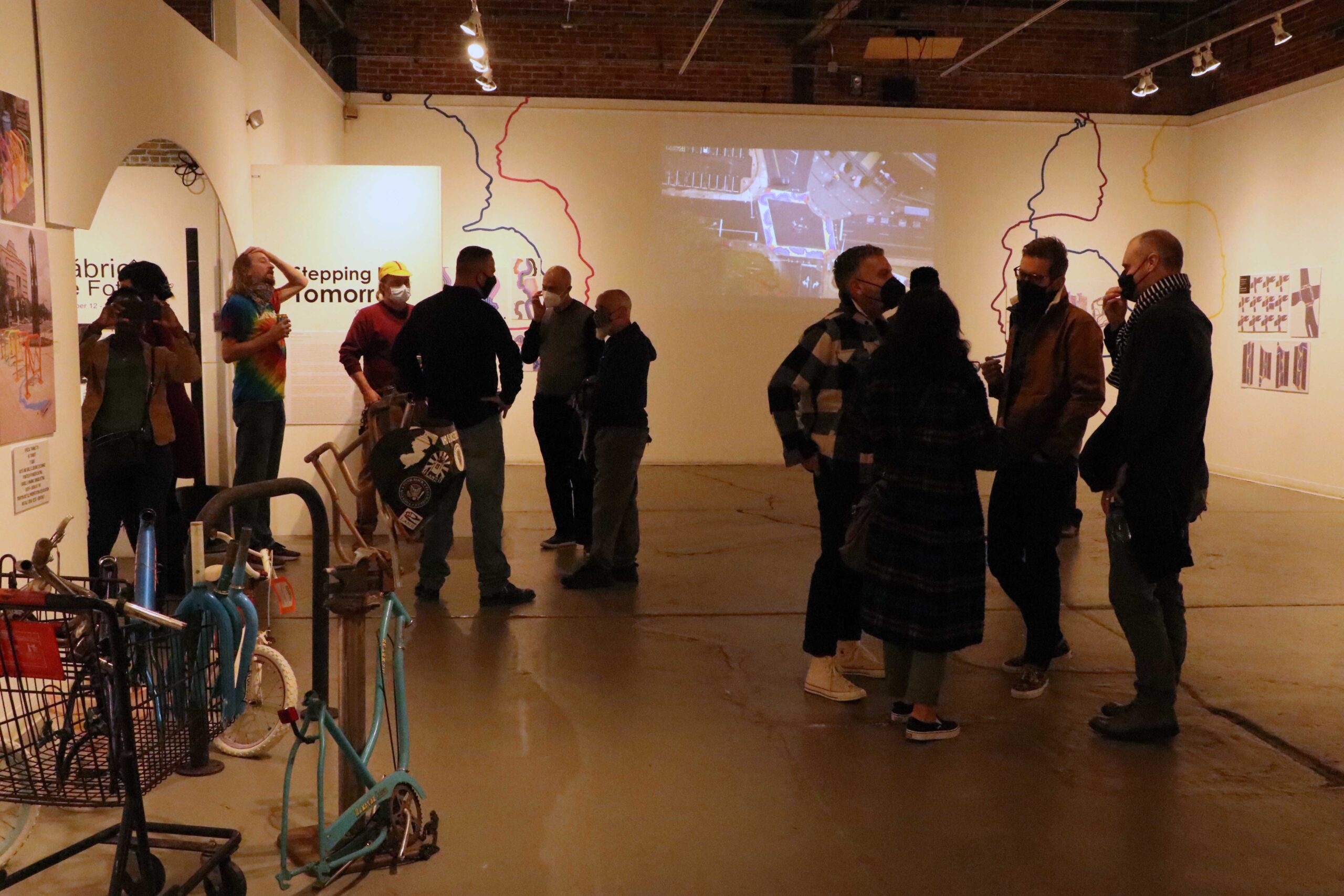 This past weekend, Trenton Artworks hosted a reception to recognize public artworks from its Stepping Into Tomorrow and TRANSITional Art Projects. Both were on display in the Artworks gallery for attendees to come by and admire.

The connecting tissue of these exhibitions is that they were both shown at the Trenton Transit Center for commuters to gaze at as they waited for their trains. The TRANSITional Art Projects included ten banners that hung around the exterior of the Transit Center and five pieces within bus shelters, all created by New Jersey Artists.  The exhibition included a 2D Art Banner system, vinyl murals located at the East and South Bus Stops. The project lasted from September to November.

That particular exhibition has ended, but there are two other projects that commuters and tourists can see: The Stepping into Tomorrow CrossWalk and the re-envisioned bike rack sculptural installation.

The re-envisioned bike rack was entirely made by using Trenton Based local shops and companies. “All the construction, everything happened in Trenton, then they were installed right by the river line. And hopefully, they will be there for the next 20 years,” Will Kinsley, artist of the Bike Stands, said.

This is the first artistic bike rack on the NJTransit system, and Kinsley mentioned that there is always a bike on the rack when he sees his artwork. Kinsley aims to make more of the urban settings people brush by look interesting. “There’s no reason why we shouldn’t have interesting artistic infrastructure,” Kinsley said. “The things that we look at the most times, we’re looking at all the traffic lights, everything is just plain in designed.”

The second half of the exhibit features Stepping Into Tomorrow, the crosswalk painted right outside the Transit Center. The Exhibit at Artworks features a play-by-play of the Crosswalk’s planning, sketches, creation, and finishing touches.

“I love it when a plan comes together,” George Bates, the Crosswalk designer, and creator said. “One of the things that I’ve always been looking for is that it’s something that incorporated the community more directly into a project. So when I saw the plan for this project, and I saw that Artworks was attached to it, there was like this built in sort of community to do this sort of thing.”

Funded by a 2020 Bloomberg Philanthropies Asphalt Art Grant, the artwork features a mosaic of Trenton High School Students profiles along the intersection of South Clinton Avenue and Barlow Street/Raoul Wallenberg Avenue. The total project to 18 hours in total for over 30 people to paint four crosswalks.

“So the artworks team in conjunction with the Trenton artists crew that already exists here, the community of people and then also the kids who lent their portraits to the piece and became involved with the community volunteers, like it was a perfect storm to pull off this project,” Bates said.

Stepping into Tomorrow was made by a partnership between the City of Trenton and Artworks. Addison Vinson, Artworks Gallery Manager, talks about being inspired and proud of his colleagues involved in both projects. “I’m particularly proud of my contemporaries here that that did these two projects with other fantastic artists. You know, the city of Trenton is it’s a creative space. It’s in the city,” Vinson said.