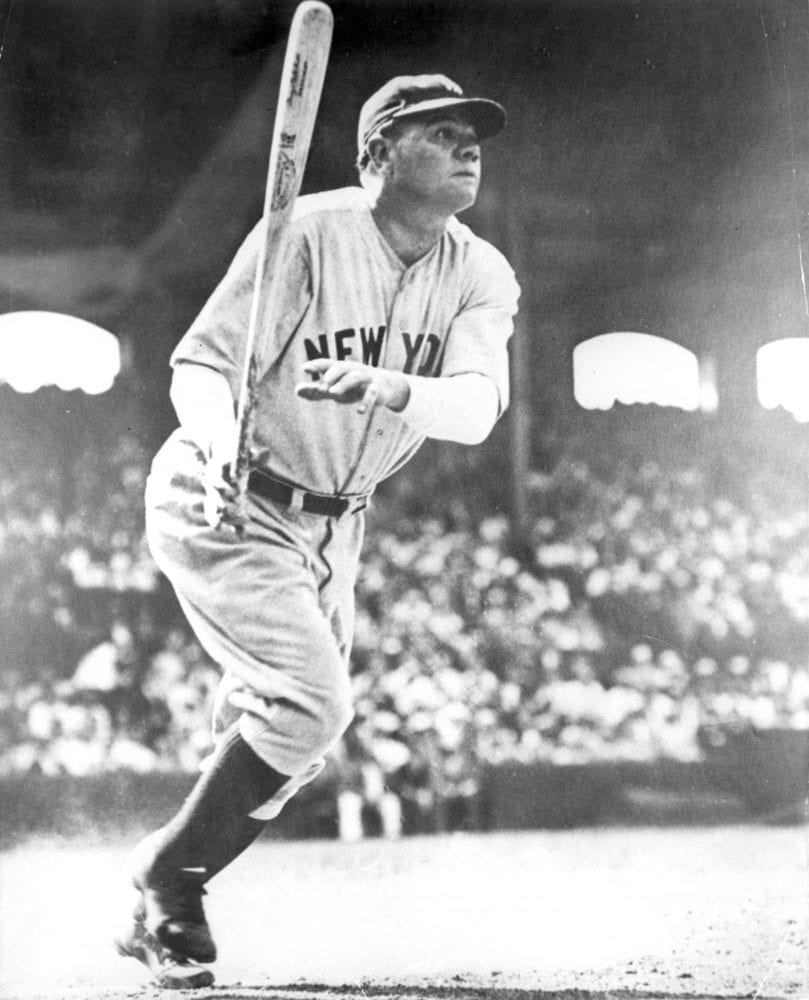 Fresh off a World Series Sweep of the Pittsburgh Pirates and three days after concluding a rather successful season that saw him break the single season homerun record as he clubbed 60 homeruns, breaking his own previous record of 59, Babe Ruth took to the streets of Trenton to embark on a legendary barnstorming tour.

The idea was conceived by Babe Ruth’s publicist Christy Walsh who sought to capitalize on the fame and notoriety of Babe Ruth and his successful campaign while earning a little extra income by playing exhibition games in various cities that otherwise might not get to see the Babe showcase his power in the Bronx.

As the World Series was coming to a close and this tour was getting planned there was one small issue. There weren’t many cities lined up yet. Fortunately for the Babe and Trenton, a young Sicilian immigrant named Joe Plumeri pushed through the crowd of 3,000 fans to hand Ruth an envelope. Inside the envelope were 10 $100 bills ($1,000). When asked by the Babe, “What do you got there?” Plumeri responded, “This is for you, if you’ll come and barnstorm.” Even though Walsh had originally planned to kickoff the tour in Portland, this offer enticed the team to kickoff their campaign in Trenton which came as a positive surprise to many Trentonians when Lou Gehrig announced the plans during a radio interview later that Sunday evening.

Around 1 p.m. on October 11th, 1927 the Babe, Lou Gehrig, and Christy Walsh pulled into Trenton’s Clinton Street Pennsylvania Railroad Station to embark on their tour across the United States. Here they were greeted by Plumeri and George Giasco, a prominent Trenton athlete at the time. Before the games were to take place these athletes had to fulfill their normal routine of photo-ops and meet-and-greets with dignitaries and public officials. First on the agenda was a trip to the State House to meet Governor A. Harry Moore and Trenton Mayor Frederick W. Donnelly.

On the same afternoon where Lou Gehrig was awarded with the American League’s Most Valuable Player Award for the 1927 season it was Ruth who received all the attention and spotlight. When meeting with the Governor Ruth is rumored to have said, “Meet Lou Gehrig, Gov.” Gehrig acting in his usual quite manner as the sidekick to Ruth blushed to which Ruth told the Governor, “The kid don’t say much”.

With a scheduled 3:30 p.m. start the crew traveled to Wetzel Field where the Bustin’ Babe’s would face off with the Larrupin’ Lou’s. The teams were comprised of local players and the Brooklyn Royal Giants from the Negro League.

In front of an official crowd of 3,500 plus another 3,000 or so schoolboys, Ruth would crush two homeruns over the right field fence onto Chambers Street causing him to round the bases with children clinging to his arms and wrapped around his legs. This pandemonium after each of the Babe’s shots would cause the game to end after he blasted his third homerun of the afternoon, a two run shot, in the eight inning onto Chambers Street off of Red Ruffing.

An army of boys chased him into the dugout, where he fell, heaving and sweating, into the laps of sportswriters and Trenton mayor Frederick W. Donnelly. “My God, they scared me stiff,” Ruth said, taking a minute to catch his breath. He wasn’t afraid for himself, he explained quickly: “I was afraid I would trample one of them—these spiked shoes would cut a kid’s shoes off.”

The Bustin’ Babe’s won the ball game by a score of 9 to 4. The Babe and Gehrig would leave Trenton and take their barnstorming tour to Asbury Park for the next game on October 13th, 1927.

Information for this article and quotes are from “The Big Fella” by Jane Leavy.