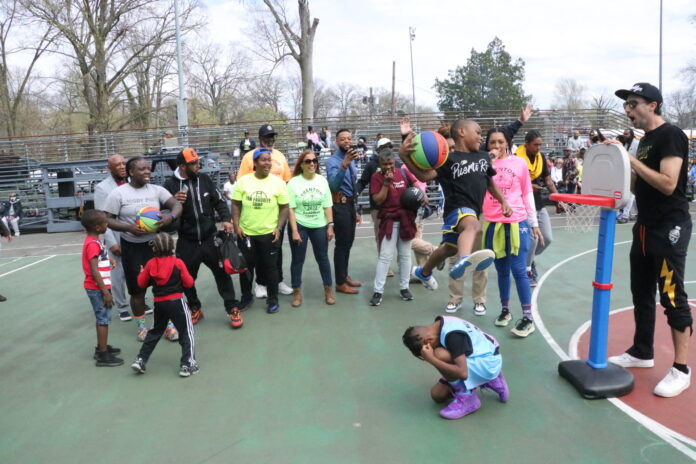 Dribbles and swishes returned to Cadwalader Park’s Basketball Court this Easter Weekend as kids ages 5 to 18 put on their shorts, tied up their sneakers, and scored baskets.

“We think that this is the right time to continue to promote basketball throughout the community. Trenton traditionally has been a community where the kids, the adults, everybody plays basketball in this town. This event will serve as the kickoff for our different leagues throughout the spring and summer,” said Maria Richardson, the City’s Director of the Department of Recreation, Natural Resources and Culture.

The evening saw lay-up competitions, three-point throw competitions, and scrimmages between Trenton youth in different age groups. Coaching the kids through it all was Lakeisha Sutton, a professional Basketball Player and Supervisor of Recreation with an emphasis on basketball. She stood in the middle of games, shouting into a microphone, being a one-person hype team, cheering on and pushing the young basketball players.

“I’m a professional basketball player, born and raised in the city, played on a full college scholarship, played in seven different countries, most recently with Harlem Globetrotters. Just bringing my resources and my connections back to the city to try to revamp the recreation department give these kids something to do,” Sutton said.

She explains that Trenton needs outlets like this to change the city and model it into a place where kids can grow up. “It’s important because I think kids need outlets, and we need role models, and we need families to come out of their house and not be afraid to be in a city. I grew up here. I played in a million different leagues when I was a kid. So I’m trying to be a part of that change,” Sutton said.

Trenton residents think this is an excellent first step. Keidrick Davis, a Trenton resident, was out watching his nephews compete against each other on different teams.  “Kids are out here with nothing to do. Instead of taking things to the streets with the guns, they can take to court with the basketball,” Davis said. “It teaches them life skills, being a team player, commitment, and something for everyone to do, they can come out as a family.”

At 4:30 p.m., there was a change in the air as a rivalry, as old as Trenton itself, walked on to the court. The Trenton Police Department and the Trenton Fire Department put down their uniforms and dressed in t-shirts and shorts to face off. There were wild cheers and sportsmen-like jeers from spectators on bleachers and uniformed firefighters and police officers at every score, play and miss.

John Day, Trenton Resident and Former State Police Lieutenant, who attended, explained that the police and fire department is what needs to happen in the city. “It is great to see former Trenton Police and Trenton Fire Department and the community interacting. When I look at it, they feel really comfortable, the kids are having fun… we need more of this, not just on holidays, but on a weekly basis,” Day said.

The two departments were neck-in-neck for the entirety of the game, trading three-pointers and lay-ups as they ran up and down the court. In the game’s final seconds, the police beat the firefighters after a three-point shot broke the tie finishing the game 28 to 25.

Mayor W. Reed Gusciora explained that this event was a win for Trenton.  “It’s a great day for recreation…it’s great when so many families come out, and children of all ages are coming here…,” said Mayor Gusciora. “(It’s) a way for the community to get to know these guys and girls on a human level and it also helps in recruitment. I already had one small kid say he wants to be a policeman, so it is important that police and fire continue to do this and engage with the community.”

Overall, the Department of Recreation, Natural Resources and Culture count this as a win.  “Now you can see and feel the spirit of the children and adults here at the park,” Richardson said.  “This hasn’t happened for a long time; this is community.”