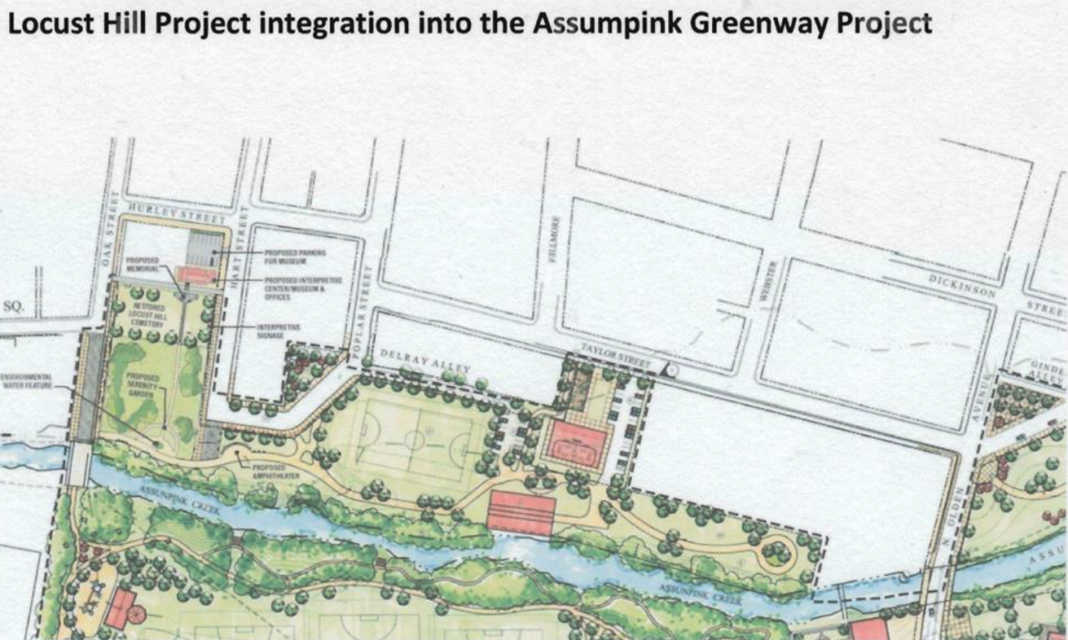 The Locust Hill Cemetery of Trenton is the burial ground for over 140 African American citizens of the City of Trenton. These citizens include those whose remains were moved in the early 1860s from the Mount Zion AME Church cemetery on Hanover Street and those who were buried there subsequent to opening the cemetery on Hale Street at its present location into the late 19th century.

After years of neglect, a group of interested Trentonians, known as The Locust Hill Project Development Team, led by Project Manager Algernon S. Ward Jr. and the 6th Regiment United States Colored Troops Re-enactors, are working with the City of Trenton to preserve the cemetery as a sacred space, highlight the lives of African Americans buried there and illustrate the history of racial injustice and progress in Trenton.

This Saturday, April 17 from 9:00 a.m. to 12:00 p.m., the restoration continues with a clean up day sponsored by the Kiwanis Club of Trenton. 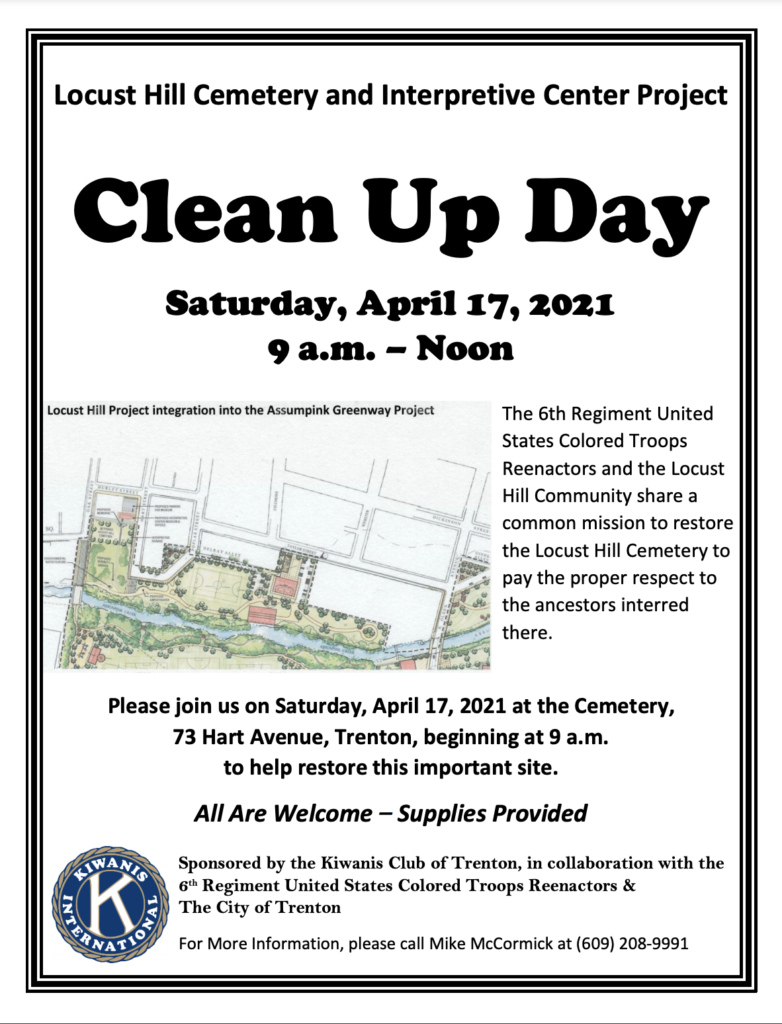 “It’s a vision right now; it’s a great vision, but not too much progress yet,” said Michael McCormick of the Kiwanis Club of Trenton. “However, there’s a lot that we can do there, as a community, to get that project started. [There’s] a lot of impact that we can have on that community right now.”

In addition to the 6th Regiment United States Colored Troops Re-enactors, The Locust Hill Project Development Team is comprised of representatives from the The East Trenton Collaborative, The City of Trenton, Isles Inc., The Garvey School, Trenton Historical Society, 1804 Consultants, The 1719 William Trent House, Clarke, Caton Hintz Architects and The Williamson Law Firm. The Kiwanis Club of Trenton is happy to support this unifying group mission.

According to McCormick, the Locust Hill Development Project Team is not only making improvements to the City of Trenton at large, but is taking into consideration the opinions of the surrounding community.

“Unfortunately, what sometimes happens with projects like these, is that plans are made and then the people who are affected by it find out. Inevitably, the people are upset,” said McCormick. “The way to do this, really, is to make the plans with the neighborhood, so that it’s not a matter of finding out after the fact; they’re engaged and part of the planning process.”

He continued, “That’s why Algernon’s efforts with the East Trenton Collaborative is so important, because he’s very much incorporated them and cooperated with them to get this rolling.”

Ward and these leading organizations in Trenton have spent years collectively gaining feedback from Locust Hill locals to gauge their vision for the area. Through a series of community meetings and surveys, the locals have expressed their thoughts.

“It’s important to have our ancestors respected and celebrated,” said Klagg Avenue resident, Kim Booker in a Locust Hill Project survey. “[The project is] definitely needed in the community.”

Another resident, Rev. Marvin W. Ford, who has lived in the Locust Hill area for over a decade, thinks it’s about time the area sees revitalization. “[The project is] a great idea; one that is well over-due,” he said. “The contributions made by African Americans and other immigrants to save the Union cannot be underestimated.”

The Locust Hill Development Project Team has grand plans for the space. Once the general clean up is complete, the ongoing restoration of the Locust Hill Cemetery grounds will include fencing, interpretive signage and valences featuring the name “Locust Hill” adorned with a Locust tree filigree above the gates. Two monuments will be placed near the main entrance containing the names of the civilians and Civil War Veterans interred in the cemetery. Stone seating will be located near a walking path. Plantings of native Locust trees will be placed near Hart Avenue and NJ Red Oak trees will be planted near Oak street. The pieces of a recovered headstones will be returned to their rightful place in the cemetery.

With due time, the Locust Hill Cemetery plans to go above and beyond and feature a continuation of the walking path to a contemplative space requested by the residents called a “Serenity Garden”. That too will be adorned with decorative plantings and a water feature consisting of a large stone hosting a waterfall and minnow pond. Neighborhood families will have the opportunity to purchase and install individual commemorative brick pavers on the walking path.

Additionally, the project will install environmentally friendly decorative lighting to be placed along the walking path that blends with the greater Assunpink Greenway Park Project. Through this ambitious vision, the team aims to achieve three essential restoration goals: install appropriate signage; beautify the area; and involve Trenton youth.

“We have an ambitious vision for this area, and the people there are really excited about seeing this restored,” said Ward. “The city is wise enough to realize that if this project is successful, it can be the linchpin in that whole neighborhoods’ restoration.”

According to Ward, the Locust Hill Development Project has the potential to set an example for how Trenton communities can come together to create positive, permanent changes.

“Projects like this have served to pull the community together with a common goal. That’s the most impressive and exciting part of this,” said Ward. “We intend to use it as a vehicle to organize the community and get us working together for a common goal that everyone benefits from. So that’s the real, unseen benefit of a project like this. It really does pull us all together.”

He continued, “It’s becoming the focal point that these organizations could gel around and I’m just so happy to see that happen. I think it’s the prototype for how we undertake community projects going forward.”

Tomorrow’s clean up day has already accumulated a number of volunteers, including the  Trenton Boy Scout troop 431, the Lawrence Boy Scout troop 28, the Rider University Circle K group and the East Trenton Collaborative. To join the effort or for more information, call Michael McCormick at (609) 208-9991.