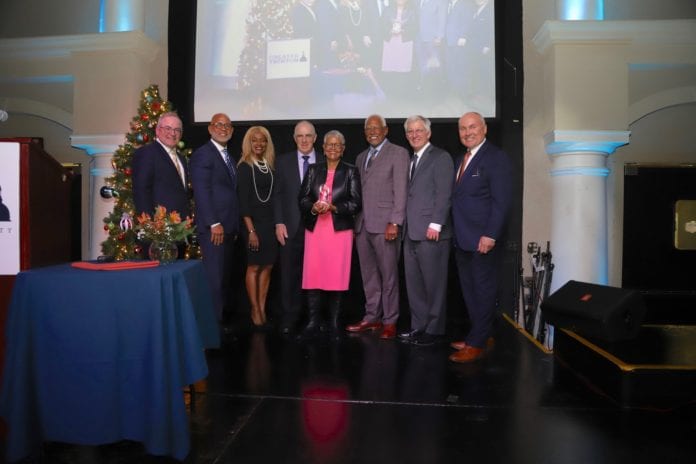 The weather behaved yesterday, December 16, 2019, as hundreds of people came together in the spirit of collaboration and engagement while enjoying an extraordinary evening view of Trenton’s storied riverfront at Cooper’s Riverview. The event marked Greater Trenton’s 2nd Annual Caren Franzini Capital City Award Celebration bringing together more than 200 attendees and inspiring deep collaboration among some of the most influential leaders impacting the Capital City.

Congresswoman Bonnie Watson Coleman, a long-time and influential advocate for the people of Trenton and throughout New Jersey, was presented with the Caren Franzini 2019 Capital City Award.

During the ceremony, an inspirational video entitled “Why Trenton?” produced by Greater Trenton Vice President Bryan Evans, was met with applause as the high-energy crowd expressed excitement about the importance and meaning behind this annual gathering. A redacted version of this video will be released generally later this week.

Led by Greater Trenton’s Chair Anthony “Skip” Cimino and CEO George Sowa, the annual celebration attracts prominent community, government, and business leaders. Serving as the first co-chair of Greater Trenton along with Bernie Flynn, former president and CEO of NJM Insurance Group, Ms. Franzini was dedicated to bringing jobs, businesses and places to live to the downtown. Reflecting on her tremendous impact and emboldened by the momentum she brought to the Capital City, Mr. Flynn suggested the creation of The Caren Franzini Capital City Award which morphed into the idea of an annual celebration that would revisit Caren’s vision and revolutionary work in support of Greater Trenton’s mission.

A portion of the monies raised from this event will be invested in Trenton’s youth through a scholarship fund that directly develops strong writing, public relations and communications skills right here in downtown Trenton. As part of this process, Greater Trenton invites aspiring journalists, who serve as high school seniors in Trenton, to work with TrentonDaily as paid Summer interns.

The celebration was spearheaded by a committee of business and community leaders, co-chaired by Brenda Ross-Dulan, Principal at the Ross Dulan Group, LLC and Mike Van Wagner, Vice President of Public Affairs for NJM Insurance Group.