Home Features History Growing Up in Trenton: Happy Memories in the Depths of the... 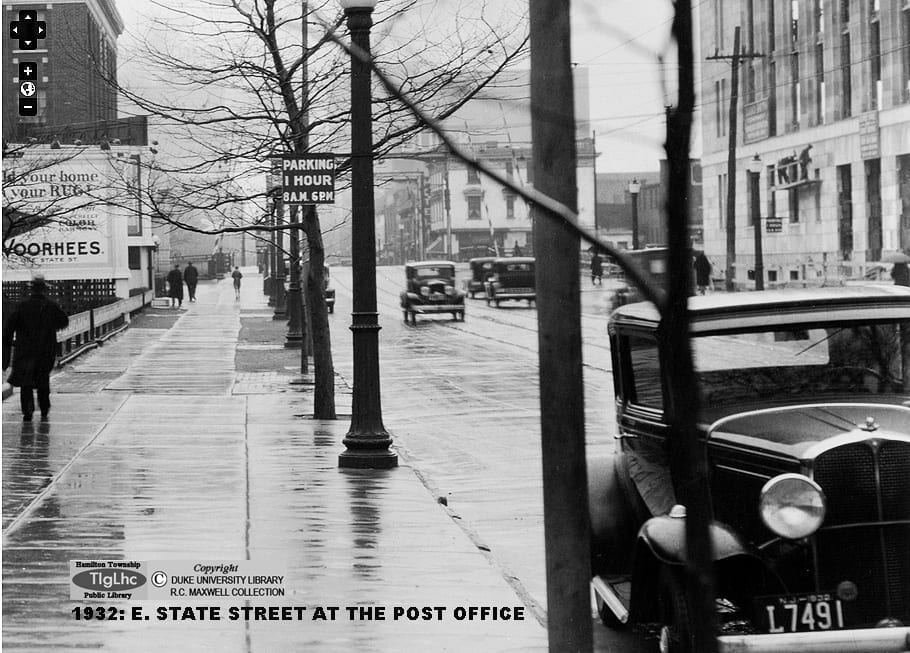 The Great Depression uprooted my family and swept away everything we had – just as it did to tens of millions of other Americans. We found shelter and the support of friends in Trenton, New Jersey. The Depression years of the 1930s were tough for my father Henry Dennis Martin, a proud, hardworking Irish-American widower struggling to raise six children, but we kids hardly knew it. From those years in Trenton, I remember mostly the laughter and warmth that filled our homes wherever we lived – and we moved around a lot during those Depression years.

A Winding Road to Trenton
Daddy had been raised by Catholic nuns in a New York orphanage. By the tender age of 14, he had completed an apprenticeship as a steamfitter and left the orphanage for good to live with our Uncle Denny. Uncle Denny put young Henry Dennis Martin to work washing bottles in the basement of his midtown 8th Avenue saloon. A few years later, Daddy had married my mom at Sacred Heart Church in Hell’s Kitchen. The couple moved out of New York City for a better quality of life in North Bergen, New Jersey.

Daddy prospered in New Jersey. He worked his trade as a steamfitter. He was active in local politics. He sold real estate and bought his own home. He saved, and he finally bought a farm to raise his growing family of six children on Ten Mile Run, near Princeton. Those were happy days for his young family, until fate struck in 1927, and he lost his beloved wife, Isabelle, to pneumonia.

I was five years old when my Mom passed away. My older sister Isabelle was seven, and my baby sister Rita was just two. It must have touched a nerve when our relatives from New York urged Daddy to give the three of us over to the care of the nuns at Our Lady Star of the Sea. Daddy would hear none of it. He said simply and firmly, “The children belong with me.”

Daddy sold the farm. He bought a house for us on Murray Place in Princeton and hung a shingle on his new business, “Henry D. Martin Real Estate and Insurance.” His business thrived. Daddy prospered … until the stock market crashed in 1929. Daddy’s business collapsed. We lost our Princeton home.

Daddy stood ready to accept any kind of work. There were simply no jobs in Princeton. He was broke, with no resources left, at all, except his prodigious charm and the many friends he had in politics and business who knew him, liked him, and trusted him during the good times before the economy collapsed. Some of these friends were in Trenton, in positions of influence during the administration of Governor Morgan Foster Larson. And some of them reached out to help Daddy.

The Deaf Mute School
The New Jersey Deaf Mute School on the Chambersburg side of Trenton was a casualty of the Great Depression. The school had been closed and shuttered since funds had run out, and students were no longer enrolled there. Daddy was offered a job, without wages, as the Deaf Mute School’s night watchman. The job had one benefit: a home for our family – the headmaster’s residence on the campus of the school at 205 E. State Street. We needed a home. Daddy accepted it.

To us kids, our new home at the Deaf Mute School looked like a palace. The residence stood on a vast, uninhabited campus, with grand steps leading up to a double-door entrance. Inside was a great reception foyer with a staircase leading up to an interior, second-floor balcony. Beyond the reception foyer was a cavernous living room with an expanse of hard wood floors suitable for sliding in stocking feet. There were plenty of bedrooms upstairs, with balconies looking down on the first floor. It was a magical place.

Daddy enrolled us in the Immaculate Conception School – his primary responsibility as a good Catholic parent. He had a job with no wages. He had no money. Yet somehow, Daddy acquired crisp, new school uniforms for my sisters and me, and he convinced the nuns at the school to waive tuition until he got on his feet.

He was on his feet soon, with his appointment to a paying job as Chief of the Trenton Capitol Police! We had regular food on the table, then, and a fine roof over our heads. Daddy took in a live-in housekeeper from Chambersburg, who brought along her toddler son. There wasn’t much money, but Daddy could provide meals and a place to live. Life there was good.

I didn’t know until years later that some controversy swirled around our situation. Developers wanted the land where the shuttered Deaf Mute School stood. Daddy’s jobs as the night watchman and Chief of the Capitol Police became election year fodder for Democratic Party critics of Republican Governor Larson’s administration. Muckrakers wrote articles about us in the political press.

The origins of these events actually started years earlier, when Daddy had been a Democratic Party activist, himself, until he had a falling out over the 1917 election of the infamously corrupt Frank Hague as mayor of Jersey City. In protest, Daddy nailed a funeral wreath to the door of the Democratic Party headquarters. But that’s a whole new story….
In any case, Democrats came to power with the 1932 election of Governor A. Harry Moore. The new Governor eventually named his own Democratic appointee for Chief of the Capitol Police, and Daddy’s no-wage job at the Deaf Mute School came to an end.

The Stuyvesant Avenue Years
Again, one of Daddy’s Trenton friends held out a helping hand. In his courtroom, Judge Schroth presided over repossessions and sales of Trenton properties that were foreclosed during the Depression years. Dockets were backlogged, and nobody had an interest in allowing properties to be vandalized or fall into ill repair while they were vacant. So Judge Schroth, Daddy’s friend, invited our family to move into a property under his jurisdiction at 646 Stuyvesant Avenue.

We moved into the lovely middle-class home, and Daddy enrolled us in Blessed Sacrament Catholic School on Bellvue, which I attended through 8th grade. The Blessed Sacrament Parrish had planned to build a church. They had run low on funds, so they built a school first, and celebrated mass in the basement. There was a vacant lot where the church was to be built, which made a handy playground. For us kids, those were happy days. My sisters and I had lots of friends in the neighborhood and at our school. In the summertime, we bicycled up Stuyvesant Avenue to swim in the canal that ran through Cadwalader Park, along which the WPA had built a sand beach, and the City provided lifeguards. On snowy winter days, we dragged our sleds up the Avenue to slide down the hills in Cadwalader Park.

But for Daddy, these were tough times. He was often out of work and spent days waiting in lines with many of our neighbors to get rations of bread and cheese and occasionally fresh vegetables in the summertime. Daddy had survived the Spanish flu pandemic of 1918, but the flu had left him with a chronic sinus infection and a hacking cough that grew worse over time.

Still, Daddy made sure we felt safe and well cared for. He ran a tight ship. We dressed up in Sunday clothes and shoes for mass on Sunday mornings. My brothers had to polish everyone’s shoes before we headed out to the children’s mass in the Blessed Sacrament School basement. We always knew whether Daddy had followed us to mass, because we could hear him coughing. After mass, the family went home to a formal Sunday dinner, where somehow, Daddy always had meat and vegetables on the table.

As the Depression years wore on, Daddy landed occasional work as a night watchman. My eldest brother Eddie graduated high school at age 14. He was able to help Daddy out by contributing $5 a week earned at a job that Daddy arranged for him at AT&T. Eddie kept the job and contributed to the household throughout the course of his law studies at Georgetown University. The house at 646 Stuyvesant was sold, finally, and we had to move out. We rented a small, row house down the street at 525 Stuyvesant Avenue.

Trenton was beginning to emerge from the Depression. The world was changing around us on Stuyvesant Street, and my family was changing, too. My eldest sister Peg fell head-over-heels in love with a German-American guy named Kenneth who came to Trenton to live with his aunt after getting discharged from the Navy. There was work at Crescent Wire Company making cable to hold the Golden Gate Bridge, which was under construction in San Francisco, and Kenneth landed a job on the night shift.

Europe was in turmoil. Japan invaded Manchuria. My second eldest brother, Henry, joined the Navy. My beautiful, blue-eyed sister Isabelle quit high school to work at a family-run soda fountain across the street from Cadwalader Park.

Stepping Out
My big sister Peg and Kenneth eloped and got married. They rented their own apartment at 140 West State Street, right across from the State House. Peg was having a difficult pregnancy, so Daddy sent me off to live with them, to take care of Peg while Kenneth worked the night shift at Crescent Wire.

When I moved in with Peg and Kenneth, I was in my senior year at Cathedral School for Girls, run by the Sisters of Mercy. I transferred to Trenton High, where I finished my last six months before graduation. At the Catholic schools I had always attended, students had come mainly from Irish-American families like mine. Trenton High opened a whole new world. I made new friends from all kinds of backgrounds. My classmates included boys. I was having a ball – so many new friends. It was the introduction to a much bigger world that I was about to enter.