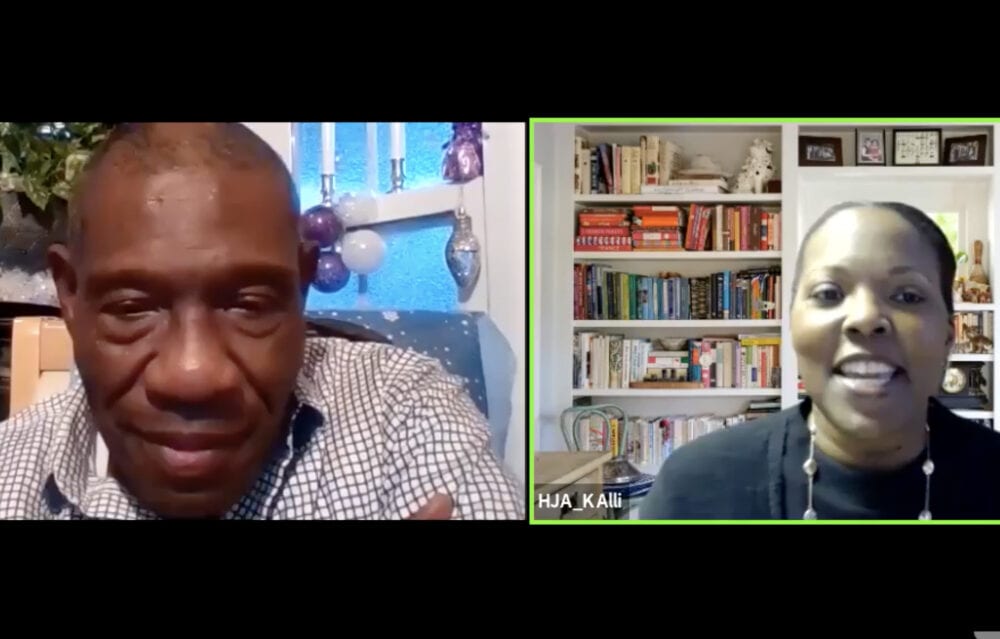 Johnson, who moved to Trenton from Jacksonville, FL at nine years-old, was initially a drug and alcohol councilor for 17 years at New Horizon before being introduced to the Henry J. Austin Health Center. On January 20, 2021, Johnson will hit his two year mark working for the organization as a community health worker.

“I think it’s just amazing; [Johnson’s] commitment to this community,” said Dr. Alli. “The jobs [Johnson does] are not easy… As we know, life is challenging, particularly for those individuals that are struggling with addiction, and to overcome that, [Johnson’s] support has probably been really integral in helping them through that challenging and really difficult time.”

For over 22 years, Johnson himself has been drug-free. Part of his life journey influenced him to do the work he does for the health center. On a personal level, Dr. Alli said addressing Johnson, “You continue to be an inspiration to me, and that’s why I wanted people to hear your story so hopefully you could be an inspiration to others.”

As a veteran, Johnson learned about the Pfizer clinical trial after visiting his doctor through Veterans Affairs (VA). “My doctor said they’re having a study and they’re looking for African American volunteers,” said Johnson.

After attending a meeting a couple days later with Dr. Alli about African Americans receiving receiving vaccines, Johnson was sold on the decision to go through with the trial. “When I called my doctor back he said, ‘are you sure’ and I said, ‘I got my confirmation in a 4:30 p.m. meeting,'” said Johnson.

According to Johnson, his VA doctor informed him of the trial on a Friday, he had his meeting with Dr. Alli on the following Monday, and then had his first vaccination shot that same week on Thursday, September 24, 2020.

In the process of taking part in this trial, Johnson recruited six community members to take part in the experience. Two individuals dropped out due to the travel that had to be done to receive the shot. However, the other four friends of Johnson’s continued.

At the time of the initial administered shot Johnson received, along with the second one he got on October 13, the Pfizer vaccination was not yet certified by the FDA. However, once news spread that the FDA approved the same trial vaccination Johnson partook in, he received a phone call from his doctor.

“Once it was submitted to the FDA for approval, they started calling everyone that was part of the study, and the people who actually got the placebo, and they were telling them that if you got the placebo, you have first dibs on the vaccine, voluntarily if you choose to,” said Johnson. “[My doctor] said ‘Mr. Johnson, you don’t have to worry about that. You already was given the vaccine. You got both shots already so you don’t have to do nothing.”

According to Johnson, after hearing he had received the real vaccination, a sense of relief came over him.

“When he told me that I had gotten both vaccines, I laid on the bed waiting for Monday night football, and this was about 5:30 p.m. in the evening, I laid in the bed and woke up 20 minutes after 4:00 a.m.,” said Johnson. “Normally every two or three hours I have to run to the bathroom and it wakes me up, but this night I slept straight through.”

He continued, “I didn’t realize how much stress and anxiety that had on me, that I could [now] just relax like that.”

It was important for Johnson to take part in this experience as an African American man.”[Doctors] were wanting and asking for people of color, ladies as well, not just male.”

According to Dr. Alli’s recollection, both the Pfizer and Moderna trials were well diversified with around  9 to 10 percent of individuals in the studies being people of color and around 15 to 16 percent being Latinos. “That’s not generally heard of in a lot of trials,” said Dr. Alli. “People of color, because of the history, have tended to stay way and I think [Pfizer and Moderna] have done a pretty good job of just being really proactive in getting individuals of color and individuals of ethnic groups to participate so that it’s really a diverse study and we know that this vaccine works for everybody.”

Currently, as communities across the globe fight to be first in line to receive the COVID-19 vaccination, Johnson is feeling especially grateful for the opportunity. Not only does Johnson have a vaccine that millions are eager to receive, but he also is able to share his experience with those who may doubt the process and lack faith in the vaccine.

“I do know a lot of people, especially in the Trenton area. The ones that are close to me know who I really am. They were like, ‘It’s good to put that to a face. Now I know somebody who really had it'” said Johnson. “They ask me all the questions and I explain it to them as thoroughly as I could… When they hear me say that they say, ‘Man, if you did it, I’ll do it.” He continued, “I’m just glad to be that inspiration for people.”

As the government continues to contextualize the vaccine and create ways for it to become more readily available, Johnson continues to encourage others to take advantage of vaccination opportunities as they present themselves. And even though Johnson has received his vaccine, he still eagerly pushes for everyone to continue following CDC safety protocols, vaccinated or not.

Johnson said, “Still now, I still have to wear my mask, I still do social distancing, I still wipe my hands clean, because there’s still a 5 percent possibility [of the vaccine failing], and also, it’s protecting others.”