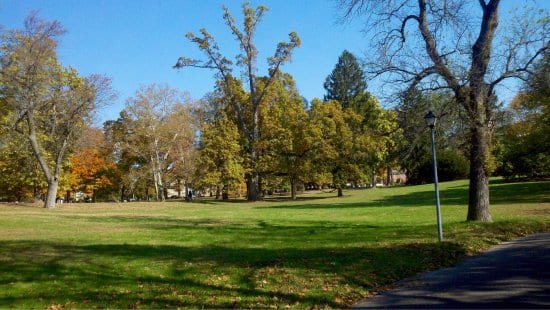 For Historic Trenton’s Day in the Life, we’re looking back through newspapers from the beginning and examining everyday problems, solutions, and needs during historic Trenton’s past. Today, we look back to the creation of a Trenton center piece, Cadwalader Park.

Frederick Law Olmsted was the renowned designer of Central Park and Trenton’s own Cadwalader Park. He is considered to be the father of American landscape architecture. His project on the Cadwalader Park began in March of 1890 after Olmsted received a letter from Edmund Hill, the manager of the Cadwalader estate. At this time, Olmsted had made himself America’s most sought-after architect, working on projects like George Washington Vanderbilt’s 6,000-acre Biltmore estate.

Olmsted accepted the letter from Hill and arrived in Trenton on April 11, 1890 to meet with him and Lewis Lawton, a local contractor in Trenton. An excerpt from the Cadwalader Park Alliance states: “They looked over the land for the park, then lunched with Hill in his temporary home, Cadwalader Manor, where Olmsted ‘gave us good advice.’ Olmsted returned to Brookline the same day. That night, Hill wrote in his diary: ‘I am glad he came.’”

With the meeting going well, Olmsted began to plan for Cadwalader Park. With the help of Olmsted’s stepson John C Olmstead and Elbridge G. Weir, a city surveyor, the process would go on for about a month.

Cadwalader Park has the distinction of being the only park in New Jersey designed personally by Frederick Law Olmsted.  Since the park’s creation, it has become a staple of Trenton life, hosting zoos, the famous Trenton Balloon Man, and the even more famous Trenton City Museum at Ellarslie Mansion.