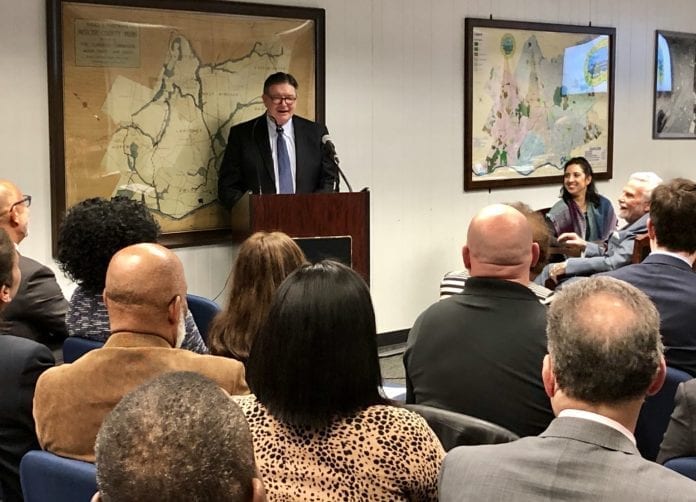 Maintaining that despite his administration’s many accomplishments there is still much work to be done, Mercer County Executive Brian M. Hughes today officially announced he will seek another four-year term in November.

“We have much to celebrate in that Mercer County is healthy, strong and battled-tested … but there is no time to rest on our laurels,” Mr. Hughes said during his annual State of the County Address, which he delivered to an overflow crowd at a formal meeting of the Board of Chosen Freeholders at the McDade Administration Building in Trenton.

Among the “unfinished business” the County Executive cited were the building of a new passenger terminal at Trenton-Mercer Airport; reaching a conclusion on the fate of the County Correction Center; and continuing his administration’s ongoing effort to support the County’s most vulnerable residents.

Noting that Trenton-Mercer Airport “plays an important role in the economic health of our region,” Mr. Hughes said that plans to replace the airport’s outdated terminal are progressing as the project moves through the design phase and Environmental Assessment process.

“We will conduct a public hearing in early summer on the full Environmental Assessment, which is required by the FAA,” Mr. Hughes said. “Modernization of our airport terminal continues to be the topic I am asked about most, and I am eager to see this project through to completion.”

Mr. Hughes said that finding a sensible way to address the “financial strain” that the aging Correction Center places on taxpayers, while also providing the services necessary to help incarcerated people make a successful return to their communities, continues to be one of the county’s most pressing issues. He said that based on preliminary financial analysis, regionalizing correctional services with another county, as other New Jersey counties have done successfully, could reduce Mercer’s overall budget by at least $12 million annually.

“Out in our community, our taxpayers and elected officials insist on us devising creative solutions to run a more cost-effective correctional system,” Mr. Hughes said. “As more counties look for ways to share correctional services, our need for a solution that makes sense grows more urgent. We began considering the future of our correctional facility six years ago, and we must draw a conclusion this year.”

Mr. Hughes, who was first elected County Executive in 2003, said the programs and services the county provides and supports through its Human Services Department will continue to be a priority for his administration. He pointed to the success that the county and its partners — including the Board of Social Services, the City of Trenton and the Rescue Mission – have had in reducing homelessness, an ongoing effort that has resulted in housing approximately 400 families and 600 singles in the past three years. And he said that while the county’s yearlong campaign to combat stigma associated with mental illness and addiction has garnered support and raised awareness, “mental illness continues to be a difficult conversation and it should not be.”

“Until we eliminate stigma and discrimination within our community, and create an environment for hope and healing, we must continue this effort,” Mr. Hughes said.

The County Executive said that many of his administration’s accomplishments have required overcoming obstacles to get the job done, including building a new criminal courthouse, saving historic Petty’s Run and reconstructing Jacobs Creek Bridge. More recent such accomplishments, and which also reflect the county’s good health, he said, include expanding recreational opportunities, such as diversifying Park Commission programming to better reach Mercer County’s underserved population, and putting people to work through a “Direct Hire” program. Direct Hire allows the county to supplement its existing workforce by tapping qualified men and women of the local union trades for specific projects or construction work on a temporary basis.

“I’m pleased that we found a creative approach to utilizing local, skilled workers, and I thank the Freeholder Board for its support of this concept,” he said.

Mr. Hughes said that just as county government has been tested, he has faced personal challenges too. He described having to live with, and learn to manage, a condition called trigeminal neuralgia that can inflict severe pain to the nerves along his jaw.

“I believe that having to endure this has strengthened my resolve,” he said. “It has made me more determined than ever to finish what we’ve started here and achieve results that will make our county stronger and help create opportunities and increase prosperity for our residents.”