Home Features Community Jacque Howard: We’re All in This Together 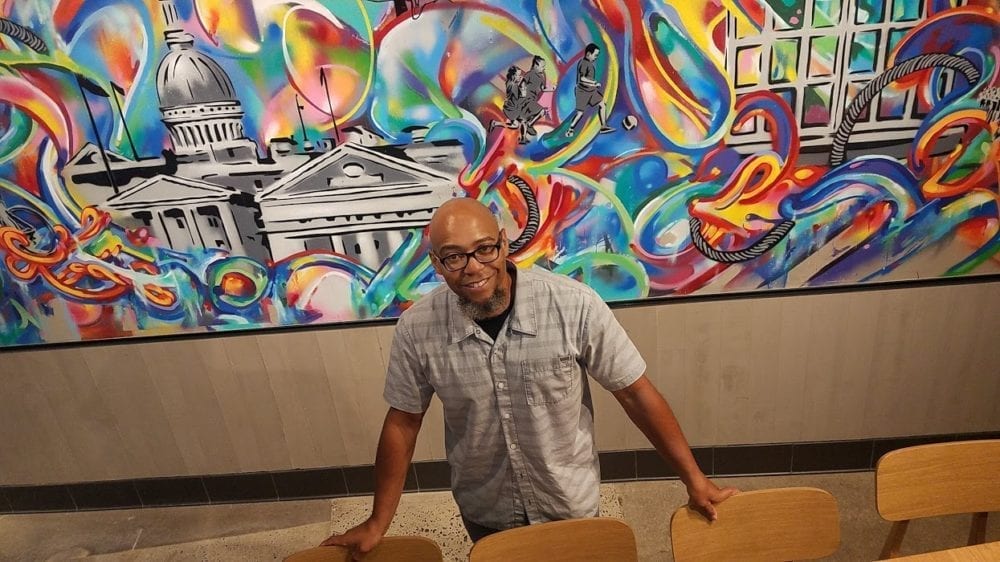 As a proud resident of Trenton, father and husband, Jacque Howard is committed to utilizing his leadership and communication skills to help people throughout the city and beyond. He founded Trenton 365 to advocate for and endorse private citizens, nonprofit groups and businesses in the greater Trenton area. You’ll hear Jacque’s voice reverberating through radio and cyber waves at WIMG AM 1300, WWFM 89.1 HD2, wimg1300.com, jazzon2.org, and on his Trenton 365 show at www.trenton365.com.

Coming from a large family of seven children, Jacque’s life experience is reflective of his mother’s who was one of 13 children growing up. Having lived just two doors from his maternal great aunt and three doors from his maternal grandparents, there were always people around including aunts and uncles, parents and grandparents, brothers and sisters, cousins, and friends of family. From an early age, Jacque was influenced by this close-knit group intricately bound by deep social and cultural ties.

“I recall conversations with my grandfather. He was a union representative for General Motors and he always spoke about the importance of respecting who you were and treating people fairly and with respect,” said Howard. “That’s one of the principles that defined who I have become as person.”

Working hard to support the family, Jacque’s father instilled a strong work ethic; leading by example. However, Jacque’s relationship with his uncle Isaac served as a pivotal source of cultural development growing up. After all, Isaac was the one who exposed Jacque to a world of new ideas and activities including social etiquette, travel, and attending various cultural events. Where did Jacque obtain his love for motorcycles? His uncle Isaac. How about Jacque’s eventual love for fast race cars? His uncle Isaac…

Jacque, who celebrates his 50th birthday this year on December 12, was taught early on that regardless of race, ethnicity, socioeconomic status or anything in between, we’re all in this together. In fact, from his younger days to his present, he has always had a passion for community.

“Developing relationships to build communities is who I am at the core,” said Howard.

Conducting thousands of interviews, engaging in projects like Library Boxes of Trenton, documenting music, showcasing local original music, helping to create the Bethany House of Hospitality, and being involved in his faith-based community at Westminster Presbyterian Church, are only a few of the things keeping Jacque so busy. As he works to fine tune these and other activities, Jacque is pulling together key media partners to engage in various initiatives to help drive the idea of community organizing and social justice.

Among other things, Jacque serves as the host of and “Ambassador” for the Levitt Amp Summer Concert Series. In this role, he shares information about the event via his interactions with the community, social media, and through his radio and online venues. For the fourth year, the Levitt AMP Trenton Music Series presented by the Trenton Downtown Association has activated Mill Hill Park in the state capital’s historic downtown core, building upon the progress of the past three years, spurring economic activity and community participation, giving people of all backgrounds a place to connect and enliven their community through free, live music.

“It’s undeniable that Trenton is where George Washington became George Washington as we know and think of him today,” said Howard. “This was his start. We need to honor and recognize our history, because a further look into Trenton’s past tells us more about what was taking place here including the cultural diversity – Native Americans, free and enslaved people of African descent, the indigenous population as well as the white and indentured servants that were here at that time.”

“Recognizing the history and where we are now, we have an opportunity to design what our future is going to look like and design it in a manner that embraces our diversity, but also embraces our history, strategic location and other critical assets,” SAID HOWARD. “We have an opportunity to harness the creative economy that is here in Trenton – not only from a visual and performing arts perspective, but from an architectural perspective.”

Jacque sees community involvement and engagement as vital to Trenton’s future. When it works well, it becomes the heartbeat of a well-functioning society.