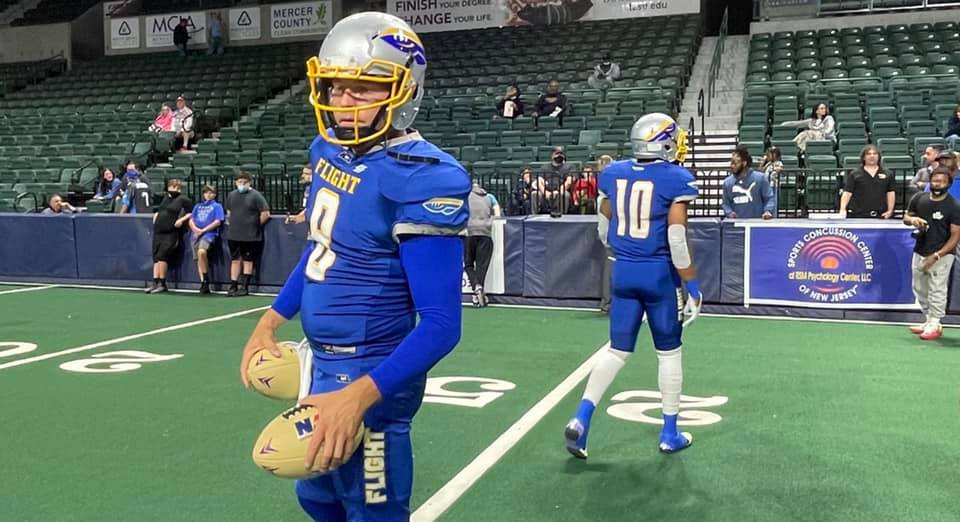 The Jersey Flight saw their season opener and inaugural National Arena League game at CURE Insurance Arena in Trenton, NJ spoiled yesterday by the Carolina Cobras, who kicked a game winning-field goal as time expired in a 45-42 final.

As reported by Matthew Kass on May 29th, The Flight struck for the first score of the game, when WR Jared Dangerfield ran it in for a one-yard score with 10:09 remaining in the first quarter. Pat Clark added the extra point, and the team jumped out to a 7-0 lead. Carolina would get a QB keeper from Sam Castronova to tie it up at seven at the end of the first quarter.

Dangerfield would run another touchdown in and catch a pass from Smith later in the game.

Jersey also got offensive contributions from WR Tyron Laughinghouse, who had two touchdowns on the game. His second, with just ten seconds left in the fourth quarter, helped draw Jersey level, before the Cobras’ K Tony Stevens kicked the game-winning field goal through the uprights.

Laughinghouse’s other touchdown catch was a spectacular leaping grab, in which he tumbled headfirst over the boards, only to re-emerge with the football in his hands for a score.

QB Warren Smith Jr. tossed three touchdown passes and ran one in for another score in the loss. The defense applied plenty of pressure as well, sacking Castronova three times in the game.

For the Cobras, WR Kendrick Ings made the difference in the game. Ings had four touchdown catches in the second half, three of which came in the final quarter. Several miscues during the game also flipped the final score the Cobras’ way, including a mishandled bar ball by the Flight on a kickoff and a fumble that the Cobras recovered early.

Speaking with assembled media postgame, Flight General Manager and Head Coach Terry Foster said that he and the rest of the team would learn from week one and use it to progress.

“Week ones are always difficult, because you don’t know what your opponent’s going to bring,” Foster said. “We saw some things that we definitely didn’t prepare for, but that’s on me. I’ll get better at that and the team will get better.”

Foster said, “coming out of this week, I learned that I have to do a little better job at getting them prepared to play in games, got to do a better job with making plays on special teams […] and then we’ve just got to finish plays. We missed a lot of tackles, fumbled a lot of snaps, but we’ll get better.”

And for Smith Jr., he said that shaking the rust off after a COVID-induced two year pause was something the team was eventually able to do in the game. He also noted that in typical arena football fashion, the game hinged on a few key moments.

“No one’s played in two years basically, so [we] got off to a little bit of a rocky start with the snaps and stuff like that, both sides of the ball,” Smith Jr. said. “But both teams competed, they’re both playoff-caliber teams.

“[The Cobras] have some all-stars over there, we’ve got some all stars over here, but in arena football, you know it comes down to a couple possessions,” he added. “They got one stop, we got one stop, and they got the bar ball, so that’s the extra possession they get, they had the ball at the end. So with a competitive league, we’re going to have to make sure that we don’t give up possessions like that.”

Moving forward, Smith Jr. said that the players will take this chance to look in the mirror, improve upon their performance, and get ready for the rest of the season.

The Flight now have a quick turnaround before their next game, as the new-look Albany Empire come to town on Friday, June 4. Kickoff is scheduled for 7:00 p.m. The Empire are led at QB by Tommy Grady and feature former Philadelphia Soul wideout Darius Prince at receiver. The Empire also have a Flight connection on the coaching staff, with former Flight Coordinator Tom Menas being named as the new Albany Head Coach earlier this year.

FLIGHT LOG: The Flight had 16 total first downs in the game. 10 came by passing, five by rushing, and one was the result of a penalty…as a whole, the team gained 189 total yards of offense (182 passing, seven yards rushing)…they were six for nine on third down conversions and two for two on fourth down conversions…Smith Jr. was 23-30 with 182 yards passing on the game…Laughinghouse led the way in receptions with nine catches for 79 yards and a pair of touchdowns…The Flight were able to take advantage of sloppy play, forcing seven Cobras penalties for a total of 41 yards lost…Overall, the Flight possessed the ball for 29:57 of game time, nearly half the game.

Trenton’s own Jersey Flight professional Arena Football team is a proud member of the National Arena League (NAL). Owned by New Flight Enterprises, LLC., the team’s home games are played at Cure Insurance Arena in Trenton. You can follow the team @JerseyFlight on Instagram & Facebook, and @JerseyFlightfFB on Twitter.