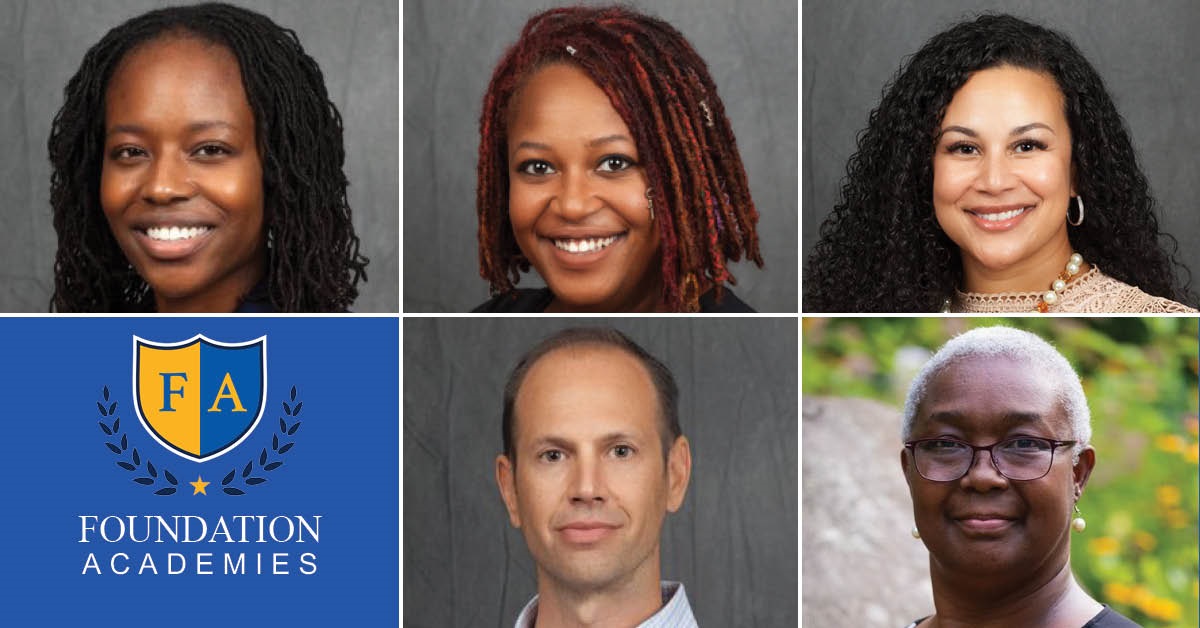 Foundation Academies today announced leadership changes that will allow the top-performing charter school to continue its mission of providing high-quality education to its more than 1,000 students on two campuses in Trenton.

In addition, the school announced that Dr. Shanesia Davis, who serves as FA’s Director of Training and Development, was appointed FA’s Chief Talent Officer, Isabel Goss, the Leader of Student Culture, was promoted to Principal-in-Residence and Johanna Soto has been promoted to Operations and Finance Manager effective July 2022.

“We are extremely confident in our incoming leadership as they have proven skills to continue the trajectory of academic excellence that has been a hallmark of our school,” said Kimme Carlos, who, herself, was recently elected chair of FA Board of Trustees.

McRae started her career as a Teach for America corps member in Newark after earning her bachelor’s degree in psychology from Howard University. She joined FA in 2010 as a middle school English teacher, and she then moved on to serve as the school’s Dean of Instruction. She became the Middle School principal in 2013 and was named to her current position in 2017. She earned her master’s degree from Montclair State University in school counseling.

“Mrs. McRae is a passionate and proven leader, advocate, and champion for children,” Carlos said. “The Board enthusiastically agreed upon and unanimously voted on the appointment of this extremely capable leader with deep institutional credibility.”

Weiss, who joined FA in 2009 as the Middle School principal, led the expansion of the lower grades. He was named the Chief Executive Officer in 2014. During his tenure, FA grew from two to four schools, more than doubling student enrollment.

Under Weiss’s leadership, FA has become one of the highest-ranking schools in New Jersey and has had eight consecutive years of 100% college acceptance. Weiss said McRae embodies FA’s mission and core values.

“She is a visionary of what is possible, is bold and courageous, and as a woman of color from Trenton, she has deep ties to our community,” Weiss said. “I look forward to hearing about the great things that FA will accomplish under her leadership.”

Davis, who will serve on the school’s executive team, will play a pivotal role in the organization by designing and implementing a vision for the talent team. She will also work to integrate FA’s diversity, equity, and inclusion beliefs and values through innovative and community-responsive practices that broaden and advance the staff member experience.

Prior to joining FA, Shanesia worked in traditional public and charter schools at several levels, advancing from science teacher to science department chair to vice principal to, eventually school principal and director of curriculum and instruction.

“I look forward to working with our staff to help identify and synergize the unique qualities of each individual so we may reach our collective full potential,” Davis said.

Goss, who joined FA in 2011 as a teacher, will spend the next year in the Principal-in-Residence program, which was created to build a pipeline of highly qualified school leaders who are knowledgeable and are being coached/equipped with the tools necessary to implement the FA model and lead FA’s schools and scholars to success.

“Isabel has worked at the middle school for many years in a few different roles, and we look forward to seeing her utilize her strengths and fine-tune her leadership skills as a Principal-in-Residence,” Weiss said.

In her role as Operations and Finance Manager, Soto will oversee the areas of facilities, safety and risk management, technology, food service, payroll and benefits, and transportation.

“Over the past 13 years, she has been involved in many of these essential school functions and we are thrilled to have such an experienced and passionate leader in this role,” Weiss said.