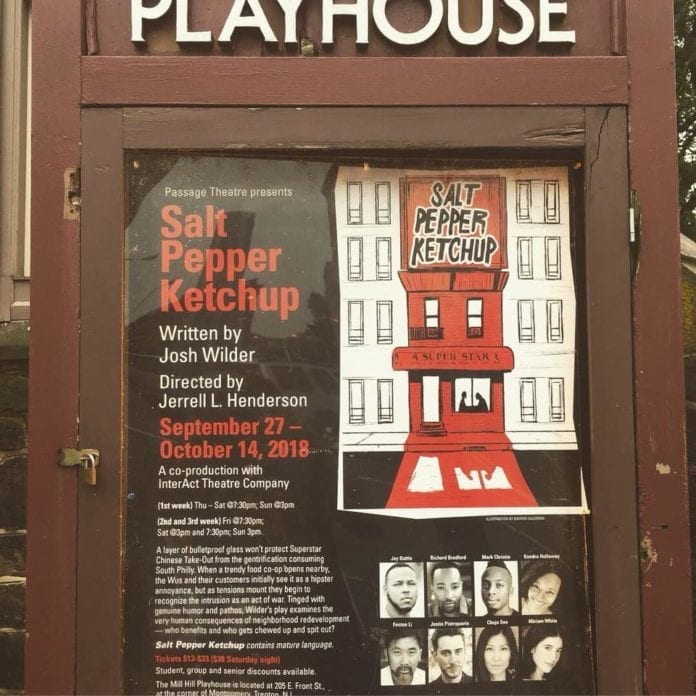 Passage Theatre at Mill Hill Playhouse was formerly a church shared by a few fledgling churches from 1902 until that tragic day on 1977 when a fire devastated the building requiring massive repair. The church was eventually acquired by the City and returned as a performing arts center in 1982. In 1985, it became the venue for Passage Theatre.

Now entering its 33rd season, Passage Theatre boats a robust schedule of original performances providing socially relevant content and reflecting the diversity and uniqueness of the Capital City. Evoking the richness of the human experience, the Passage Theatre focuses on combining the social and cultural assets of the city to create an experience that is socially relevant and engages the community on a level comparable to Broadway.

Salt Pepper Ketchup looks at what revitalization and neighborhood development truly means to people in a community and how to go about this responsibly.

Henderson describes the production this way: “A layer of bulletproof glass won’t protect Superstar Chinese Take-Out owners from the gentrification consuming the Point Breeze neighborhood in South Philly. When a trendy food co-op opens nearby, the Wus and their customers initially see it as a hipster annoyance, but as tensions mount they begin to recognize the intrusion as an act of war. Tinged with genuine humor and pathos, Wilder’s play examines the very human consequences of neighborhood redevelopment — who benefits and who gets chewed up and spit out?”

The play runs from September 27th – October 14th. There will also be a Community Dialogue to discuss the topics of gentrification, neighborhood development, and other themes of Salt Pepper Ketchup tonight, Wednesday September 19th from 6:30 pm -8:30 pm at Mercer County Community College’s James Kerney Campus, located at 102 North Broad Street.

To purchase tickets for Salt Pepper Ketchup or to learn more about Passage Theatre, visit them online at https://passagetheatre.org/. Also be sure to visit them at the Capital City Farmers Market on September 20th and 27th at Mill Hill Park from 10:00 am-2:00 pm, where they will be raffling free complimentary tickets to Salt Pepper Ketchup.