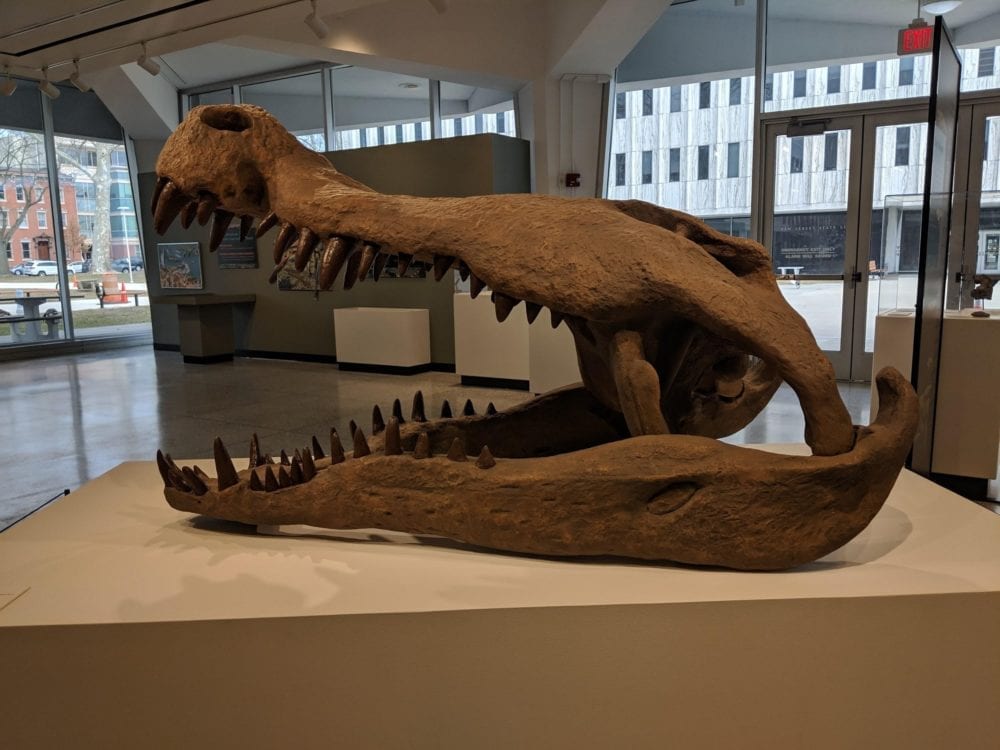 A skull the size of a bicycle sits on a pristine, white display block in a room that has more window than wall. The modern setting only serves to make the prehistoric object more intriguing. The skull once belonged to a large creature, Deinosuchus riograndensis, who is distantly related to the modern alligator.

This skull is a part of the New Jersey State Museum’s newest exhibit dedicated to the history of crocodiles in the state, titled “Jersey Crocs Rule!” Although the fossil is a cast, it gives visitors a good idea of some of the scarier prehistoric creatures that called New Jersey home.

Whether you’re escaping a rainy day or looking to entertain the kids without a screen, the New Jersey State Museum is a great place to learn more about the history of the state.

The museum focuses on four topics, natural history, fine arts, archaeology, and cultural history. There is also a planetarium with different programs and shows. “We have the full range,” says Margaret O’Reilly, the Executive Director, “Plus its free admission.”

She affectionately calls the museum “the Smithsonian of NJ.” When asked about her favorite exhibit she laughed, saying, “I couldn’t choose, it’d be like picking a favorite child.”

The museum was originally located in the state house and was created to house geological samples. Since then, the museum grew in size and variety before moving to its current location on State St.

Besides the crocodile exhibit, the museum also boasts a great collection of fine art from both famous artists, like Georgia O’Keefe, Andy Warhol and Roy Lichtenstein, and local artists from multiple eras.

Another exhibit features objects from different eras of New Jersey History, including colonial furniture, busts of prolific people and a commemorative silver cup given to the state after the hundredth anniversary of the battle of Yorktown.

In the cultural history vein, the museum has exhibits featuring Native American clothes, masks, and artifacts from local tribes. There is also an exhibit on state archaeology, including the geological history of the area.

Each area brings its own perspective to New Jersey State history. Exhibits also often include a puzzle or quiz for kids to solve as they look around.

The museum truly complements the city of Trenton and emphasizes the other tourist sites in the city. “We all enhance each other and what we do.” says Margaret O’Reilly.

People of all ages can enjoy what the State Museum has to offer and Margaret O’Reilly says that that is one of her favorite parts. “I love seeing people engaged with each other because of the art or the artifacts that they’re seeing. It starts dialogues that they wouldn’t have otherwise.”

Although admission is free, memberships are also available. The museum is supported by its own foundation since 1968. “We are so lucky to be supported by the New Jersey State Museum Foundation,” she said.

In the future, the museum is going to feature even more interesting exhibits including a showing of art made by artists in the Pinelands and a feature on the Apollo 11 moon landing.

For an overview of the history that makes New Jersey unique, visit the New Jersey State Museum. The multi-leveled display space houses beautiful art, interesting artifacts, and ancient fossils. People of all ages can enjoy the exhibits and learn a little about where they live in the process.

TCNJ Journalism major with an interest in the sciences and technology writing.