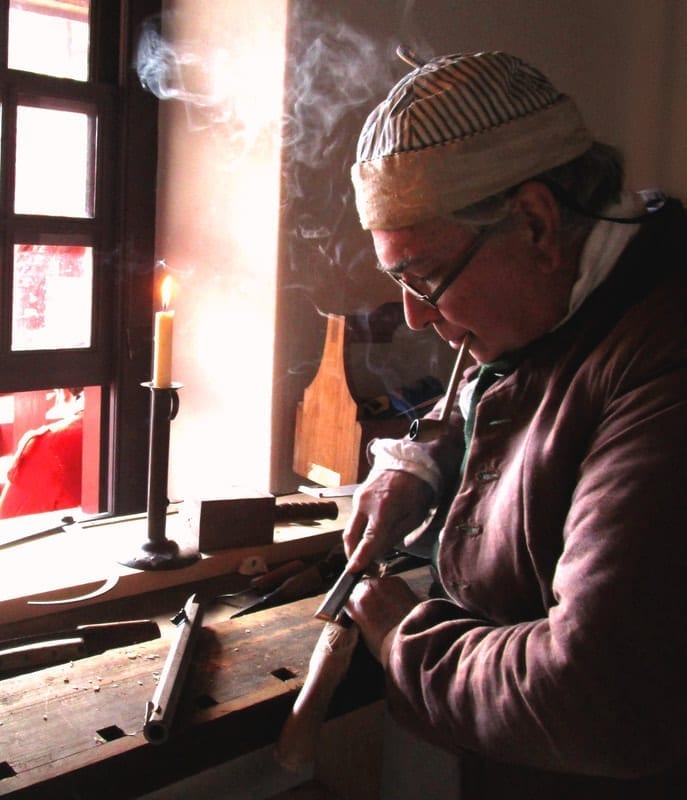 The Old Barracks Museum will be hosing Manufacturing a Revolution: Trenton in the Winter of 1778.

On Saturday, March 23 and Sunday, March 24, from 10 a.m. – 5 p.m., the Old Barracks Museum will break your winter cabin fever by reliving the winter of 1777-1778, when Washington’s troops were experiencing the harsh Winter at Valley Forge. The Old Barracks will host 18th century carpenters, tailors, seamstresses, shoemakers, hornsmiths, leather workers, hatters, gunsmiths, laundresses, soapmakers, clerks, and members of the local militia and Pulaski’s Legion.

Come see the scale at which production was happening in Trenton in 1778 in order to sustain the needs of the Continental Army. Old Barracks Historical Interpreters will offer introductions to the Winter of 1778 at 11 am, 1 pm, and 3 pm, and the artisans and tradesmen will be demonstrating all day, both days.

In the winter of 1777-1778, George Washington’s Army suffered through harsh winter with limited supplies at Valley Forge, PA. During that same winter, the residents of Trenton were almost overwhelmed with satisfying the Army’s manufacturing and supply demands while also trying to perform their obligations to serve in the militia.

This bit of history about New Jersey’s capital city was not well known until the publishing of “Crossroads of the Revolution: Trenton 1774-1783”, written by local historian, Larry Kidder. The book vividly portrays Trenton as a beehive of activity that winter. Gen. Casimir Pulaski had come to town making a great many demands for leather goods and supplies for all the cavalry units under his command. The Pennsylvania State Navy had taken refuge in town, with supply demands for weapons, clothing, shoes, boots, and more to be manufactured by the many artisans in the community.”

The Old Barracks is located at 102 Barrack Street. Parking is available in the lot next door.