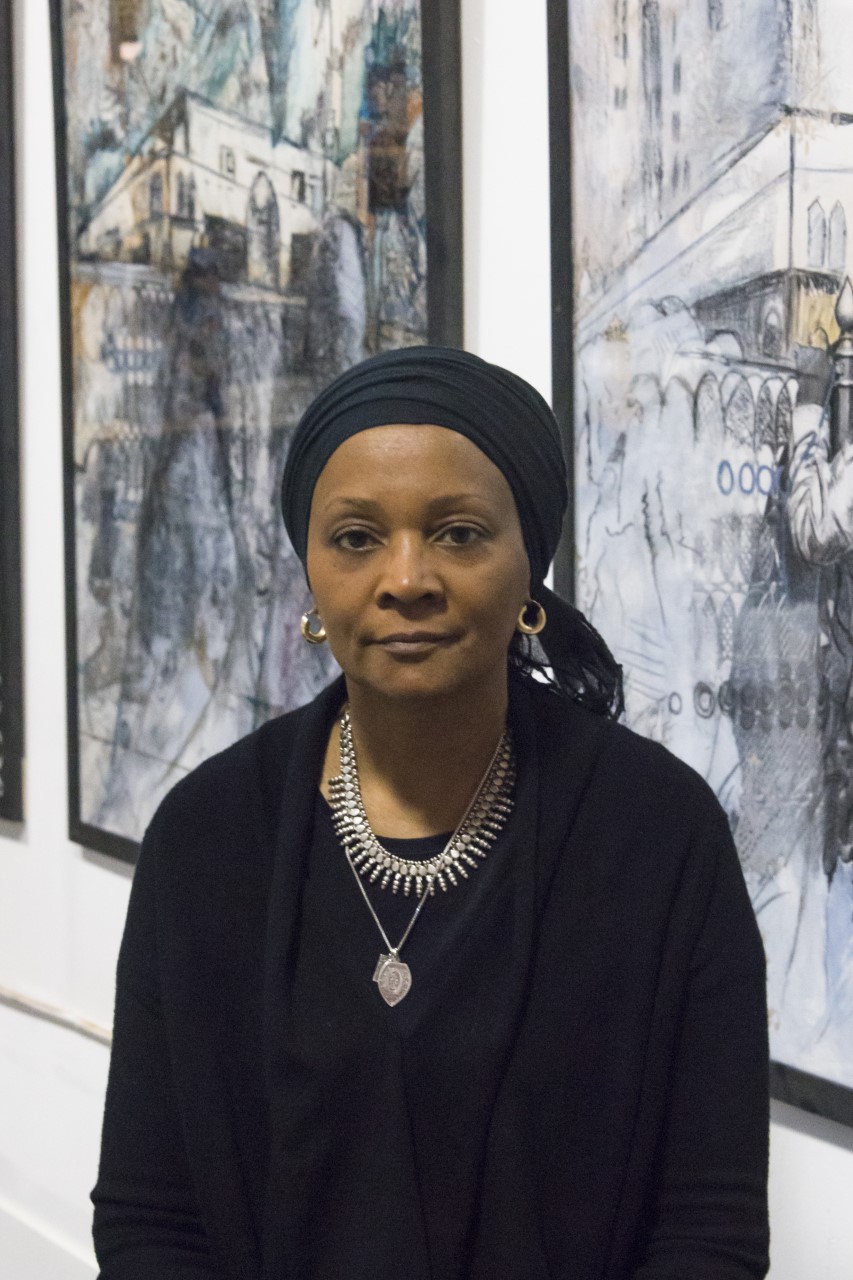 There is a calmness that teachers have as students enter the classroom looking to ask questions. For Trenton artist Khalilah Sabree, that calmness is ever-present as she spoke about her 20+ years of experience in the Trenton art world.

Over two decades ago, Sabree began a career in art as she pursued a master’s degree. In Lawrence Township, as a middle school art teacher, she worked part-time for three years receiving her Master of Arts from The University of The Arts in Philadelphia. Part of that program required her to have a studio to build a body of

work. Luckily for Sabree, an artist was leaving Artworks at the same time she was pursuing a studio space. After speaking with the artist, she moved into the same space she has occupied for the last 20 years. With that obstacle out of the way, she focused on the work.

Sabree decided to start by figuring out what exactly she would create. “If I’m gonna pursue this much work and brainpower on something, let me make this something relevant to me,” Sabree said. “And being an American Muslim. I’ve always struggled with the notion of images, not painting images, that whole dilemma.”

Sabree doesn’t focus on creating images can that be easily analyzed. Her body of work is abstract, blending shades, colors, and symbols onto a piece to create a feeling instead of a clear picture. “Some people need a more concrete image, where you can say oh, yeah, that’s a cow. Whereas others don’t need to see a cow to know that it is a cow,” Sabree said. The idea, in writing terms, is to create images that achieve a metaphor instead of a simile.

She would paint over 30 pieces alone in the transition area, finding her footing in a body of work about spiritual transition. Since then, her work has been closely tied to her religion as an American Muslim. She would create works around verses or chapters in the Koran, even basing a large body of her work around her Hajj, the spiritual pilgrim to Mecca all Muslims must take at least once in their lives. Like many artists, current events affect her. After 9/11, her art became black and white. “I couldn’t paint in color,” Sabree said, “I think what happens with me is that I internalize that event and then it comes later what my response is to it.”

Her response to the pandemic so far has been an artist block. She comes into her studio in Artworks, surrounded by 20 years worth of experience, and then reorganizes her paintings, reworks her unfinished projects, and waits for the next piece to come to her.

“I take one day at a time,” Sabree said. “Experiencing this pandemic has been very difficult. So right now, I’m trying to work through an artist block. You know, where imagery or connection just isn’t coming. So what I’ve been doing is just coming in here putzing around, reworking, just letting the work drive me and encouraged me.”

Through all of the pain and suffering of the last couple of years, Sabree still finds hope in tomorrow, and like a teacher to a student, tells the upcoming artists of Trenton to keep heads up and their brushes moving. “Keep your brush wet,” Sabree said, “doodle, write even if it doesn’t make sense. Just keep moving.”