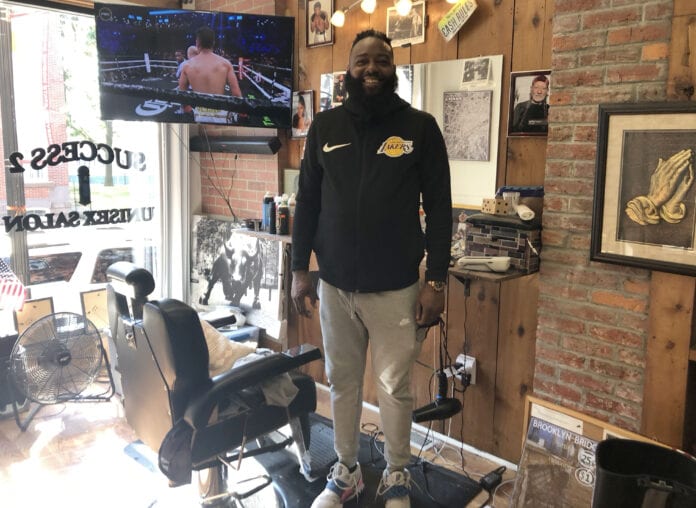 Only two days after its grand opening, Success Barber Shop & Salon was forced to shutdown due to the initial wave of the COVID-19 pandemic. However, after gathered efforts and support from the local community, owner Wayne Downing was able to reopen his shop and offer Trentonians the fresh haircuts he’s been anxiously waiting to give.

“When stores opened, we were here the next day,” said Downing, referring to Governor Murphy’s decision to allow barber shops and salons to open. Since then, Success Barber Shop & Salon has been thriving in their new environment.

Located on 110 W State Street, Success Barber Shop & Salon is the third location owner Downing has opened. His first shop was on Rutherford Ave. After this current space became available, Downing decided to relocate his second shop, which was on Pennington Ave, to this new building on W State Street. “I moved everybody from that location to this location once I finished the construction,” he said.

The construction of this new shop took approximately two months. Downing brought four other workers with him, two of which are beauticians.

Downing credits the name of his shop to an old friend, Daniel Day, popularly known as Dapper Dan, a top designer for the infamous American fashion company, Gucci.

“I worked for him since I was 14 years old,” said Downing.  “He always gave me knowledge, a lot of history and a lot of books to read.”

He continued, “The word ‘success’ and the meaning of it became the way I felt about my life. Once I got on the right track in the right role and completed my business, that’s the name that gave me my intuition.”

Not only has Downing used success as a term for personal inspiration, but he also emphasizes spreading success among the community he cuts hair for.

Downing has partnered with Volunteers of America to help provide haircuts for individuals struggling to return to society after facing hardships. He said, “I help anyone that’s coming home and is trying to get a job or reenter society.”

For Downing, a hair cut is more than just an alteration in appearance. He said, “Cutting hair is like being a counselor.”

He continued, “Once you get in the chair, they talk about their problems…you know, just regular life situations, and I try to give them the best advice I can give them.”

Whether they can afford it or not, Downing never turns down a customer in need. “A lot of people, with this COVID thing, are going through bad situations. That’s why I’m here. I’m here for them,” he said.

With this new barber shop and salon, Downing is hoping to not only bring new hairdos to Trenton, but a sense of togetherness and community. He said, “There’s a lot going on in the world right now. Anytime you can help someone, you help them.”