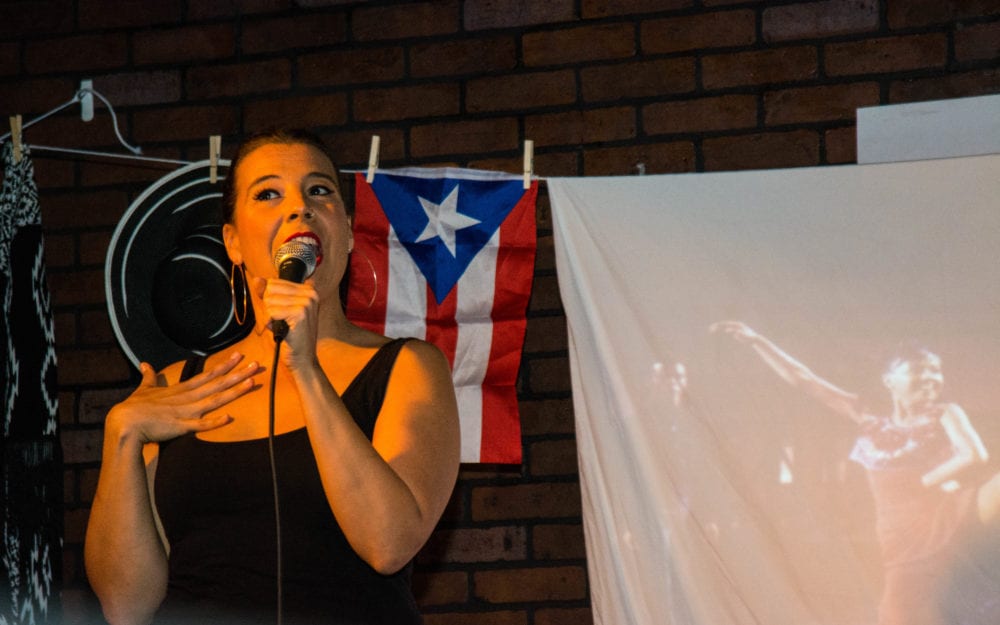 Passage Theatre Company, Trenton’s professional theatre company, will present their first solo flight of the 2019-2020 season, Sorta Rican! Performed and created by Miss Angelina, and directed by Laura Grey, the show will run for three performances only on November 15th, 16th and 17th, at the Mill Hill Playhouse.

Miss Angelina is not your typical Latina. She’s half Puerto Rican, half Italian, and totally Americanized. And her Spanish? No bueno. Sorta Rican is her journey of coming to terms with her identity as a Latina. Weaving Hip Hop lyrics, Salsa steps, and Caribbean beats throughout her tale, she learns a ton about Latino culture, but even more about herself.

An actress and recording artist based out of San Juan, Puerto Rico, Miss Angelina received her degree in Music Theatre from Northwestern University, has two albums on iTunes & Spotify, and has performed her music on VH1 headlining several events including Miami Music Week. She executive produced and hosted ¡GLOBAILE! – a music web series co-starring DJ Tony Touch – that was featured on the network television program American Latino and streamed online with John Leguizamo’s NGL Media — and she wrote and produced Sorta Rican , a play based on her real life experience, that has been touring nationwide since September 2015 at notable venues such as the Los Angeles Women’s Theater Festival, The One Festival, The iO Theater, Broadway Comedy Club and Hard Rock Cafe.

Passage’s Artistic Director, Ryanne Domingues, says, “I could not be more excited to bring Miss Angelina to Trenton! Her energy, humor, and kindness are just what we’ll need to heat up a chilly November. SORTA RICAN is a hilarious show packed with music, dance, and a heart-warming message that I think anyone in our audience will be able to relate to. I’m looking forward to some fun nights at the Playhouse!”

Performances of Sorta Rican are Friday and Saturday at 7:30 p.m. and Sunday at 3 p.m. for one weekend only, November 15-17. Tickets are $13 – $27. Student, group and senior discounts available. To purchase tickets, call (609) 392-0766, or visit www.passagetheatre.org. The Mill Hill Playhouse is located at 205 E. Front Street, at the corner of Montgomery Street in Trenton, NJ. On-street parking will be available.