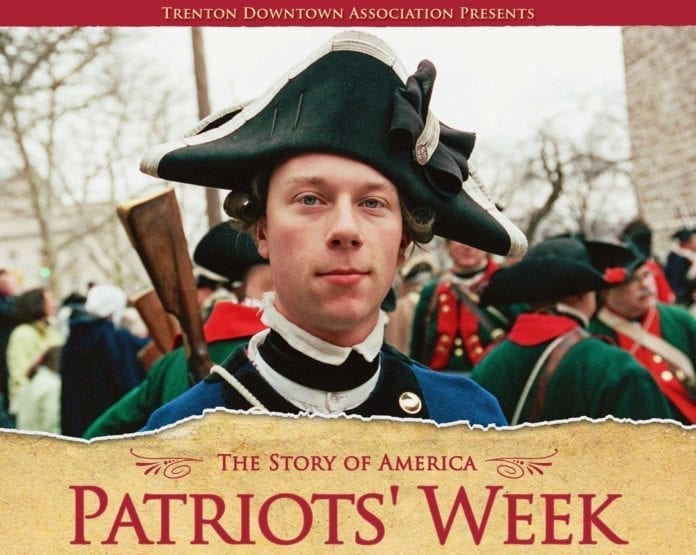 Downtown Trenton is traveling back in time, 242 years to be exact, to the year 1776. This was the year the tides of the American Revolution turned in America’s favor as General George Washington and his Continental Army launched a surprise attack on the British Army’s Hessian troops headquartered in Trenton on December 26th, 1776.

To celebrate this monumental event and Trenton’s significant role in the fight for American independence, Downtown Trenton will be celebrating Patriots Week, operated by the Trenton Downtown Association whom describes this week long series of events in the following manner:

“In Trenton, New Jersey’s Capital City provides the unique opportunity for residents and tourists to experience the events that shaped our nation during Patriots Week. The Trenton Downtown Association works closely with neighboring sites in the area to bring the most comprehensive historical experience to life for those of all ages and backgrounds. Through the immersive experience that is Patriots Week, the TDA commemorates and recognizes Trenton’s unique and pivotal role in the American Revolution. A role that has shaped some of the very streets and buildings that can still be seen standing today as they were in 1776.

Patriots Week is held annually from December 26 – December 31 during the week between Christmas and New Year’s and attracts thousands of visitors to the city to enjoy historical tours, a pub crawl, colonial ball, lectures, films, art, music, battlefield re-enactments, and living history events. This year use your holiday break for a fun & history-filled family staycation!

With over 70 events taking place during the six-day period it’s easy for families and history aficionados to spend a few days in Central New Jersey this December.”

For more information and a schedule of events visit http://www.destinationtrenton.com/events/patriots-week/.