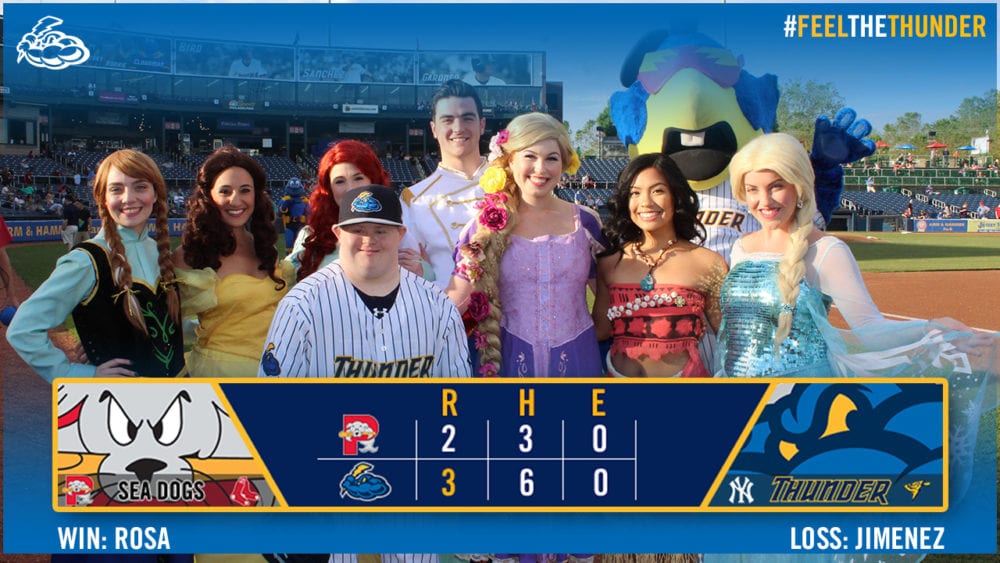 Trevor Stephan and Adonis Rosa combined to hold the Portland Sea Dogs to three hits in a 3-2 Thunder win on Wednesday night at ARM & HAMMER Park.

The win, along with a Binghamton Rumble Ponies loss, put the Thunder (26-17) in a first-place tie in the Eastern Division standings.

Rebuilding his pitch count in just his second start back from a stint on the injured list, Stephan pitched three and two-third innings for the Thunder, striking out four while walking three and allowing one run. Rosa (2-1) pitched the remainder of the game, holding the Sea Dogs (13-30) to one additional run over five and one-third innings.

Zack Zehner laced an RBI-single to left field off Portland starter Dedgar Jimenez (1-3) in the bottom of the third for a 1-0 Thunder lead. The Sea Dogs tied the score in the fourth, as a Cody Asche walk issued by Stephan came around to score on a Tate Matheny single off Rosa, who had entered in relief with two out.

The Thunder immediately retook the lead in the bottom of the fourth, as Kellin Deglan singled and scored on an RBI-triple to right field by Rashad Crawford.

A Matt Lipka sacrifice fly added an insurance run in the bottom of the eighth and provided cushion for the ninth, when Matheny delivered another RBI-single but was then left stranded on second.Your Thunder conclude their homestand on Thursday morning at 10:30 a.m. against the Sea Dogs. RHP Rony Garcia(1-3, 4.22) will start for the Thunder, and LHP Kyle Hart (3-5, 2.77) will go for Portland. Tickets for the Education Day game are available by phone at 609-394-3300 or online at TrentonThunder.com.