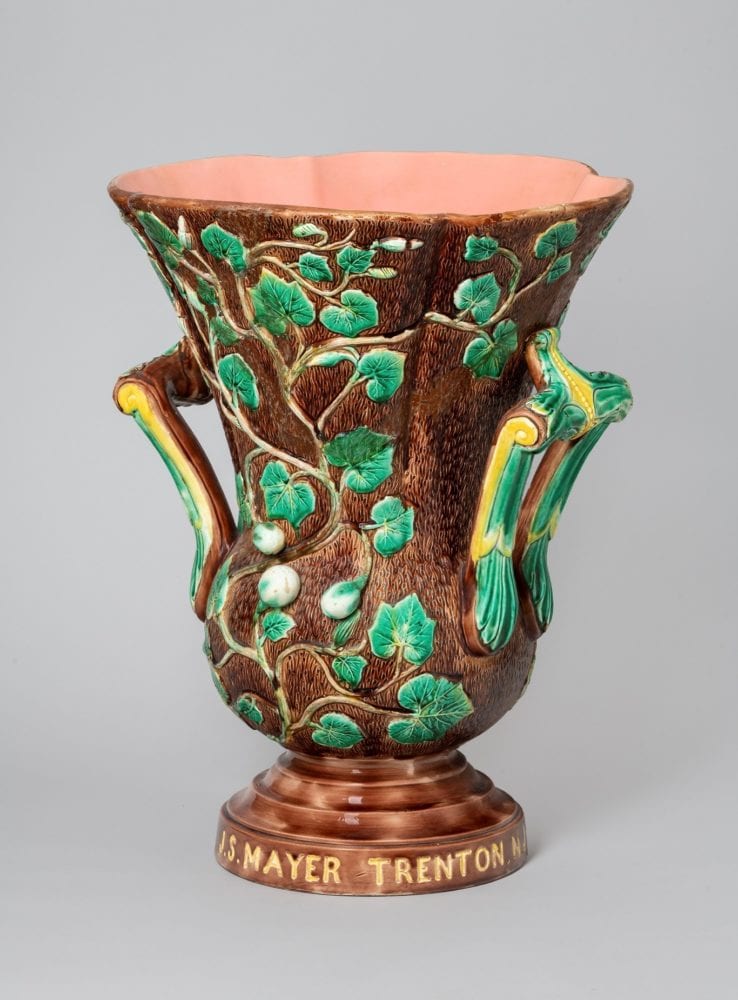 The Potteries of Trenton Society has partnered with the New Jersey State Museum to present its annual lecture on Trenton’s Victorian Majolica Makers. Dr. Laura Microulis, Research Curator at the Bard Graduate Center in New York City, will discuss Trenton’s Majolica Mania at the meeting to be held Saturday, April 4, beginning at 1:30 p.m. in the Auditorium of the New Jersey State Museum at 205 West State Street.

The lecture is free and open to the public. Light refreshments will be served. Free parking is available in the lot behind the State Archives next to the Auditorium.

Colorful and wildly imaginative, the lead‐glazed earthenware known as majolica was one of the most significant innovations in nineteenth‐century ceramics. Largely inspired by Renaissance maiolica, majolica proved to be the quintessential modern medium—a material that could be mass‐produced into myriad shapes and styles for both functional and ornamental purposes.

Introduced in 1851 by the renowned English firm, Minton & Co., and subsequently made by dozens of other Staffordshire factories, the eccentric designs, boldly molded forms, and richly colored glazes of majolica captured the attention of consumers on both sides of the Atlantic—the potteries of Trenton, New Jersey, responded accordingly.

Microulis will explore Trenton’s role in the mania for majolica from the American pottery displays at the Centennial Exhibition in Philadelphia in 1876 to the financial demise of the last majolica factory in Trenton in 1897. She will demonstrate the importance of immigrant craftsmen, as well as how new foods and fashions for the table, Aesthetic movement principles, and the widespread interest in botany impacted the design and decoration of the ware.

Microulis, a material culture scholar with a specialization in nineteenth‐century decorative arts and design, has been part of the curatorial team behind the forthcoming exhibition and publication, Majolica Mania: Transatlantic Pottery in England and the United States, 1850–1915, which opens at the Walters Art Museum in Baltimore on April 27, 2020 and then travels to the Bard Graduate Center in New York from September 25, 2020 through January 3, 2021.

Majolica Mania is the first major public display of this material in nearly four decades. Featuring over 350 objects, from domestic vessels to monumental pieces shown at the World’s Fairs, the exhibition and accompanying three‐volume catalog consider the principal designers and manufacturers of the ware, its broad dissemination, and ultimate decline within the social and cultural context of the Victorian era.

The Potteries of Trenton Society is a non‐profit organization dedicated to promoting the study and appreciation of Trenton’s ceramic industry by gathering and preserving information related to the industry, sponsoring research projects, seminars and conferences, and promoting industry‐related heritage tourism activities. Membership is open to all and information about joining will be available at this event.

The New Jersey State Museum is a center of cultural, educational, and scientific engagement, and inspires innovation and lifelong learning through collections, research, exhibitions and programs in
science, history and art.

For further information about this event, the Potteries of Trenton Society and the New Jersey State Museum, please see www.potteriesoftrentonsociety.org or www.state.nj.us/state/museum