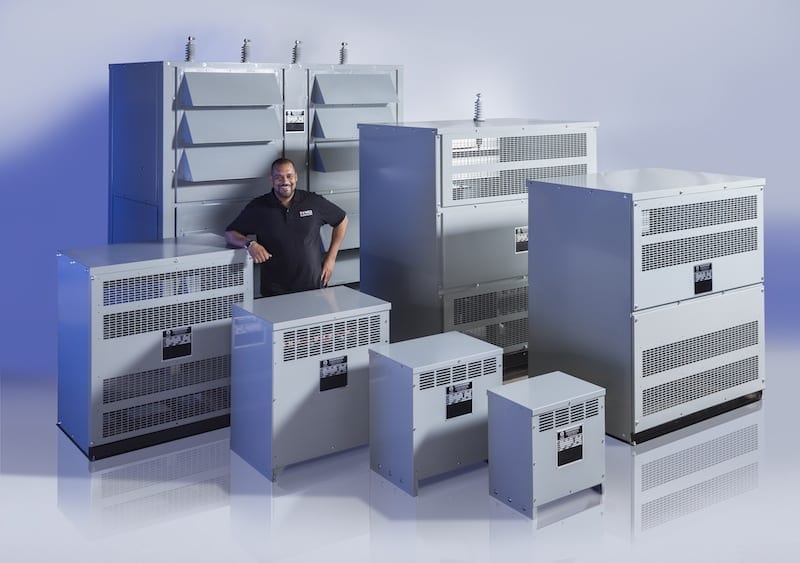 Power Magnetics, Inc., located at 377 Reservoir Street in Trenton, is the leader in design and manufacturing of the industry’s highest performance and most reliable premium custom air cooled transformers, AC reactors and DC inductors.

Carl T. Bannwart, the founder of Power Magnetics was a brilliant and charismatic individual who also had a strong, creative streak… In 1968, Carl T., Don Kupper, his engineer, and George McCauley, his factory manager, founded Power Magnetics over drinks at his dining room table.

During that fall the company was incorporated and the factory was set up in rented space over on East State Street in part of the old Thropp Building. The first transformer was finished during Christmas break, and delivered to a New Jersey customer, CML Communications in North Jersey. Carl’s wife was the bookkeeper and generally helped out in the office.

During the next couple of years, life at Power Magnetics was very busy with the usual business challenges, complicated with Carl T.’s poor health. The chaos culminated in his death from a heart attack on May 15, 1975.

Carl A. and his brother Paul elected to buy the building in an economic development zone at Reservoir and Marion in 1983. They fixed the place up and moved in during the summer of 1984.

Over the next decade and a half, they started making CLR’s, current-limiting reactors, for the precipitator industry as well as load bank reactors and medium voltage trap reactors. The company also established supply contracts with several large American machine tool manufacturers.

In engineering, they started using Paul Goethe’s Optimized Program Services software and AutoCAD design. The development of furnace transformers for the American heat treating business added to the product lines. The phase changer business for commercial and industrial infrastructure for regional developers became a small business all on its own.

Nonetheless, the basic question still remained: what major product line will take the company into the future? Carl knew that their best competitors had succeeded by finding a niche and he thought by copying one of their “niches,” he could find success, but this hadn’t worked. They had always been good at making reactors, but felt that the construction was problematic and too labor intensive.

Then it came in a flash. Jack Agnew, in engineering, and Carl were discussing the merits of a particular manufacturing process. Jack commented on a methodology they both knew and Carl realized immediately that this was the way they needed to make reactors. It took a few years to get the process perfected because of the capital required and the time to put pieces of the engineering puzzle together.

Understanding the power of the concept is related to the expression “there are very few bargains in life!” How many of us have been wowed by a price, only to be disappointed later by quality or service? Similar rules apply in engineering; if you want more or better features: you generally have to pay for them.

With the company’s new construction, its reactors run cooler, are quieter in operation, have a longer operating life and are less costly to manufacture. In this case, Power Magnetics offers a true bargain and its reactors have become the industry standard.

Today it feels like the company is just getting warmed up. New business is being won from large, international customers based on the Innovation, Engineering and Endurance of the engineering that provides them unparalleled performance and reliability, and it seems there is more over the near horizon. The company has plans for a small addition to the building and plans to double its business capacity and employment in the next few years, and then with any luck double it again. The Trenton community and the company’s employees have been there for Power Magnetics through thick and thin, and it will be there for them. Its work is not done.

PMI enjoys an excellent reputation in the industry for Innovation, Engineering and Endurance that is widely recognized as being among the best of any manufacturer. The company continues to win business from customers who are increasingly unable to tolerate field failures from lesser products by other manufacturers.

As one VP of an aerospace firm told his Purchasing Manager recently, “Buy the reactors from Power Magnetics. Theirs are nearly impossible to destroy. They last forever!”