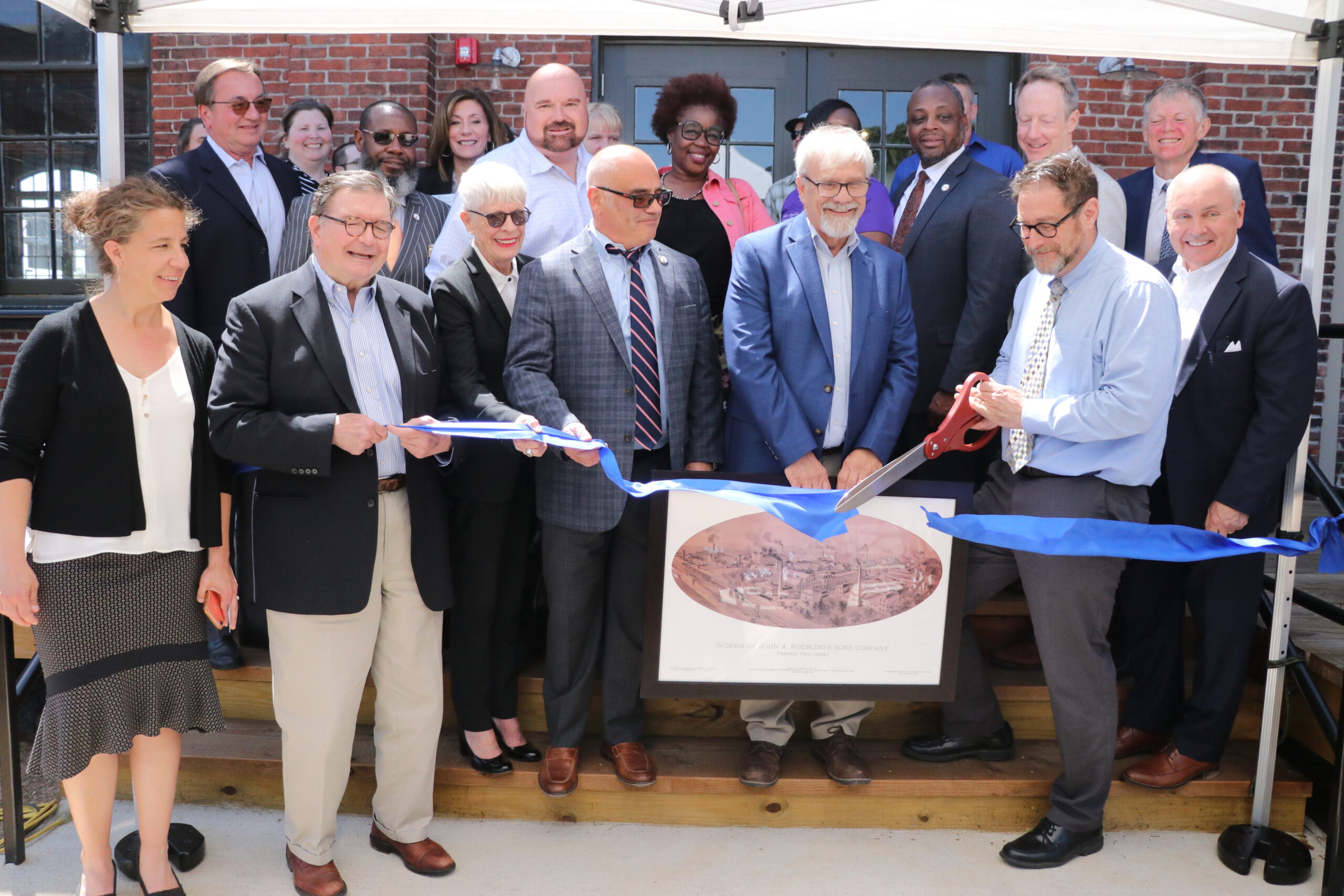 Princeton Hydro and the City of Trenton hosted a ribbon-cutting ceremony to celebrate the opening of Princeton Hydro’s new headquarters office in the historic Roebling Carpentry Shop (Building 110), a significant economic development milestone for the city of Trenton.

“The city of Trenton’s location has been strategic throughout the history of the United States, from a major turning point in the American Revolution to a major manufacturing center of the American Industrial Revolution to the development of major bridges throughout the country. It’s the perfect place to inspire our scientists, engineers, and landscape architects to shape the world in the 21st Century,” said Geoffrey Goll, President of Princeton Hydro.

The state-of-the-art office space on the top floor of the building (approximately 9,000 SF) has been transformed while still maintaining the character and features of the original brick and heavy timber building. The project, constructed by Trenton-based Hx2 Development and designed by Trenton-based Architecture and Planning firm, Clarke Caton Hintz, has received enormous support and encouragement from the City of Trenton and Greater Trenton, the local organization dedicated to advancing revitalization efforts in the City.

“We are thrilled to welcome Princeton Hydro to Trenton and the opportunities their relocation means for current and future Trentonians. Transforming a former industrial building into modern office space for Princeton Hydro’s new headquarters mirrors the transformation in how and where companies choose to work. Access to multiple transportation options and other amenities found only in urban areas will aid in attracting and retaining quality employees and sustainable growth of Princeton Hydro’s business,” said George Sowa, CEO of Greater Trenton. “We look forward to having them not only in the community, but also of, the Trenton community.”

The new tenant, Princeton Hydro, is a water resources engineering and natural resources management small business consulting firm committed to improving our ecosystems, quality of life, and communities for the better.

“The move represents a wonderful partnership between a professional firm with big ideas and commitments, the hard work of City staff, and Greater Trenton’s assistance with marketing and logistics. This is a win-win for all involved and we are excited to welcome Princeton Hydro to Trenton,” Sowa added.

The firm was formed in 1998 to provide integrated ecological and engineering consulting services and offer expertise in natural resource management, water resources engineering, geotechnical design & investigation, and regulatory compliance throughout the Northeast.

“The City of Trenton is extremely excited that Princeton Hydro has chosen the Capital City as its new home and we look forward to seeing the historic Roebling Wireworks Carpentry Shop revitalized and rejuvenated into the bustling center of innovation and craft it once was,” said Trenton Mayor W. Reed Gusciora. “It’s our hope that other businesses will follow in the footsteps of Princeton Hydro and utilize everything Trenton has to offer, including the City’s cultural amenities, tech savvy workforce, and proximity to feeder universities.”

This move by Princeton Hydro will result in the relocation of 30+ jobs to Trenton. It will bring to life a building that has been vacant for more than 25 years and adapt its use from industrial to transit-oriented, modern office space. Director of Housing and Economic Development, C. Andre Daniels, said Princeton Hydro would create a domino effect.

“We sent out and our request for proposal for Roebling block two, section two, 12 acres, seven buildings. Just some of the design, some of the ideas and visions for that. are nothing short of phenomenal. Really, really captivating Trenton as the capital city that she deserves to be,” Director Daniels said.

The redevelopment of Building 110 is part of the more extensive revitalization of Roebling Center, which includes five historic industrial buildings on Block 3 of the John A. Roebling’s Sons Company. Phase 1, completed in 2018, had the opening of Roebling Lofts, a unique 138-unit loft apartment building located in Building 101 of the Roebling Complex

Director Daniels said that he hopes Trenton will become a destination. “Oftentimes you don’t think about Trenton as a destination say for the fact that it is the capital city and workers come here but we’re grooming her out. We were building her…really it just comes from the trust of having good ribbon cuttings like today and having strong businesses come into your community, like Princeton hydro,” Director Daniels said.

Part of the reason that drew Princeton Hydro to the Roebling lot was its rich history. During the ceremony, Clifford Zink, a historian, explained the history behind the iconic .

“So when Roebling operated here starting in 1848. They built up a first with a few jobs and eventually they had about 3000 workers here. And they made products that went all over the world. And the whole factory had all the various skills. So they had electricians on staff plumbers, carpenters, all different trades machinists, the carpenters worked inside here,” Zink said. “So this two buildings represent a great transition and the history of building technology but also in the history of Trenton and Roebling here.”

Goll explained that bringing engineers into a building with so much history is exciting for him and his workers.

You know, there’s some of the greatest bridges in the world were constructed in this area, the cables for them were built here. It’s really exciting,” Goll said. “Just as an engineer, I mean to what a place to geek out. Some of the greatest engineers in America were here. Where we’re working is awesome.”