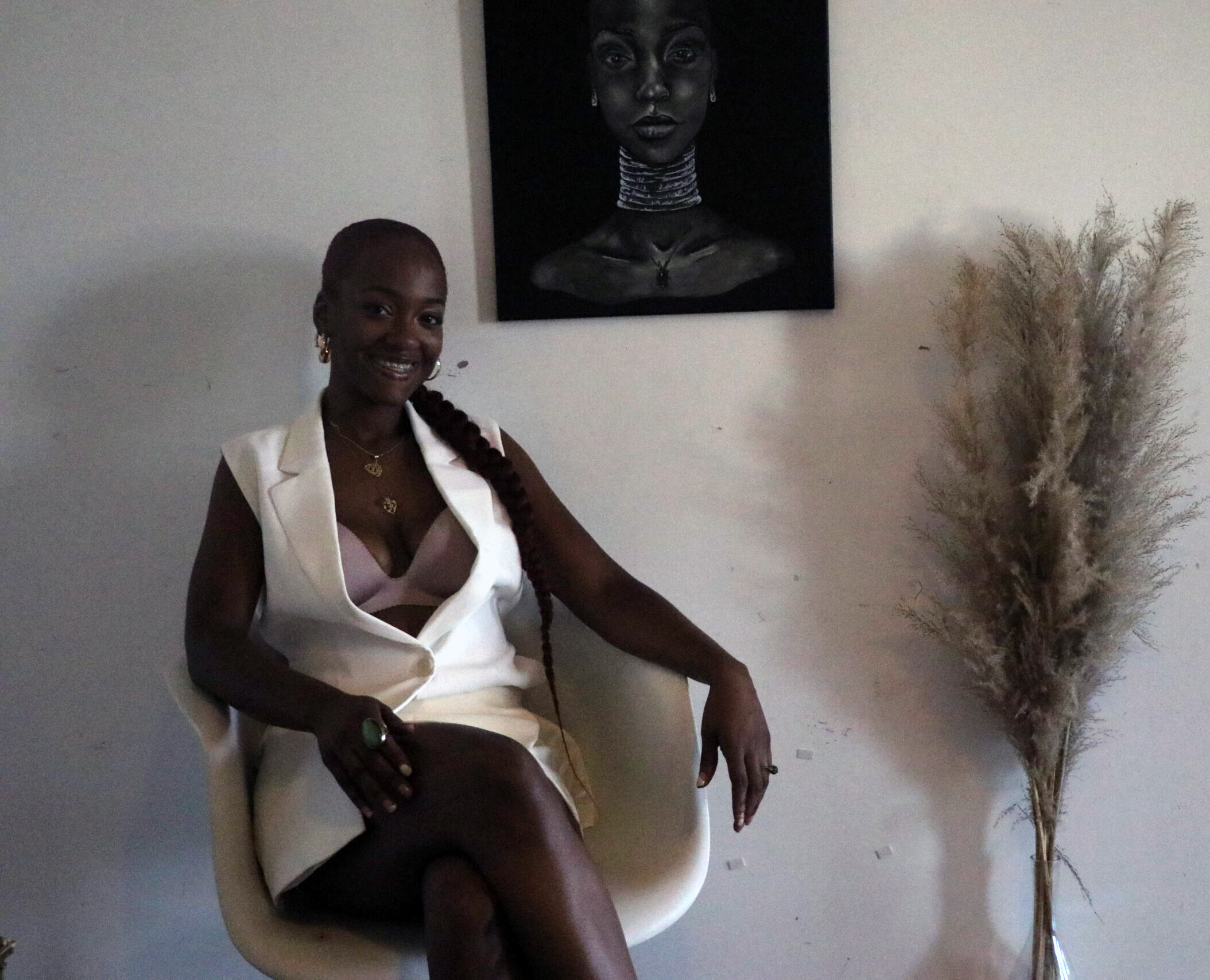 It was a three-story walk up to a small gallery on S Clinton Ave in Trenton. There were deviled eggs and sandwiches for guests to sample, and across the walls were examples of how someone can make a name for themselves in Trenton’s art scene.

Raven’s Room: The Art Exhibit was Raven George’s first solo outing, and she made it her own. The idea, however, was a spontaneous one.

“I decided to do it spontaneously around January because I was recovering from COVID. And there was just a lot of fluctuations and transitions that were going on in my life,” George said.

She continued, “I’m like, you know what? I’m going to do a show. I challenged myself to see where this will take me because I’m beginning to take my art a little more seriously.”

Her artistic spirit began when she was very young. Her mother, Tasha Crawford, explained that she had been an artist since she was a child.

“She’s been doing this since she was like, I say, two years old,” Crawford explained that she has encouraged George throughout her artistic career. “I think it’s important because when you are behind them on something they’re passionate about, it makes them go harder.” George did. In the beginning, she found peace in keeping her art to herself.

“So for a long time, I’m drawing in my fifth-grade notebooks throughout school and getting in trouble for it, but I’m hiding, I’m concealing it,” George said.

She didn’t want the world to see what she was creating.

“These are my most vulnerable and precious inner thoughts, and no one’s going to appreciate it how I appreciate it,” George said. That is until now. “l now that I feel like I have a clearer understanding of who I am, what my purpose is.”

This was a one-time showing that was entirely her own. The work on display on Saturday night came from a journey of self-love and expression.

“The journey of self-love, there’s a lot of crying… A lot of writing, because I tend to write in my journal to understand my thoughts…I didn’t know who I was. I just knew I was based off of other people’s truths. ”

Then there was a moment of clarity, a moment of spiritual recognition, that led her down the path of becoming a Muslim.

“I had a spiritual moment in the bathtub, my incense, my candles, my crystals, and I wasn’t feeling good at the time,” George said. “I was asking (Allah) to allow me to surrender. After I got out of the tub, I knew right then that I was going to become Muslim… It felt really good and has helped me a lot with tapping into my artistry.”

Over the last six months, George took inspiration from that journey to create Raven’s Room. She drew inspiration from her actual living space. Her art resembles different emotions and takes you on a story of tears, laughter, prayer, love, loss, and dances in the rain. This show was an invitation into the deepest parts of who she is.

“My exhibition is centered around youth, healing, playfulness. Just connecting and communicating with yourself, then feeling comfortable to come back home to yourself,” George said.

This art exhibit was free entry and entails a collection of paintings, drawings, and multimedia collages. Trenton residents and artists attended it well. April Cooper, Trenton Resident, and local artist attended the night, explaining that artists across Trenton support one another.

“Who else is going to support us…I would love more people to do it. But right now, she needs me to be her biggest cheerleader, and I shall be here,” Cooper said.

This was George’s first Solo Art exhibition since graduating from Montclair State University. Although Raven has been creating since she was a little girl, she’s beginning to make art that aligns with her truth. However, this was a once-only event, and she does not know when the next one will be.