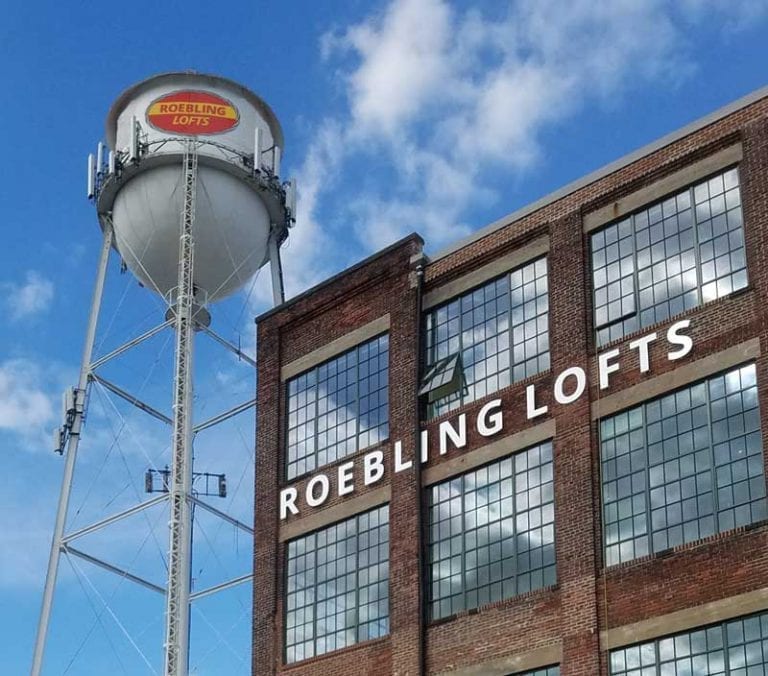 On October 5th, as part of its ongoing First Friday series of art openings, Roebling Gallery exhibited Roebling and Trenton-related drawings, posters and other ephemera from the collection of noted historian Clifford Zink last at Roebling Lofts, 71 Clark Street.

The opening coincided with the 100th anniversary of Charles Roebling’s death. Charles was president of the John A. Roebling’s Sons Company for four decades and the innovative Roebling Lofts building he erected in 1917 was one of his last projects. Zink, author of the Roebling Legacy, gave a talk about Charles co-sponsored by the Trenton Historical Society .

“Charles Roebling was continuously innovating and building”, said Zink. “When he joined the company at age 21, J.A.R.’s Sons employed about 100 men and boys. When he died on October 5, 1918, it employed about 8,000. It’s a unique opportunity to display some items I’ve collected and to speak on the anniversary of Charles’ death in one of his finest buildings now restored and again occupied ”

In addition to the exhibit and talk, attendees visited a number of public and private spaces in the building, which is now Roebling Lofts.

“Roebling history has always been an important consideration in both the design and marketing of the Lofts,” said David Henderson, a Principal with HHG, developer of Roebling Lofts, and a key sponsor of Roebling Gallery. “Charles set out to design an ultra-modern factory building in 1917, replete with massive windows, high ceilings, and fire-resistant design. We’ve preserved this legacy in every loft apartment, and are excited to share it with our residents.”

The exhibit will remain on display throughout the month of October. Viewing hours coincide with leasing-office-hours, M-F, 9 a.m. to 5 a.m., and Saturdays from 10 a.m. to 2 p.m.

“Roebling Lofts is an exceptionally fine historic renovation, preserving and celebrating an important aspect of Trenton’s history,” said Damon Tvaryanas, President of the Trenton Historic Society. “Our membership is excited to attend this event, celebrating Charles’ critical role in the growth of our city, both past and future.”

Roebling Lofts is Trenton’s greenest loft community. The 138 loft units provide exceptional comfort, finishes, and sustainability, converted from an historic, 1917 factory of the John A. Roebling Sons Company that closed in the 1970s. The building was completely renovated during its conversion to a multi-family rental building completed in November, 2017. Rents start at $1,399/month.

If you would like more information about this Roebling Gallery or Roebling Lofts, please call Michael Goldstein at (609) 638-3250 or email michael@hhgdev.com.