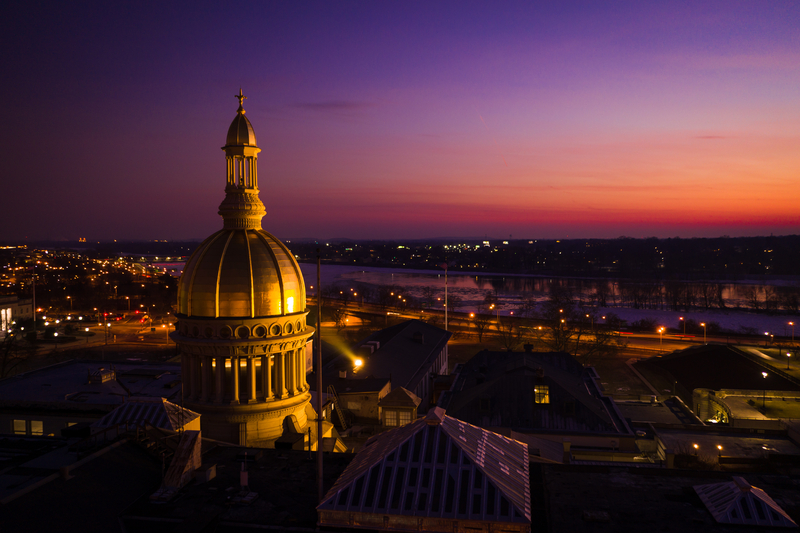 Born and raised in North Trenton, Samuel (Sam) J. Plumeri, Jr. dreamed about becoming a crimefighter from an early age. “I always wanted to be in law enforcement for as long as I could remember,” said Plumeri. “Now whether my parents liked it…I don’t know. My father would have preferred me to be a doctor, although, I was not the best student in the world.”

One thing is for sure: Sam Plumeri, Jr. was destined to pursue the path that he did. Attending Rider University at night while working undercover on the streets of Trenton, Plumeri noted “back then, the government had what was called the Law Enforcement Assistance Program (LEAP) which many of us took advantage of.” In fact, Plumeri’s classmate was Ernie Williams, who would later become Trenton’s first African-American police chief. “At that time my hair was much longer,” Plumeri chuckled. “I looked like a hippie back then.”

“We had professors that understood and appreciated those of us looking to improve ourselves through education,” said Plumeri. “They offered a law enforcement program…it was probably the best thing that I ever did and I’m still grateful for that opportunity.”

Plumeri began his career in law enforcement as a beat cop with the Trenton Police Division in 1970. He was assigned to the first precinct on Chancery Lane, a former freeze market house which was converted into a police building in 1888, and served as headquarters for the department until 1972. He then moved on to a radio car working the Trenton Downtown area including areas surrounding the Battle Monument and Perry Street, where he also patrolled frequently in the 70s.

Growing up on Princeton Avenue (now Martin Luther King Blvd) near George Street in Trenton, he lived with his two brothers Joseph J. Plumeri, II and Paul Plumeri, in a building that his father Samuel J. Plumeri Sr. built. The structure housed his father’s insurance company in the basement, the North Trenton Library on the second floor, and the family’s apartment on the third floor.

Plumeri’s dad, who founded Trenton Thunder in 1994, was a man with tremendous passion for the City of Trenton; which no doubt rubbed off on the Plumeri household. “Growing up in Trenton was terrific,” said Plumeri, who expressed great love and admiration for his dad. “I often tell my children how wonderful it was to grow up in the neighborhood of North Trenton, which was racially diverse at that time.” All three boys lived with their dad and mom, Josephine Plumeri, before eventually going off to school.

With the establishment of a Specialty Service Unit; which entailed undercover work focused on organized crime, narcotics and vice-related crimes; Plumeri spent the next 10 years of his career providing deep undercover work in Trenton. It wasn’t until the early 1980s when Plumeri shifted from undercover work to handling major crimes in the Criminal Investigation Unit. In 1990, he was recruited to work as an undersheriff in the Mercer County Sheriff’s Department.

During Plumeri’s exceptional career, he helped to remove millions of dollars of illegal narcotics from the streets and shut down high-level drug distributors. His legendary journey as a crime fighter, his many leadership roles, and his Trentonian love for the city certainly underpins his amazing legacy. His talent as an undercover agent was soon recognized and he was assigned Chief of Intelligence to the Trenton-Mercer Organized Crime Strike Force.

Appointed Mercer County Undersheriff, Plumeri oversaw all training, special operations and special investigations. In 1989, he was promoted to First Undersheriff, a title that he held until May 1990, when Governor James J. Florio appointed him County Sheriff.

In 1990, Plumeri was elected Mercer County Sheriff and immediately instituted many public safety programs. Some of these initiatives included his national award-winning “Blue Light Program,” aimed at protecting senior citizens, development and establishment of the county’s first K9 Bomb Detection Unit, and creating county-wide emergency response teams. He was re-elected Sheriff by overwhelming margins in 1993, 1996, and 1999. Following his successful work in Mercer County as Sheriff, he was asked to help lead the Port Authority Police in April 2002 as the agency recovered from 9/11.

Following the 9/11 Terror Attacks, Plumeri joined the Port Authority of NY & NJ, serving as Superintendent of Police and Director of Public Safety. He faced the immediate challenge of providing safety and security for tens of millions of people who used the Port Authority’s vast network of transportation facilities in a post-9/11 world.

In his current capacity as Chairman of the New Jersey State Parole Board, Plumeri oversees an agency that serves as the state’s lead reentry organization working to ensure that offenders return to society as law-abiding citizens. Plumeri is also charged with reducing the state’s recidivism rate while working to promote public safety throughout New Jersey’s communities. In addition, as Commissioner for the New Jersey Police Training Commission, Plumeri oversees the development and certification of basic training courses for state, county, and local members of law enforcement.

Plumeri has also served as a guiding force for Capital Health System for 16 years, helping to lead the health care system as a member of its Board of Directors from 2003 to 2018. In 2015, he was appointed Chairman, Board of Trustees— a role which he still holds. Last month, Capital Health and St. Francis Medical Center, a member of Trinity Health, announced a non-binding Letter of Intent (LOI), whereby St. Francis Medical Center will become a part of Capital Health. This represents the first step in evaluating and designing a framework that will enhance health care services and create a new model of care for residents of Trenton and the surrounding area.

Both Capital Health and St. Francis Medical Center are longtime founding board member organizations of Greater Trenton. “The health care industry is always evolving to advance medicine and improve delivery of care to the communities we serve,” said Plumeri. “The changes we’re seeing here in Mercer County are a reflection of what’s going on nationally, but our neighbors in Trenton and nearby communities can rest assure that we will continue to keep their interests at the center of all we do.”

“I’m always optimistic about Trenton,” Plumeri added. “The city has so much to offer and it’s culturally diverse… I hope that at some point, everyone comes together and recognizes just how unique we are; our history is invaluable. That’s why we’re vested in this initiative with Greater Trenton to do everything we can to help the city.”

Plumeri lives in Hamilton Township, New Jersey with his wife Barbara. He is the proud father of two grown children and has two grandchildren.