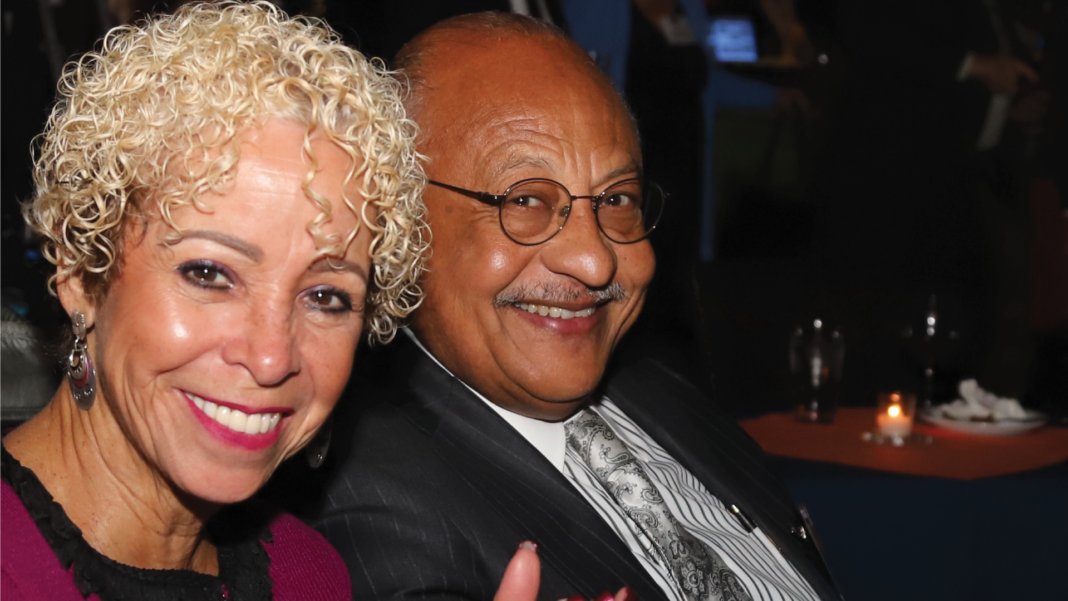 “This is the big bang theory where educators, retailers, developers are all in the same room, drinking and eating, and I can’t express the gratitude with the interest that is taking place in the city of Trenton,” Mayor Reed Gusciora commented during is his speech.

“Tonight is particularly special because we are emerging from last year’s event, which was virtual, to honor live and in-person with food and drinks an extraordinary couple in Drs. George and Pamela Pruitt,” said Brenda Ross-Dulan, the MC of the evening and Founder and Managing Principal of The Ross Dulan Group.

Dr. Pamela Pruitt, who serves as Executive Director of the Center for Diversity and Inclusion at Rider University, leads essential work to support underrepresented, marginalized, and under-resourced students and foster a better multicultural understanding and appreciation of a diverse student population.

She became Vice President of Morris Broadcasting and WIMG 1300 after escaping from the Twin Towns of the 9/11 terrorist attacks. “With that move… I was able to do just that. I was able to embrace and connect to the city of Trenton in my own way,” Dr. Pamela said to the crowd last night.

She has dedicated her passion and creative talents to serving Trenton as Board Director for the Capital Area YMCA and the Trenton Health Team and Chair for the National Association of Diversity Officers in Higher Education. She also served as Board Chair and Director Emeritus of the Trenton Public Education Foundation and as part of the Advisory Board for Rider University’s Equal Opportunity Program.

“I must acknowledge my president Dr. Gregory Dell’omo of Rider University, and my supervisor, Dr. Leanna Fenneberg, Vice President for Student Affairs, who have allowed my vision of a 2100-square-foot Center for Diversity and Inclusion; a home away from home, especially for our underrepresented students to be built on our campus despite the challenges we faced over the past year,” Dr. Pamela Pruitt said.

Dr. George Pruitt, president emeritus of Thomas Edison State University, was instrumental in the conception and formation of Greater Trenton and served with great distinction as President of the founding entity known as Capital City Partnership and as a founding member of Greater Trenton’s Board of Directors.

Known for his tremendous leadership in higher education and critical role in the revitalization of Downtown Trenton, Dr. George Pruitt led Thomas Edison State University’s effort to restore and construct several historic and new buildings in Trenton’s downtown, preserving the essence of the city’s stately past while stimulating economic development.

“This city has enormous potential, a potential happening, and we people make things happen. This room is a wonderful assemblage of people who commit themselves to the future growth of our city. When I walk down the stairs…I walk down with great faith, confidence, and hope in the wonderful vision that the city has for it,” Dr. George Pruitt said to the crowd.

In addition to his redevelopment efforts, Dr. Pruitt was a driving force in strengthening public policy by establishing The John S. Watson Institute for Public Policy. He has given selflessly of himself, serving as a committed community champion to provide alternative access to higher education and promote economic growth in Downtown Trenton. He has also been active in the formulation of educational policy across the country and is among the longest-serving public university presidents in the nation.

“In Columbia, Maryland, there is a plaque on the wall that was put there by the genius who built that town, Jim Rouse,” Dr. George Pruitt said. “It says a city is a garden where people can grow, and I have never met a more prolific and wonderful gardener as Caren Franzini.”

The celebration honors the legacy of Caren Franzini, former NJEDA CEO and one of the founders of Greater Trenton. Anthony “Skip” Cimino, Executive Director of the Assembly Majority Office, spoke to the crowd about his experience with Franzini.

“Caren came up to me and said, ‘Skip, we got to get something started relative to the city of Trenton.’ I said, Caren, I’m pretty busy running a hospital. She said, ‘that’s okay, put that aside, and we will go take care of this.’ That was how Greater Trenton was formed,” Cimino said. “It was Caren that so many of us have said was the driving force to make sure that we managed to create Greater Trenton and now today we see the works that are being done with regard to the city.”

The Franzini family, Sam, Anna, and Sarah thanked the attendees for continuing to honor there mother in this way and introduced the Pruitts and a video that presented many of the amazing things they’ve accomplished over the years.  “Thank you all for coming and honoring my mother. We feel joyful to be here tonight,” Sam Franzini said.

George Sowa, Chief Executive Officer of Greater Trenton, explained to the crowd of attendees that goals for the night’s event were overachieved. “Events like this take much work to come together successfully. And I am pleased to announce that the event tonight is sold out, and we had to close ticket registration.” The portion of the proceeds from this event allocated to scholarships and internships for Trenton’s youth was exceeded.

Before the ceremony, Sowa joined Kevin Cummings, Board Chairman of Greater Trenton and  Chairman & CEO of Investors Bank, giving a toast to the honorees congratulating them on their awards. “Congratulations to the wonderful honorees who are committed to pushing Trenton forward in equity, diversity, inclusion, and making all the good things happen here. You are committed to trying to work together with great partners in this room and outside of this room, both on the public and the private side, to try to advance Trenton and make good things happen here,” Sowa said.

Past honorees of Greater Trenton’s Caren Franizini Capital City Award have included: Anthony “Skip” Cimino, an instrumental leader in the conception and formation of Greater Trenton and serves as Executive Director of the NJ General Assembly Office; Congresswoman Bonnie Watson Coleman, a long-time public servant and advocate for New Jersey families who was elected in 2018 to her third term in the U.S. House of Representatives; and Anthony R. Coscia, Esq., a close friend and mentor of the late Caren Franzini and partner at Windels Marx Lane & Mittendorf, LLP.

“The other thing that’s special about this is to be put in the same company of Tony Coscia, my good friend, and sister Bonnie Watson-Coleman, and my dear friend, Skip Cimino is deeply touching and humbling and I’m very grateful for that,” Dr. George Pruitt said.