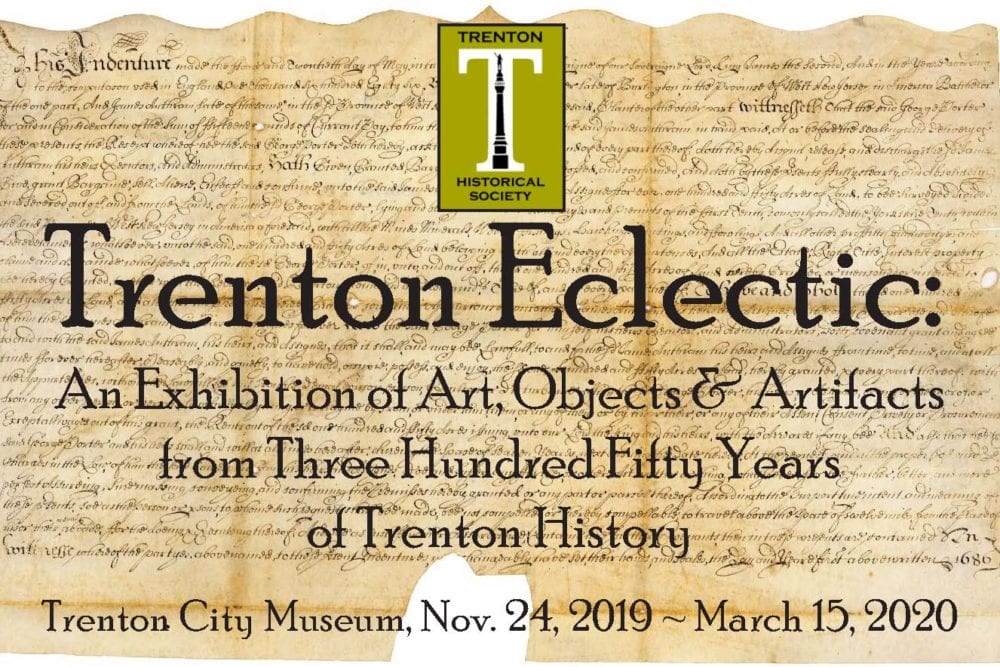 Don’t miss the well-received and one-of-a-kind exhibit, Trenton Eclectic, which closes on March 15, just a few weeks from now. It has something for everybody to enjoy, all from and about Trenton, on the second floor of Ellarslie Mansion, the home of the Trenton City Museum in Cadwalader Park (299 Parkside Avenue). Hours are Noon to 4:00 p.m. on Wednesday through Saturdays. It’s open to the public and free.

As best-described by Trenton Historical Society President Damon Tvaryanas, “Trenton Eclectic is not a ‘Greatest Hits’ assembly of the best known, most beautiful and most ‘historic’ Trenton artifacts and objects of art that could be brought together under one roof. Those objects are, for the most part, already on display in popular museums and other venues throughout the city. Furthermore, the range of objects on display is in no way intended to convey the full breadth and spectrum of Trenton’s past.”

Tvaryanas continues, “It would be impossible to compress a comprehensive telling of the city’s story into any single exhibit. The city does not have just one story and its history cannot be told from just one perspective. Important subplots and points of view would be left out and the memories of many who have contributed threads to the heavy tapestry of the city’s past would be justifiably offended.”

The haunting aspect of this broad-scope assemblage is that one can begin to feel the sense of time of several different generations. The art and objects have realness that engages the viewers, young and old. Tvaryanas explains, “Instead, this exhibit is, as its title suggests, an eclectic collection of items assembled from the closets and dark corners of the city’s museums and from other less often viewed public and private collections. If you are a student of Trenton history, you may have seen some of the items before. Others will likely be new to you. To a degree, the objects displayed and the topics addressed unapologetically reflect the fancy and whim of those responsible for planning and assembling this exhibit. But our choices have been shaped by the items available to us, by our goal to tell lesser known stories and by an only partially successful attempt to steer clear of well-worn paths. The Battles of Trenton and the Pottery Industry cannot be excluded from any recounting of Trenton’s Past. They will find a way to echo in the background of any Trenton song.”

This exhibition is the crowning event in the Trenton Historical Society’s yearlong celebration of its one hundredth anniversary. It is co-sponsored by the Trenton City Museum and assembled with assistance from many of Trenton’s best historic and civic institutions. It’s a masterpiece you don’t want to miss.