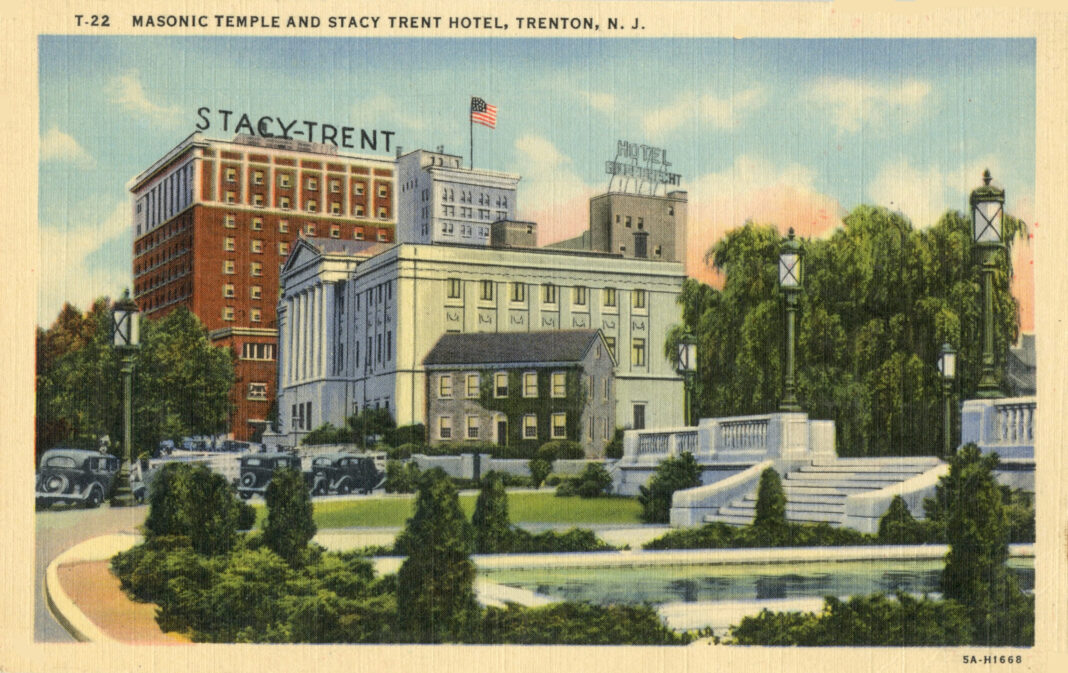 Throughout the 20th century, the City of Trenton was booming with industry and excitement. With a thriving manufacturing hub and bustling downtown, Trenton was the place to be. The Stacy-Trent Hotel embodied this portion of Trenton’s past in many ways. The Trenton City Museum recently released an expansive collection of literature and resources exploring the Stacy-Trent and what its presence meant for the Capital City. Additional details regarding this new collection are available here: Ellarslie – Exhibits. In light of this exciting new exhibit, let’s explore the legacy of the iconic Stacy-Trent Hotel.

The Stacy-Trent Hotel, located on State and Willow Streets, opened its doors in 1921. The hotel was named after Trenton’s founders, Mahlon Stacy and William Trent. Their opening day, September 21st, 1921, kicked off with a celebratory dinner and dance. During this opening soiree, the hotel hosted over 1,500 as they strolled the luxurious rooftop gardens. Upon its opening, the Stacy-Trent would serve as a critical meeting place for various exciting functions. The hotel guests included celebrities, dignitaries, politicians, and more.

In many ways, the opening of the Stacy-Trent ushered in a new era for Trenton. Finally, they had a world-class hotel downtown, signaling to other cities across the country that Trenton was a force to be reckoned with. After all, it is during this era that the “Trenton Makes, the World Takes” motto came to be. Moreover, the hotel was a point of pride for many of Trenton’s residents. As a popular gathering place for professionals and politicians alike, many esteemed guests made the hotel their venue of choice for both civic and social activities.

As beautiful as it was impactful, the Stacy-Trent was indeed a sight to behold. The building boasted a stunning brick exterior with stonework and detailing embellishing the sides. The hotel lobby greeted guests with ornate carpets and decorations, larger-than-life palms, and a welcoming place to settle in for their stay. One of the premier benefits of the Stacy-Trent was the incredible views it offered to patrons. In the main dining room, guests could enjoy a spectacular view of the Old Barracks and the Statehouse. Other amenities included a state-of-the-art ballroom, elegant dining rooms, intricate interior design, and more. 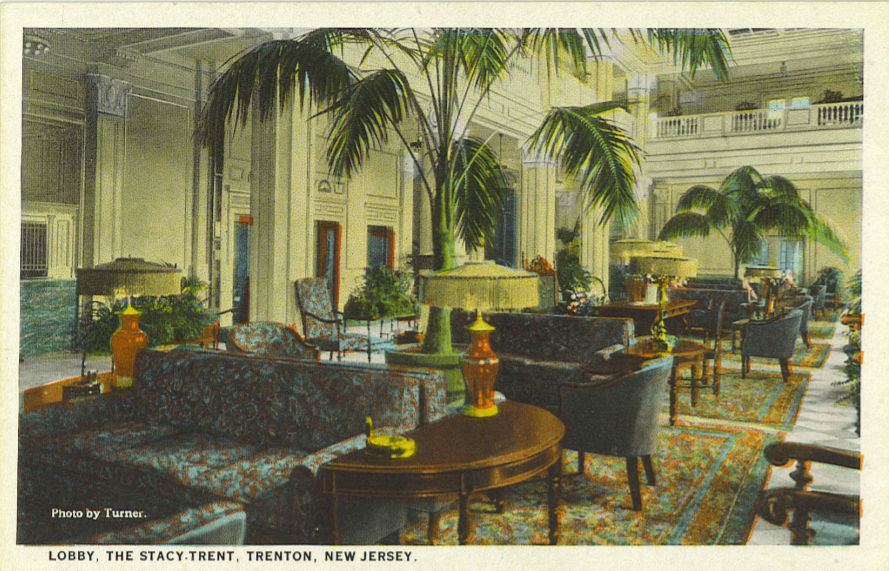 In an article released on the opening day of the Stacy-Trent, the Trenton Times celebrated this momentous occasion in the city. In their piece, the author noted, “The opening of the beautiful new hostelry at State and Willow Streets marks as important a forward step for Trenton as any of the conspicuous improvements in its history. It will advertise the city to the entire country as no ordinary publicity measure would. Moreover, the Stacy-Trent will link us up with a fine chain of cities in each of which the United Hotels Company of America is represented. These cities include Niagara Falls, Albany, Birmingham, AL; Erie, PA; Harrisburg, Hamilton, Ont.; Newark, NJ; Montreal, Rochester (two houses), Syracuse, Toronto (the famous old King Edward), Utica, Worcester, and similar populous centers, widely distributed, thoroughly alive, sanely progressive.”

The Stacy-Trent Hotel was a highlight of the Downtown Trenton landscape for many years. However, after many years of service, the Stacy-Trent began experiencing difficulties that would ultimately lead to the hotel’s closure in 1967. Over four decades, the hotel changed hands many times. In 1960, McPherson Operators announced plans to convert the hotel lobby and lounge to a brand-new ballroom. However, these plans quickly fell through, and in 1962, McPherson filed for bankruptcy. As the hotel’s decline continued, more than 100 Stacy-Trent employees walked out during the strike of 1963. Throughout the latter half of 1963, efforts would continue to save the hotel. Cherry Tree Lane Inc., a Trenton-based conglomerate, attempted to buy the hotel for the next three years, but their efforts were ultimately futile. Finally, in 1967, items from the Stacy-Trent were auctioned off, and the property was demolished just a few short months later.

Although the hotel ultimately closed, its impact on the city will never be forgotten—the Stacy-Trent Hotel ushers in memories of the Trenton of yesteryear. As we reflect on this period of growth and progress in the city, we can be inspired by the advancements of those who came before us. As a new generation of leaders ushers in Trenton’s next remarkable renaissance, may we never lose sight of our incredible roots. 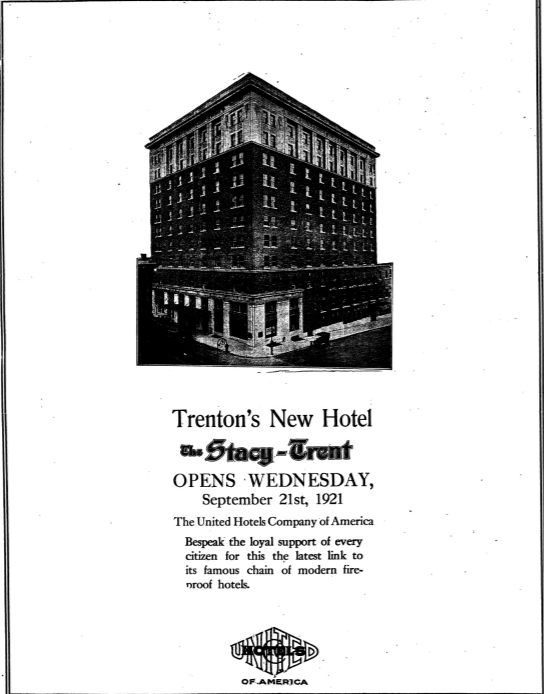