TrentonDaily
Home History This Week in History: Raise a Toast to the Eagle Tavern 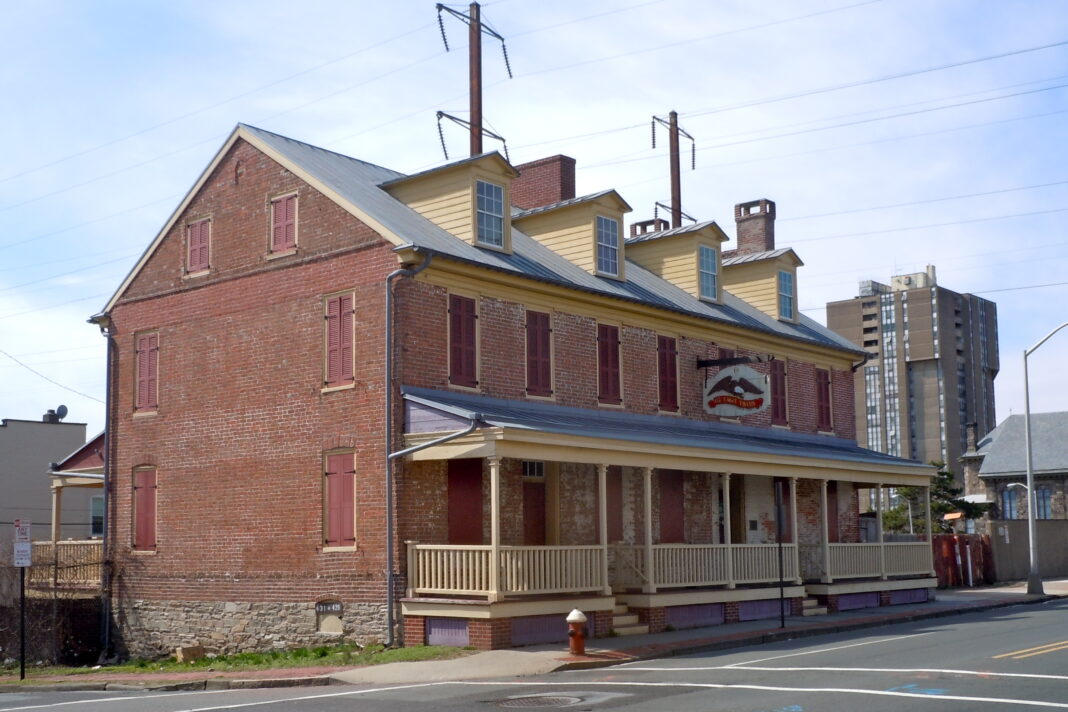 Although many things have changed since the founding of Trenton, the desire to hit the town and grab a drink with friends has transcended generations.

The Eagle Tavern, built in 1756, was a beloved 18th-century tavern with a rich and expansive history. The structure is one of Trenton’s oldest and most historically significant locations. It is suggested that Philadelphia merchant, Robert Waln, erected the iconic building. In 1765, Waln purchased Trenton Mills as well as a variety of holdings from the Kingsbury estate. These holdings helped to establish Waln in the community as a significant force in the Trenton business community. At the time of its construction, the Eagle Tavern was likely built initially as a private residence. In fact, after its establishment in 1756, it is suspected that the Waln family occupied the home. Nestled on the corners of South Broad St. and Perry St., the tavern has remained a consistent presence for some of Trenton’s most historic moments.

The American Revolution commenced shortly after Waln purchased and constructed the future Eagle Tavern. In December 1776, the first Battle of Trenton took place, with significant military activity occurring within the vicinity of the tavern. Maps around the lower Assunpink, produced by Hessian lieutenants Wiederhold, Piel, and Fischer, all notate a building on Queen and Ferry St. that is believed to be the Eagle Tavern. In addition, on the map Fischer produced, he placed a T next to the location and noted “Commands which retreated to Burlington”; this notation indicates that the Waln residence may have housed British and Hessian officers after their defeat in Trenton. Although it is unknown precisely who was residing at this residence during the Revolution, it is unlikely that the Waln family could have remained at the property throughout the war.

After the conclusion of the Revolution, Robert Waln would, unfortunately, pass away a few short years later in 1784. The property was then passed down to his daughter, Hannah, who was reported to live at the residences throughout the 1780s. Hannah Waln married Gideon H. Wells in 1790 and remained at the property through the early 19th century. However, the Trenton Mills, owned in part by the Wells, ultimately went bankrupt in 1803, and ownership of the property was turned over to Robert Waln, Jr. The property was then turned over to Jacob S. Waln, another family member, in a suspected attempt to keep the property from being confiscated due to bankruptcy.

After much back and forth, the property was finally removed from the Waln family ownership in 1811. The property continued to shift back and forth between various owners until 1817 when George Douglass filed for a license to sell alcoholic beverages. Although the exact dates are unclear, it is suspected that the property was first used as a commercial venue during the second decade of the 1800s. At the time, horse racing was a popular sporting event, and the Eagle Tavern harnessed this moment to increase the tavern’s popularity. The Eagle Race Course, Trenton’s race track, was located just a short while away from the Eagle Tavern. Because of this proximity, the tavern became a favorite meeting place for track owners, horse owners, and race attendees. This boom led to the tavern’s expansion between the 1820s and 1830s.

After the expansion, the tavern’s popularity only continued to grow. As the Eagle Tavern emerged as a landmark in the community, it became a popular spot for travelers between New York and Philadelphia. In addition, the Eagle was a favorite of business owners, politicians, factory workers, and other working-class individuals. The tavern was also a hotspot for gambling at the time, attracting additional customers through their doors. The public house was a lively and inviting environment, serving as a social and civic hub. The property was also used as a meetinghouse for the Masons. The property would continue in this vein until the 1890s, when the property was ultimately converted into a hotel.

Although the property would remain open throughout portions of the 20th century, the tavern would serve its final round in 1896. The property was a rooming house until the 1950s, when it closed its doors for good. In 1972, the Eagle Tavern was added to the National Register of Historic Places due to its historical, architectural, and sociopolitical significance. Between 1976 and 1981, the tavern underwent a joint archeological investigation from local students and the Trenton Historical Society. Although we unfortunately no longer have access to the field records from this investigation, a broad range of artifacts was secured from subsequent studies in 1979.

Today, the Eagle Tavern is owned by the City of Trenton. There have been attempts to revive the property, but unfortunately, these efforts have been futile so far. Presently, discussions are being held regarding potential ways this property can be revitalized and restored to its former glory. While we anxiously await the next part of this historic building’s history, reflecting on its past can bring immense inspiration for the tavern’s next chapter. Looking back at this landmark pub, let us raise a toast to Trenton’s own Eagle Tavern.