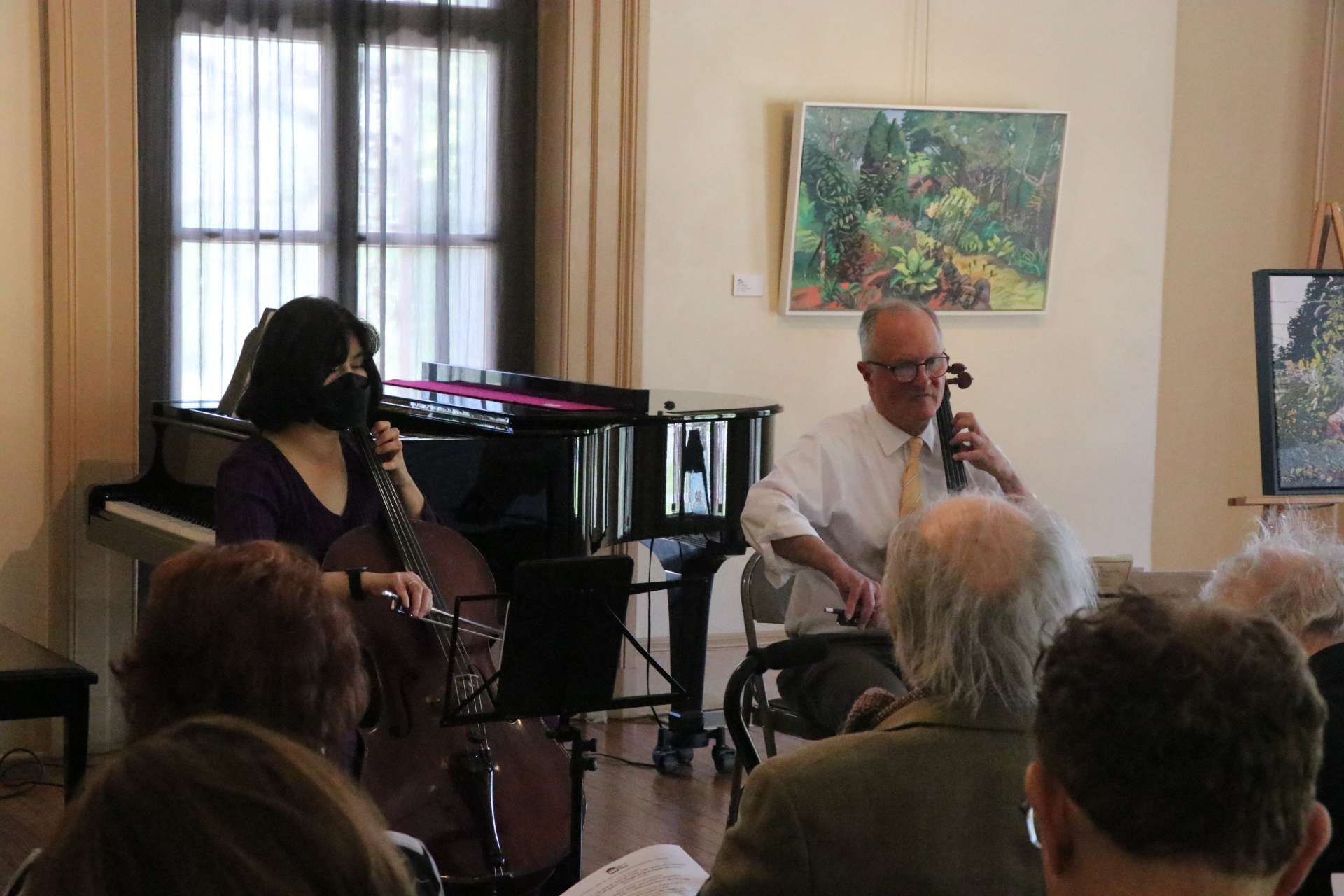 The Trenton City Museum at Ellarslie finished its five-month-long exhibition with applause and music on Saturday. The exhibition, Painting the Moon and Beyond, featured Trenton Legend Lois Dodd and her colleagues, Jeff Epstein, Dan Finaldi, and Elizabeth O’Reilly.

Ilene Dub, Curator of the exhibit, was excited to finish the project on a high note. “Here we are, the cherry blossoms are blooming, and we have a fabulous crowd, and it’s the culmination of what has been a very well attended and well-loved exhibition. And, you know, what a great way to end with a well-loved performance of cello,” Dub said.

The closing ceremony of the exhibition featured two cellists, Mira Kang and Eric Schultz, who serenaded the crowd. Kang is an accomplished concert soloist who has appeared on many renowned stages. Well, Shultz performed Nocturnes, Arias, and Artistic Memories; he is a producer and director of arts programming, including State of the Arts.

“Well, I played the cello recital as part of the festivities. I don’t usually play the cello. I usually just play for fun and my own pleasure these days,” Shultz said. He explained that he and Dub are working on a project on the History of Ellerslie and Cadwalader park for his company State Of The Arts. “So she has been coming to my house a lot, to review scripts and edit. Last winter, at some point she arrived, I was just sitting in the living room playing the cello to relax a minute. And she got this idea, (She said) ‘Oh, you should come play.’ So that’s how this happened.”

The day held guest speakers from the artists, guests like Mel Leipzig, known as the Checkov of Trenton for his work in Classical Painting, said a few words to the crowd. “I love this museum,” Leipzig said after the ceremony. “It’s important to the city, first of all, artists need to show their work. That’s number one.  We want to show our work. If you’re an artist, you want other people to see it. You know not just in your living room. So this is really a wonderful place.”

This show has seen the pandemic peak starting in the early fall of 2021, and the Trenton City Museum was more than happy to welcome guests back in the doors on Saturday. Sarah Unger, a Trustee with the Trenton Museum Society, explained that she thinks the good turnout is thanks somewhat to the pandemic.

“I think the turnout correlated with the restrictions during Coronavirus virus… because the show was open for a good five and a half months. It really did give people a chance to come out and see this extraordinary display, this showcase of incredible art and the friendships among the artists,” Unger said.

For the artists, the main takeaway is the friends that they made along the way. O’Reilly explained that unlike other types of artistry, landscape painting is very sociable. “Like Dan and Jeff. I also went to Brooklyn College,” O’Reilly said, “So it’s like a nice show for the generations of artists who influenced each other and who painted together. Painting outside is very sociable; there’s more camaraderie really with landscape painters, I think than other kinds of painters.”

The next opening is tomorrow, May 7, from 4 p.m. to 7 p.m. with an artist talk at 2 p.m. The exhibition host Stephen Bruce, a San Francisco Bay Area Artist who creates acid-etched copper panel artwork.