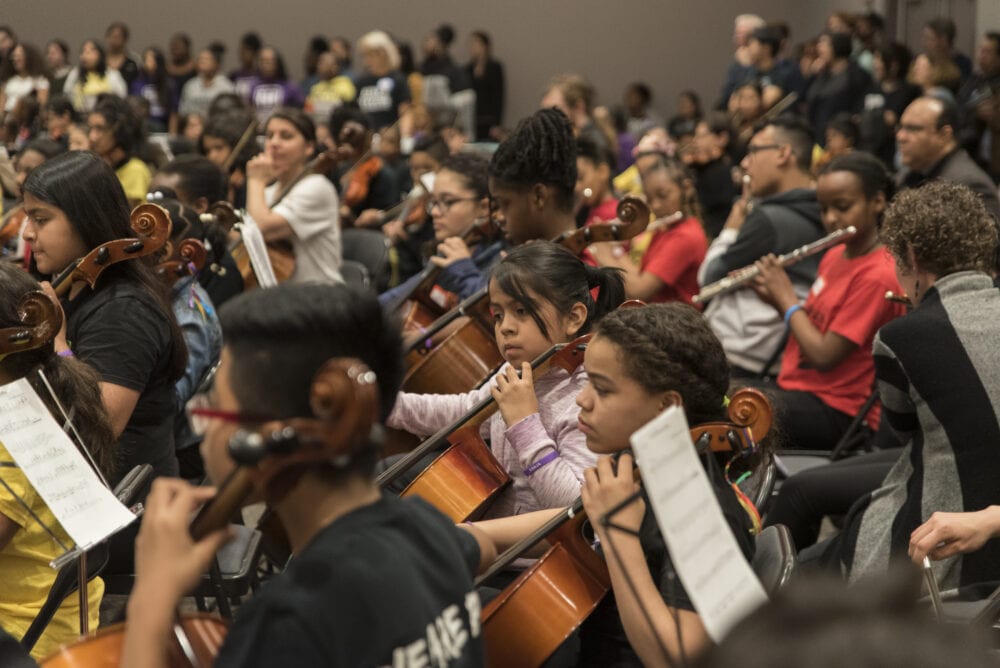 Today, Monday, January 18, 2021, the Trenton Music Makers (TMM) Orchestra will present their annual Martin Luther King Day Concert, “We Shall Overcome.” In an abbreviated 13-minute format on YouTube Live, the event will be available to stream at 6:00 p.m. free of charge.

“This is our fifth annual Martin Luther King Day performance,” said Carol Burden, Executive Director of TMM. “We’ve had a celebration as long as we’ve had a youth orchestra… This is really a gift to the community from us.”

Since January of 2016, TMM has presented the community with a celebration for Martin Luther King Day. In their first year of operation, TMM broadcasted the film, ‘Crescendo! The Power of Music’ directed by Elizabeth Kling and Jamie Bernstein, daughter of famous composer Leonard Bernstein. “We  screened that film, and Jamie came and did a Q&A and introduce some of the people who had been in the film, and our audience got a really nice picture of what it was that we were building,” said Burden.

In the years to follow and as the organization grew, TMM had the opportunity to produce a concert for the holiday. However, with 2020 heavily influenced by the COVID-19 pandemic, TMM had to overcome some obstacles to give the community the annual concert.

“For a couple of weeks, we were getting the kids together in person to a really limited extent,” said Burden, “but it just sort of became apparent to us as we looked around [that] it wasn’t a comfortable thing to be doing yet, so we closed back down.”

In previous years, TMM would meet four to five days a week after the kids finished school. These sessions would allow for parents to have a place for their children to attend after school hours, but also for longer rehearsal and learning periods for the students to perfect their instruments. However, in the new digital format, TMM members only meet three days a week on Zoom for a couple of hours.

“In taking a program like ours virtual, we need our sessions to be shorter and more focused just because our kids are just as Zoomed out as we are,” said Burden. “It’s not real fulfilling to them. They don’t want to hang online for a long time, so we’re encouraging them to do more self directed learning now that we’re meeting virtually.”

The lack of in-person rehearsal made creating the Martin Luther King Day concert that much more challenging for TMM. However, with the help of some talented staff, the organization was able to make this years’ concert happen.

Well-known Haitian musician, Raoul Denis Jr., a newer staff member who has been working for TMM on music production, spent the last month collecting audio and video from the youth orchestra. In addition, Princeton University, as part of their Trenton Arts at Princeton (TAP) project, offered TMM a video engineering work-study student to help piece together the concert. “Maddie Wu is her name. She’s a Princeton University student and she just has mad skills with consumer video and social media, and she put together the video side of the virtual concert,” said Burden.

Although this year’s concert is shortened to a 13-minute video, TMM was still able to provide the community with a traditional song. “The kids, just about every year, have played ‘Lift Every Voice and Sing’ because it’s an opportunity for our audience to stand and sing along with them and it’s an appropriate thing to play and sing on that holiday,” said Burden. “It’s the African-American National Anthem.”

After a year plagued with social injustice, it was important for TMM to provide the community with the Martin Luther King Day concert. Through music, TMM hopes the show will offer Trenton an outlet for conversation.

“Music so often fills in the gaps for the things we don’t have words for, and now is a time where there’s a lot we want to say and it’s easy to miss speak,” said Burden. “I hope music will be helpful in that regard.”

She continued, “My hope is that it will well express our wishes and our kids wishes for our country and our world right now. Dr. King didn’t mince words. He didn’t just say, ‘hold hands and sing and everything will be okay.’ He really called on people to make changes and to have hard conversations, and to resist marginalization and oppression. These are things that our kids want to honor.”

To take part in the Martin Luther King Day: We Shall Overcome concert, visit the Trenton Music Makers homepage, www.trentonmusicmakers.org, or visit bit.ly/TMM-MLK21.