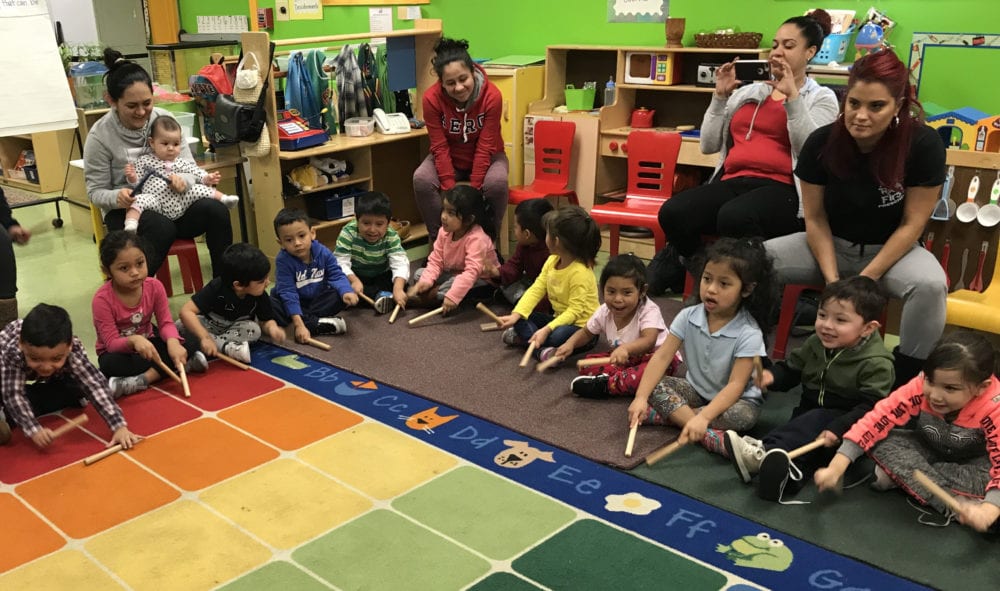 Ms. Ragen, the founder of Trenton Music Makers’ Music for the Very Young, launched the program in 2000 in the wake of the landmark Abbott v. Burke decision, which brought universal Pre-K to Trenton. In the intervening 21 years, thousands of Trenton preschoolers have engaged in high-quality music and movement in their schools, hundreds of preschools teachers have received mentorship in building a musical classroom, and parents have joined their children for Family Music Parties at school, and played music games at home with the books and recordings they receive as part of the program.

Kelsey Swanson joined the team as Project Coordinator in 2015, when Trenton Music Makers was selected by PNC Bank as a partner in its Trenton Makes – WORDS! program. Together with teaching artists from The Children’s Home Society of NJ, and the State Museum of New Jersey, Ms. Swanson helped young children and their parents discover the joy of new words, in a collaboration that used music, science, and multicultural adventures to support vocabulary development and kindergarten readiness. With the conclusion of this three-year project, she built on her previous success as a teacher with Music Together, and with the Princeton Montessori School by joining the teaching artists bringing Music for the Very Young to Trenton children.

Since 2018, Swanson taught classes at Carolyn Stokes Preschool, Children First Academy, and Mercer County CYO Preschool, and she will continue to teach while serving as Program Director.

“We are so fortunate to have such a strong team member to whom I can pass the baton,” said Ms. Ragen. “Already known and respected by most of our school partners, beloved by the children and their families and trusted by her colleagues, the transition to Kelsey’s leadership will be nearly seamless. The future for MVY is bright!”

Music for the Very Young: Music, Movement and Literacy” was created in collaboration with Trenton Public Schools’ Office of Early Childhood Programs and Music Together, and first operated in partnership with the Puerto Rican Community Day Care Center. It has won a national Mattel Foundation award for excellence in early childhood literacy (the first music-based program ever to have won this award), and was also the participant with the Trenton Public Schools in a significant three-year Innovation Research Grant from the U.S. Department of Education. It receives major funding from the Geraldine R. Dodge Foundation, PNC Grow Up Great, the Nordson Corporation Foundation, and many generous individuals and family foundations in the region.