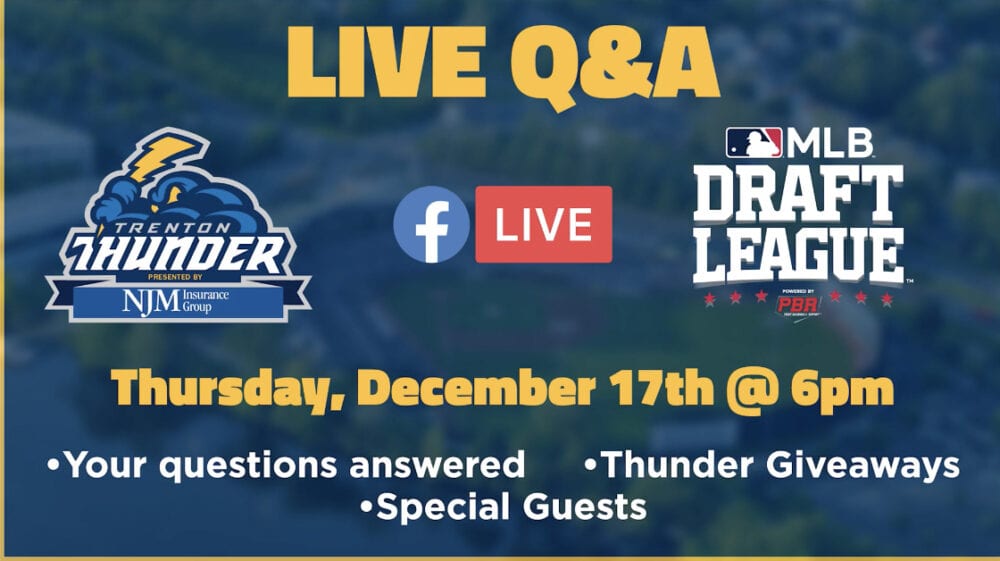 On Thursday, December 17, 2020, Trenton Thunder is planning to host a live Q&A session on Facebook at 6:00 p.m. to answer fan-submitted questions regarding next year’s baseball season.

After sudden changes occurred this year when the New York Yankees abandoned their affiliation with Trenton Thunder, the team had to quickly “change bases.” Last month, a huge win for Trenton was announced as Trenton Thunder became a founding member of the new Major League Baseball Draft League for 2021. The team is presenting this Q&A session to clarify all of the new changes in-store for the league.

“When you’re entering into something new, we really just wanted to reach out to our fans and let them know that, if they had any questions, we’d be more than happy to answer,” said Thunder GM/COO Jeff Hurley. “We just want to be upfront and honest with them about as much as we know about this new draft League. I think if we can answer all their questions in one spot, that’s one of our goals.”

Trenton Thunder has never done a virtual live Q&A session before. Since the baseball season ended and the COVID-19 pandemic continues to limit close-contact entertainment, it has been awhile since Trenton Thunder fans visited the ballpark. According to Hurley, Thunder chose this Facebook live platform to give fans a sense of normalcy and excitement.

“We figured, ‘hey, let’s go virtual, let’s see our face,’ and we wanted to pretty much be visible to our fans and answer any questions that they might have about the new draft League and just have some fun with it as well,” said Hurley.

So far, Trenton Thunder has received a wide variety of questions ranging from the entertainment aspects of the park to the name and logo, as well as questions regarding recruitment for the team. “Whenever you do something new, it’s always unknown, if you’re going to keep a lot of the stuff that you’ve done in the past,” said Hurley. “We’re going to answer all those questions and have a little fun with it.”

To add to the excitement of the virtual event, Thunder is submitting all of those who ask a question into a raffle for a chance to win some ballpark prizes. The prizes include a Carl Pavano autographed Yankees jersey, a Bo Bichette autographed baseball and a Deivi Garcia/Domingo or Acevedo/Kellin Deglan autographed baseball. In addition, the Q&A will feature some pending guests, including former Cape Cod League coach and newly appointed draft league president, Kerrick Jackson.

“We’re excited about it,” said Hurley. “We think it’s gonna be a lot of fun. We’re prepping for right now and we look forward to answering all the questions with our fans.”

“It’s going to be great just to have baseball back after we missed it so badly and during the 2020 season,” said Hurley. “Just interacting and having fun, smiling for that one hour [is] a reminder that Trenton Thunder is coming back, and we can’t wait to be at the ballpark during the summer in 2021.”

To submit your questions for the live Q&A event with Trenton Thunder, click HERE.