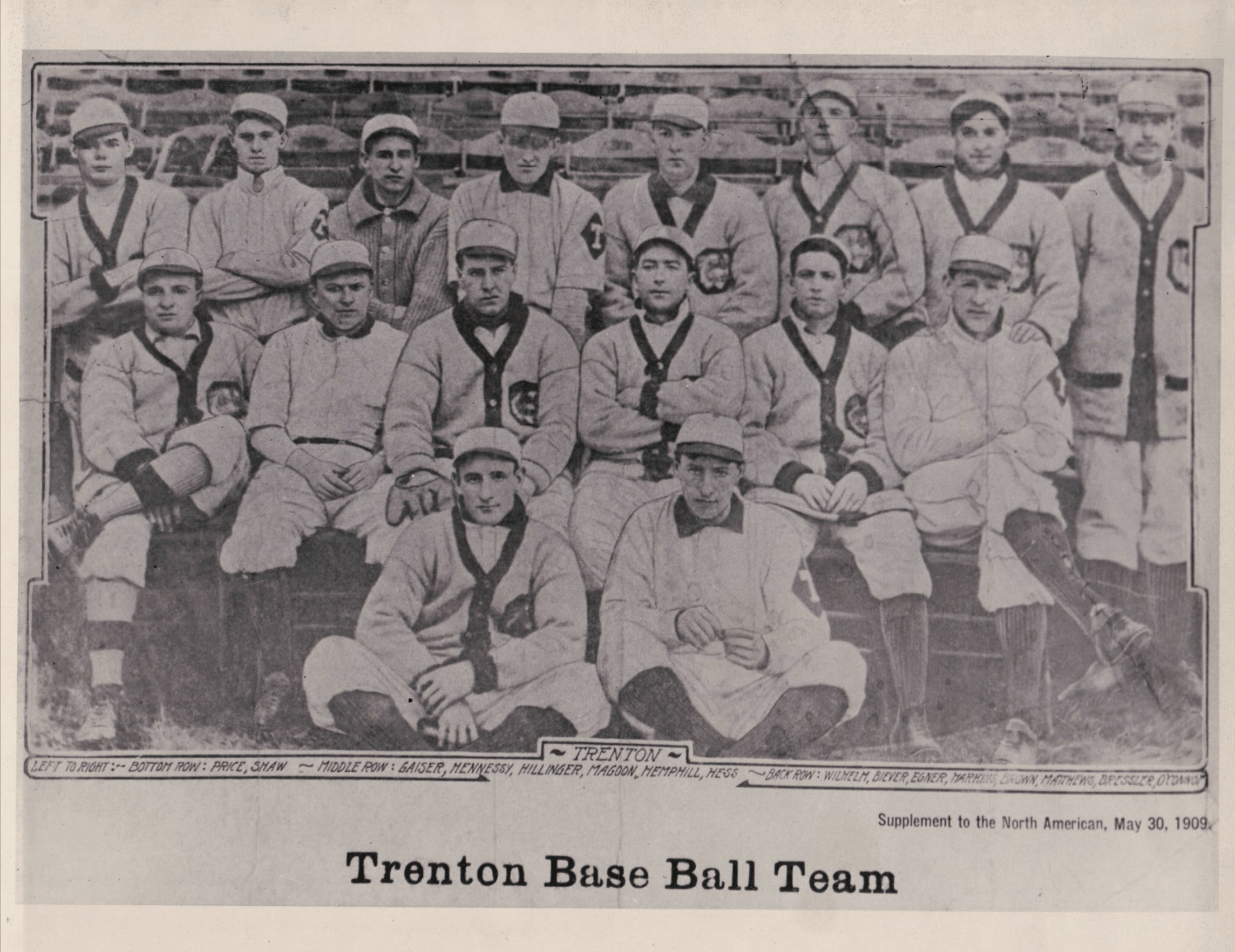 According to the Reading Times, a former PA publication, the opening day in Trenton was “not ideal weather for baseball.” However, despite raw, sharp winds that “caused players and spectators to shiver,” the seasons launch attracted a crowd of 3,000 people.

Preceding the game, players, fans, city officials, club owners and officers gathered inside automobiles on the main streets of Trenton to parade as an opening-day celebration. The pre-game party lasted until 3:00 p.m.

Around 3:30 p.m., the Trenton Tigers strutted on the field in their new uniforms. Dressed in all white, the Tigers wore grey sweaters with V-shaped chevrons on the sleeves and a tigers’ head sewn to the chest. The team was greeted with cheers from the packed audience.

At the center of the baseball diamond, the team met with their rivals; the Reading Dutchmen. The Dutchmen sported “sober grey” uniforms with blue sweaters, stockings and caps. According to the Reading Times, the PA team looked very “business-like.”

Before the game began, Trenton Tiger team captain, George Henry Magoon, lead the traditional ceremony of hoisting the Tiger’s pennant. Quick to follow, a bell was rung and the former mayor of Trenton, Mayor Walter Madden, walked to the pitchers mound to throw the first pitch, marking the beginning of the 1909 Tri-State, minor league baseball season.

Both teams played a tough game throughout the first nine innings. The crowd was kept on their feet as the ninth inning came to an end with a tied score of 4 to 4. In panic of losing, the Trenton Tigers resorted to extreme tactics in hopes of winning this match.

According to the Reading Times, “When it grew dusk, but not dark, and the score tied at 4 to 4, the Tigers resorted to all sorts of tactics to delay the game in the hopes that the umpires would end the contest on the ground of darkness.”

The Tigers threw the ball around unnecessarily and teammate Hennessy (middle row, second from the left), “lost” the ball under the right field fence. As the tactics failed to work, Reading quickly went ahead with a score of 6 to 4.

In hopes of saving the game, left-fielder Shaw (bottom row, on the right), deliberately muffed a catch off a bat. He assumed by doing this, the umpires would believe it was too dark to see the ball and call the game a tie until a brighter day.

However, sadly for the Trenton Tigers, the umpires saw right through the rouse and forced the Trenton Tigers to promptly forfeit the game, leaving Reading to a win of 9 to 0. Fans of the Tigers were let down and “felt very sore over the foolish tactics of the home club.”

Despite the foolishness of the opening day event, the Trenton Tiger fans continuously followed the season in hopes of a recovery from the team.

The 1909 season for the Trenton Tigers remained a struggle. Although individually, the players were said to be talented in their own right, the team had a tough time pulling off wins that season.

According to The Philadelphia Inquirer in June of that year, third baseman Hess was “the find of the season.” They wrote, “Every move (from Hess) is that of a baseball player.”

In addition to their struggles in team performances, the Tiger’s club secretary, Dick Smith, resigned that year due to business controversy. As news leaked to the public, fans of the Trenton Tigers were disheartened. Many believed Smith to be the sole reason Trenton was given a team in the Tri-State League.

Between the struggle of the team and the leadership controversy, it is inconclusive as to what place the Trenton Tigers came in that year. However, the 1909 Trenton Tigers team and opening-season game remains an interesting story today, over 100 years later.