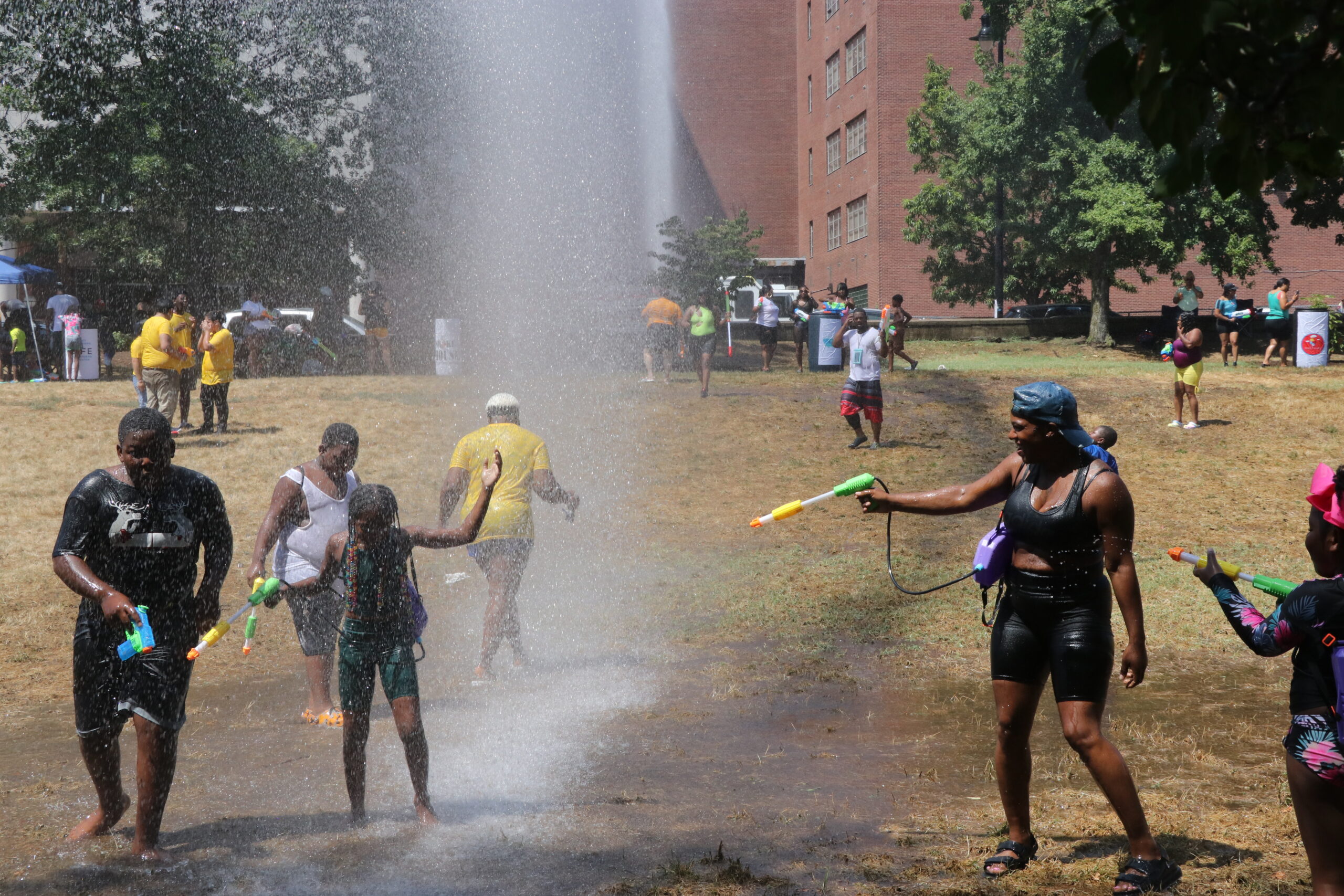 Temperatures hit 95 degrees on Saturday in Trenton, NJ. Residents buckled down with fans, air conditioning and crowded the local pools to escape the heat. However, those at Mill Hill Park found a different way to cool down with water guns and a fire truck.

The Second Annual Summer Splash was brought to Trenton by the 90’s Kidz, an organization created by three Trenton residents focused on providing a safe and fun outdoor experience for Trenton kids.

Tyrell Smith, one of the Founders of the 90’s Kidz, explained that this was the second year they brought this event to Trenton. “We created this event because of the height of the gun violence in 2021 and what is going on with COVID. We just thought the kids in the city needed a trauma-free break day,” Smith said.

Trenton resident Ashley Ellis brought her two daughters along. The three were thoroughly soaked as they ran underneath the fire truck’s hose. “This is so awesome. The kids love it. The firefighters are out here with the truck and this is just awesome,” Ellis said.

“It’s important because they need to see different aspects of the men and women that served them. It’s also important that they have some type of connection with the fire department that isn’t something as tragic,” said Eric Johnson, the Community Relations Specialist.

Using a fire hydrant to cool down is as old as the invention itself. Trenton is no different when it comes to that. Johnson explained that he wants to have more events that use the hydrants for recreational purposes during the summer.

“We used to, we slowed down on it mainly because there was a lot of residents just doing it on their own. But it is something I’m trying to implement and try to get back into, but it’ll be more organized. So we’ll probably set out dates and designate blocks or streets in which we open up the fire hydrants so we can have like an event that just happened this weekend,” Johnson said.

The 90’s Kidz is led by Rasheeda Brown, Tyrell Smith, and Courtney Spear.

“I’m excited about being out here,” Brown said. “I’m a nurse and I work in trauma, so I see a lot of gun violence, a lot of young kids come in, you know, shot and things like that. So I rather see kids playing with water guns than real guns.”

Last year the weather wasn’t on their side. Brown explained that it was cold, cloudy, and windy. This year, however, was the exact opposite as the heat wave hit its peak in Trenton.

Along the park’s road, black barrels with drench signs were showcasing different sponsors. Each barrel gallons held water for participants to come, quickly fill up their water guns, and sprint out before being doused in water by others.

Spear explained that he wanted to include all Trenton residents in the fun. “This is the hottest weekend of the year. So why not come out and join us. You know, it’s not just for the kids and teenagers but adults and the older people,” Spear said.

That message seemed to resonate as Trenton residents came in shorts, t-shirts, and bathing suits. Fathers came with daughters; families dueled it out, and children slipped and slid down Mill Hill as they tried to dodge the jets of water from each other.

Ramiz Thomas, Trenton Resident, born and raised, brought his two-year-old daughter with him. “It’s a beautiful thing, you know…. It’s fun. It’s family. It’s Trenton. That’s, honestly, what Trenton is when you get down to the root of it,” Thomas said.