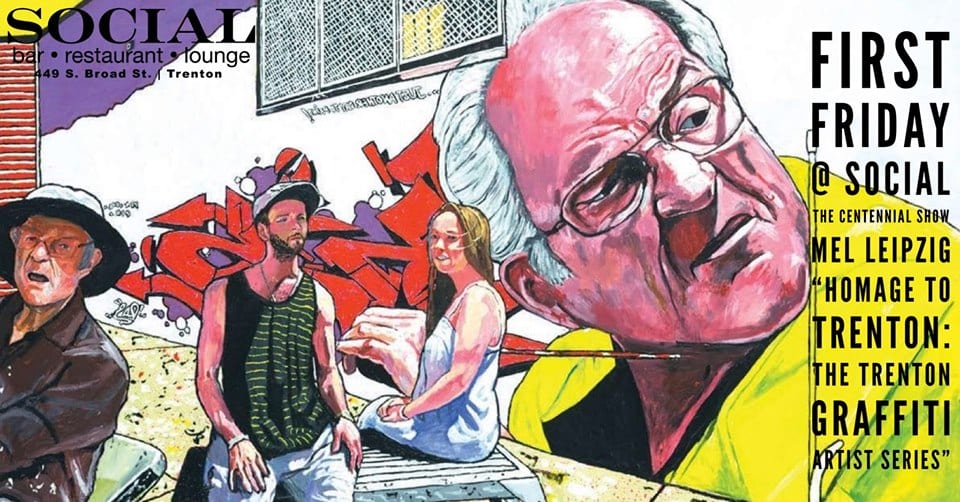 Trenton Social describes the exhibit in the following manner:

In honor of Trenton Social’s 100th First Friday, we’re proud to present The Centennial Show, featuring one of Trenton’s most prominent artists, Mel Leipzig. This special two-month-long exhibit will showcase a collection of Mel’s work entitled “Homage to Trenton: The Trenton Graffiti Artist Series.” The show will open on Friday, July 5th – with a special First Friday reception with the artist – and run until September 5th.

MEL LEIPZIG, born in Brooklyn in 1935, resides in Trenton, N.J. He was a Professor at Mercer County Community College where he taught Painting and Art History until his retirement from teaching in 2013. He has had over 40 one-man shows, including shows at museums, art centers and university galleries in New York City, New Jersey, Florida, Georgia, Maryland, Pennsylvania, and Arkansas. He had a Retrospective at the New Jersey State Museum in 1998. In 2009 he was the subject of two exhibitions at the New Jersey State Museum. One, a selection of his paintings completed in the first decade of the new century, “Mel Leipzig, Selected Paintings”, curated by Margaret O’Reilly, Curator of Fine Arts and the second, “Mel Leipzig, The Artist As Curator”, an exhibition of gurative paintings from the collection of the museum, curated by Mel Leipzig.

Leipzig received a Fulbright Grant to Paris (1958-59), a Louis Comfort Tiffany Award (1959-60), and four grants for painting from the New Jersey Council on the Arts (1982, 1986, 1992, 2002). In 1980 he was the first recipient of the Mercer County Community College Distinguished Teacher Award, Gold Medal and in 1996 was one of the last individual artists to receive a grant in Painting from the National Endowment for the Arts. In 2000 and 2002 he received awards for his paintings from the National Academy, NYC.

He is one of the seven painters included in the book SELECTED CONTEMPORARY AMERICAN FIGURATIVE PAINTERS, published in 2010 by the Tianjin People’s Fine Arts Publishing House, edited by Qimin Liu, the purpose of which is to introduce contemporary American realist painting to China.

In 2006 Mel Leipzig was elected to the National Academy. In 2011 NJN, New Jersey Network, produced a half hour program, 3 years in the making, called “Mel Leipzig: Everything Is Paintable”.

Read and see more at www.melleipzig.com