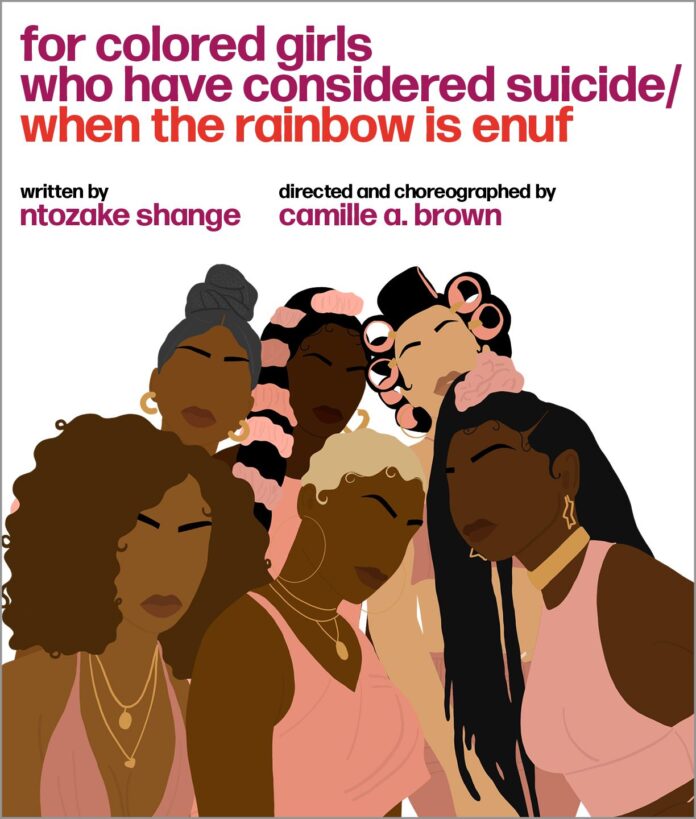 The tour de force for colored girls who have considered suicide/when the rainbow is enuf by celebrated playwright and Trenton native Ntozake Shange is set for a highly anticipated Broadway revival this Spring. Directed and choreographed by Tony Award nominee Camille A. Brown (Once On This Island, Choir Boy, co-director and choreographer of Fire Shut Up in My Bones) in her Broadway directorial debut, the groundbreaking work returns to the Booth Theatre (222 West 45th Street) where it premiered in 1976. Performances for the 20-week limited engagement begin on Friday, April 1.

Born Paulette Linda Williams in Trenton on October 18, 1948, the 1966 Trenton Central High School graduate went on to study at Barnard College and the University of Southern California and a lifetime of creating art consumed by the masses. The feminist writer’s life work included 15 plays, 19 poetry collections, seven novels, five children’s books, three collections of essays along with numerous performances as a dancer and spoken word artist. Shange’s signature piece for colored girls who have considered suicide/ when the rainbow is enuf has captivated audiences across generations. The new, fully reimagined production under the direction of Brown is set to delight a new crop of theatergoers on Broadway.

In honor of Shange, REALEMN Productions, the official for colored girls who have considered suicide/ when the rainbow is enuf multicultural marketing agency helmed by Trenton native Toni Israel, has created a series of theme days and nights for area residents to see the show together. The first Trenton Day will be Wednesday, April 13 at 2 p.m. Visit https://www.realemnproductions.com for more information on other For the Culture Nights on Broadway. #BroadwayIsForYou

Join the circle as seven women share their stories and find strength in each other’s humor and passion through a fusion of music, dance, poetry and song that explodes off the stage and resonates with all. It’s time for joy. It’s time for sisterhood. It’s time for colored girls.
Black girl magic is reborn. Ntozake Shange’s for colored girls who have considered suicide/ when the rainbow is enuf is the “landmark of American theater” (The New York Times) that blazed a trail for generations to come. Now, this celebration of the power of Black womanhood returns to Broadway for the first time, reinvented, directed, and choreographed by “a true superstar of theater and dance” (NPR), Tony Award nominee Camille A. Brown. And her vision is as fearlessly new as it is fiercely now.