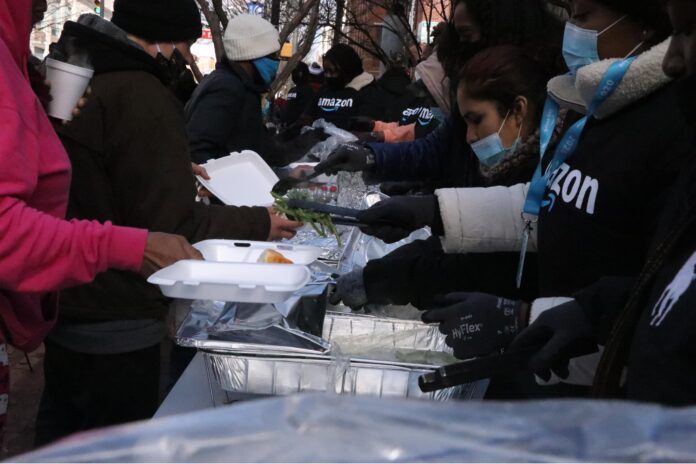 Amazon workers from Robbinsville teamed up with Veterans of Foreign Wars (VFW), 1911 Smokehouse BBQ, and Trenton Unite Families Foundation (TUFF) to serve hot meals to over 200 Trentonians over the weekend.

Reggie Hallet, Executive chef and Part-owner of 1911 Smokehouse, explained that the VFW are regulars at his restaurant. “This is what 1911 Smokehouse does. We are for the community, and it’s what we have been doing for six years,” Hallet said.

Throughout the day, Amazon workers handed out t-shirts that read in bold letters AMAZON  for volunteers to wear as they served to the Trenton community. The partnership came naturally between the different organizations, hoping to make a difference in the area.

Volunteers stood on E. State Street and Broad Street from 11 a.m. to 1 p.m. handing out food. Yazminelly Gonzalez, a candidate for Councilwoman At-Large and Vice President of TUFF, helped organize the event, partnering with different organizations across Trenton. “We want to start by just making an impact right here in downtown (Trenton),” Gonzalez said.

Overall, over 65 workers from different organizations helped with the service project. They served 205 meals and gave 175 care packages with toiletries, socks, and gloves for a few hours. This was on top of doing landscaping work across the small park. Kirk Fistick, an associate with Amazon warriors from Robbinsville, helped organize the event explained that they had two different service teams there that day, The Black Employees Network (BEN) and Warriors, the Veterans network at Amazon.

“In addition, Amazon has generously donated essential items for folks, toiletry items, socks, gloves, those sort of things that that that people might need… One of the things we want to do is help the veteran’s mini park right. It’s not in the best condition. So we’re doing our best of what we can do here to beautify the park and make it nicer,” Fistick said.

The team was populated by Trentonians and those from the surrounding areas to help. One Trentonian, Scott Harrison, an amazon associate, has been working with amazon for about two years. He has always wanted to get involved in a service project but didn’t have the chance until now.

“This was my first opportunity to represent where I work in the city where I live,” Harrison said. “It’s cool to see some people taking the time to clean it up. And I’m even seeing some people…coming by the stop to see if they can help… what I notice about Trenton is when they see people doing something, there is a group that will come and try to help.”

Part of that group coming to help was the Trenton local VFW. A group of veterans who want to help their community prosper. Luddie H Austin, has always wanted to help, first in the arm forces, then as a police officer, and now as the Post Commander for Trenton’s Local VFW. “We started the first VFW in the city of Trenton in 2017. And ever since then, we’ve been active in the community, doing Community Give Back, scholarship programs, things of that nature,” Austin said.

They wanted to show up and help people like Imani Norwood, a Trenton resident who was picking food for her and her children. “I was driving by, and I saw that they were giving out, you know, food and helping the community out,” Norwood said. “It feels good to see that someone is out here helping the community.”

Austin explained that helping people is what the VFW was created to do. “The beauty of our organization, we served our country, and now we get to serve our community,” Austin said.