Across from the James Kerney Campus on the side of the Broad Street Discount Furniture store in Downtown Trenton sat a bland wall of concrete. When Trenton artist Leon Rainbow heard that I Am Trenton and Isles were doing a public art grant for the Old Trenton Neighborhood, he saw an opportunity to take to this canvas.

Shortly thereafter Leon Rainbow got to work creating his largest solo project to date which stands 15 feet tall and spans over 85 feet wide.

“This site captured the architecture from Broad Street Discount Furniture to the Mercer County Community College Fashion and Design school.  So I  decided to bring attention to the area, by designing and creating a mural of the buildings and businesses.”

The project was undertaken by Leon, his friend Steve Zahirny, and assistants Radek Selski, Sophie Ban, and Marcus Mera. Supplies were provided by TerraCycle and Liquitex.

The project was recently finished and will be highlighted as part of Art All Day. The vision for the project as Leon puts it is that

“The Mural will beautify the area and hopefully spark revitalization in this section of Broad Street.”

Leon first came to Trenton in the late 1990’s to pursue an associate’s degree from Mercer County Community College. Since then Leon has gone onto become a PhD level instructor in the local arts scene.

Leon chose to call Trenton home for both the arts scene as well as the community and its people. He remarks how the city has embraced and supported him through his artistic journey. He has become one of the leaders in the arts community which has been growing and building over the past 15 years in the Capital City.

During 2018 he has also completed murals in Trenton on the Front Street Garage, Perry Street, at the Trenton Health Team’s new location at One West State Street, and the West Ward Anti-Smoking Mural. 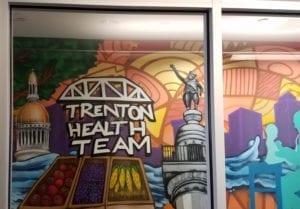 He describes the concept behind the Perry Street billboard as “Growth” which is “Represented by the sunflower. It also depicts planting which is synonymous with planting seeds artistically and the neighborhood growth. I chose the sunflower because it represents light and positivity.”

Outside of Trenton, Leon has garnered acclaim for his works as he has produced pieces for commercial properties such as the TRC headquarters in West Windsor and Jet.com in Burlington. He most recently was featured in a joint exhibit at the Lake Front Gallery at Robert Wood Johnson University Hospital which showcased him and his teacher Mel Leipzig.

Leon has also combined his passion for art and love of Trenton in his “Straight Outta Trenton” line of shirts and hats which can be purchased through Jersey Graf on https://www.jerseygraf.com/. Jersey Graf is a collaborative effort of graffiti artists from urban cities throughout New Jersey, such as Leon Rainbow and others in Trenton. 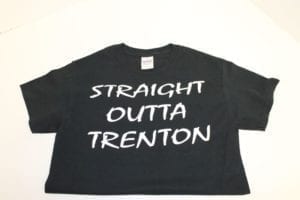 To learn more about Leon Rainbow and check out some of his work, visit him online at https://www.leonrainbow.com/.