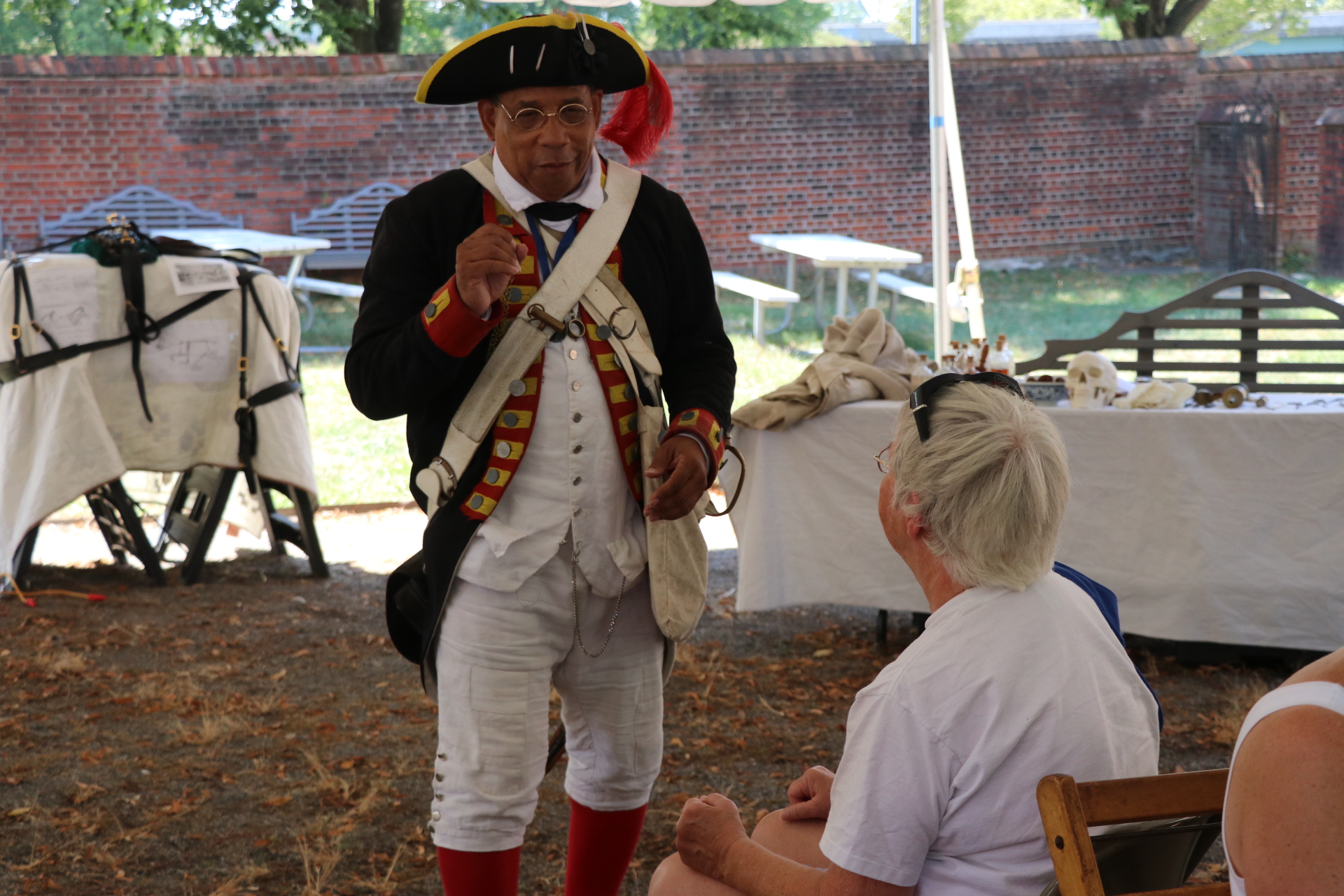 In August 1781, General George Washington and the French army under General Rochambeau made camp in Trenton with thousands of soldiers, women, and children as they hit the halfway point in their almost 700-mile March to Virginia. Afterwards, the combined forces of Americans and their French allies would defeat British General Cornwallis, ending the War for Independence.

“They were marching from Rhode Island down to Yorktown, Virginia. They rendezvous in Princeton a few days ago, so to speak, in 1781, and then came down here to Trenton. They camped here for a few days… the men, the horses, the oxen forded the river, the cannon parked right here next to the Trent House and then ferried across the river. Once they got over the Delaware River, they went down to Philadelphia and headed off South,” said Stephens.

This week was a part of a four-day event where Princeton, Piscataway, Trenton, and Westfield all held events commemorating their role in hosting the revolutionary war. Julie Diddell, the State Chair for Washington Rochambeau Revolutionary Route, New Jersey Association, explained that they are hosting events to help spread the word.

“It’s a lesser-known story. And it’s an inclusive and diverse story that who knows. And that’s where we’re trying to get that word out to. So that’s why it’s important to help Trentonians feel that pride,” Diddell said.

There were scavenger hunts, army drills for tourists to participate in, and all-around fun for the Family. Jessica Rauv, a Trenton Resident, explained that she found it online and brought her son out with her.

“Well, we got to go inside and check out some bones, teeth, and pottery chips. We saw some tea. We got to see a man roast some garlic on a campfire. We got to do some soldier drills…I like them knowing where they came from. It’s important for the kids to know how we came up,” Rauv said.

However, the most exciting part of the day was talking to reenactors who could provide information about what it was like to be a soldier in the Revolutionary War.

“How incredible it is that there are people that will take on the roles of the French soldiers and set up these encampments,” Diddell said. “To have a living history exhibit, where people can touch and feel. And it might not be 100% historically accurate, but it is close enough for the average person to embrace and pique their interest; so this is an incredible thing.”

In the back Noah Lewis, a Historian and Reenactor with the 1st Rhode Island Regiment, was portraying Edward Hector, a teamster who hauled supplies and armaments on top of being a bombardier who assembled ammunition and placed it in cannon for firing.

“He fought in the Battle of Brandywine and the battle of Germantown. He’s one of the many black soldiers that fought during the American Revolution,” Lewis said. “I’m telling him quite a bit about him being a Teamster. But I’m also talking about blacks during Washington, Washington’s army. About three to 5000 People of Color served the American cause, seven to 10,000 served the British.”

Listen to Lewis talk about African Americans Role in the Revolutionary War.

Meanwhile, the Le Regiment Bourbonnais, a French infantry unit, set up a military camp on the grounds showing visitors how ordinary soldiers lived while not on the battlefield. They demonstrated camp cooking with garlic and chicken and taught children how to drill with French commands.

Christopher Schrader, a reenactor with the Le Regiment Bourbonnais, explained that the American Revolution would have been lost if it weren’t for the French. “People don’t understand how much of a debt we owe France as a country,” Schrader said. “When the French got involved in the war, it became a global war. And it raised the stakes for the British, and the reason they quit the war is not that they couldn’t win in North America is because of the cost they paid.”

The day’s main focus was on the Washington-Rochambeau March and showed how the revolutionary war soldiers packed and hiked. Algernon Ward, a local historian, and leader of the Locust Hill project, was dressed in full colonial solider attire. “We have our gear, remember these guys were marching, so they didn’t bring a lot of articles that they had to carry, so they had to move as lightly as possible,” Ward explained. They packed light as they moved down to trap the British army in Virginia.

Through facts like this, residents like Beverly Phillips, Trenton Resident and Volunteer at the Trent House, came out to question and learn about the March that led to the Victory of the American Revolution.

“Well, we just learned about the Washington Roshambo March, which I didn’t know much about and how they came from up north and then went through Trenton and camped here with the French… It’s kind of the city’s birthright… It’s important, just in principle, we have a responsibility to maintain the history,” Phillips said.