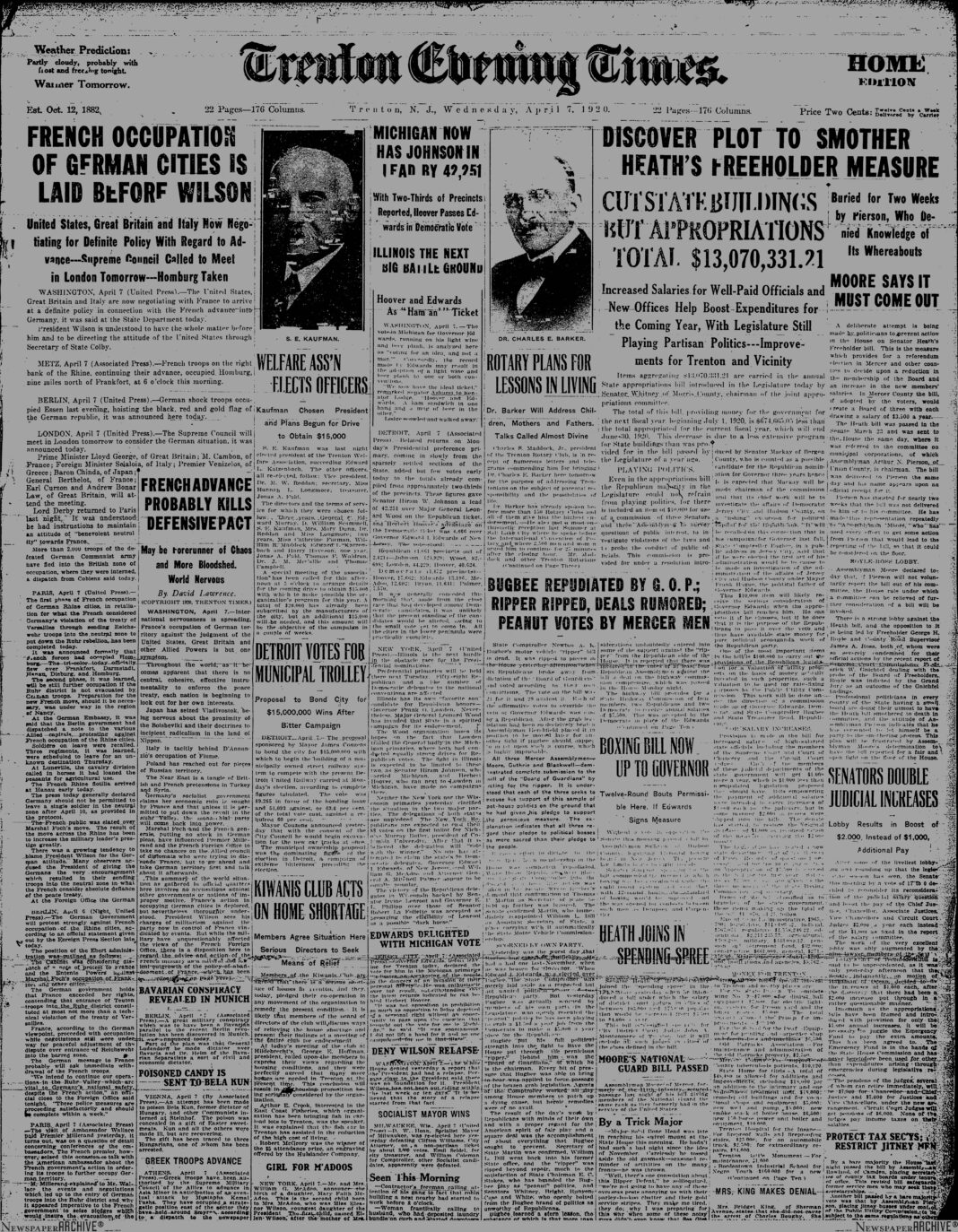 For Historic Trenton’s Day in the Life, we’re looking back through newspapers from the beginning and examining everyday problems, solutions, and needs during historic Trenton’s past. Today, we head back to April 7, 1920. The city was getting ready for the spring season; the top headline was “The French Occupations of German Cities Laid Before Wilson.”

1920 was a year of significant change as the Eighteenth Amendment to the U.S. Constitution went into effect, creating the era of Prohibition disallowing the manufacture, sale, or transportation of alcoholic beverages — a ban that would later be abolished in 1933. Also, the Nineteenth Amendment was passed, giving women the right to vote and radio become a family experience with the first broadcast being heard from Pittsburgh, PA.

In Trenton, members of the Kiwanis Club pledged their cooperation to remedy the housing crisis in the city. George E Hoffman, who was the president of the Kiwanis Club at time, called upon the members to talk about their views regarding housing. Many agreed that more homes needed to be built within the city to cater to its population, however there was no consensus by the end of the meeting. The Kiwanis have catered to the city of Trenton since 1918. According to records, over 1,200 members have been apart of the organization since its beginning.

Trenton Rifle Club, a New Jersey Domestic Non-Profit Corporation filed On March 1, 1920, held its first meeting at The Chamber of Commerce and featured an informative talk by Alf P Lane, a well-known firearms instructor of the time. The Trenton Rifle Club was one of the many organizations that encouraged firearms learning, but they did not require military service. At the time, the 33 members were eligible to come out for the National Rifle Association medal shoot.

Meanwhile, construction was taking place involving the building at the Trenton Junction for trolleys to connect to the subway system in Philadelphia. On the industry side, Trenton’s newest aluminum plant began to operate on Brunswick Ave. The hope was that this new plant would save thousands of dollars at the city’s filtration plant that uses the metal.

Finally, in the “Seen this morning” section, a foreman was calling attention to his workers that a robin was building a nest in a nearby building and had started at 8 a.m. Also, a woman was frantically calling to her husband who had thrown laundry on the front curb.