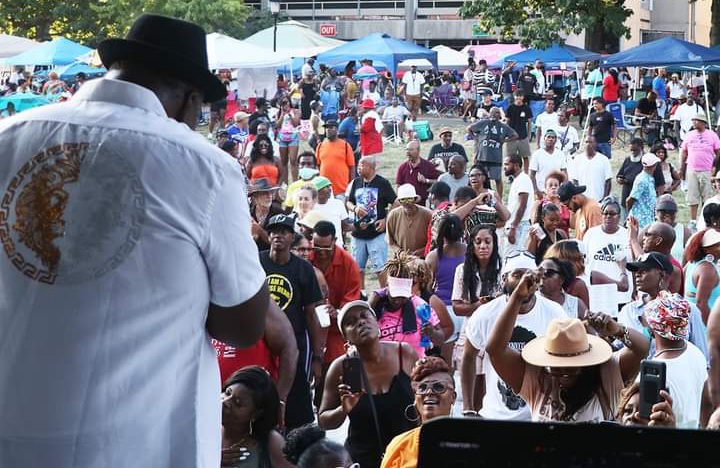 Hundreds of people gathered at Mill Hill Park on Saturday for the Levitt AMP House Festival with tents and food, card games and chairs, but most of all, they brought a dancing spirit.

Kim Gisp, a Georgia resident, was visiting her family in Trenton when she head about the concert. Gisp and her two grandkids decided to walk from Mill Hill over to the park to see people crowding the dance floor.

She explained what she saw. “I see beautiful faces. I see different cultures. I see green in Mill Hill Park, and it’s still the same green as when I left. I see love. That’s what I see. I see love here in Mill Hill Park…and I’m very excited to get on that dance floor and dance to this wonderful house music,” Gisp said.

There were vendors for residents and tourists to browse selling food and wares to anyone that stopped by. Simply Dented, a jewelry store owned by Trenton resident Tina Dent, was handing out handmade jewelry to customers. Dent explained that business was booming.

The event’s highlight was the music as Grammy nominated and award-winning artists performed on the Levitt AMP Stage. Mark Gibson, Founder of the Trenton House Music, was the head of this Levitt AMP Concert.

“It’s about the music. It brings a certain dynamic and people outside. Then once they come out and everybody is reuniting, it’s just amazing,” Gibson said.

Kenny Bobien, an international Grammy-nominated recording artist, was one of those performers serenading the crowd. “Right from the beginning. (Trenton has) taken care of me…the hospitality here is always amazing,” Bobien said. He explained the energy he got from the house crowd. “I love it. Great crowd, great house crowd. Do you know what I mean? I didn’t realize certain had so many house-heads… It’s just been great to crowd. It’s amazing.”

As the night went by, Trentonians were amazed by the showing. George Johnson, a born and raised Trentonian, explained that he had been talking to old friends he hadn’t seen in years.

“I am so impressed with this whole event. And I can’t believe that these people are dancing and enjoying themselves and I mean it is so hot….so it’s going great,” Johnson said.

The night of dancing was a spiritual moment, Akela Wright, a Trenton resident, explained. “It’s a spiritual thing. A lot of people think it’s about dance, but it’s about what you are feeling in the moment,” Wright said.

The crowd was out from early afternoon until 8:30 p.m., dancing in the sun and the cool night air. Tommy Davis, the owner of three different record labels and two-time Grammy nominated artist, closed out the night with the crowd.

“The crowd was easy. It was easy…So I’m always closing stuff up, and I can over-exert them.” He explained that house music is as much for the younger generations as it is for the older generations. “You see, most of them average 35/40 above, they still want to dance…so they claim this sound as theirs.”

ADH, a lyricist who combines Afrobeat, African percussions, jazz, and hip-hop to create his signature sound, will perform in Mill Hill Park this week. Hip-hop violinist and neo-soul singer/songwriter Bri Blvck and her band will open up for ADH.

The Levitt AMP Trenton Music Series is supported in part by the Mortimer & Mimi Levitt Foundation, which partners with towns and cities across America to activate underused public spaces through the power of free live music, creating a welcoming, inclusive destinations. Local presenting sponsors include NJM Insurance Company, along with the support of the City of Trenton, the Mercer County Park Commission, Greater Trenton and TrentonDaily.