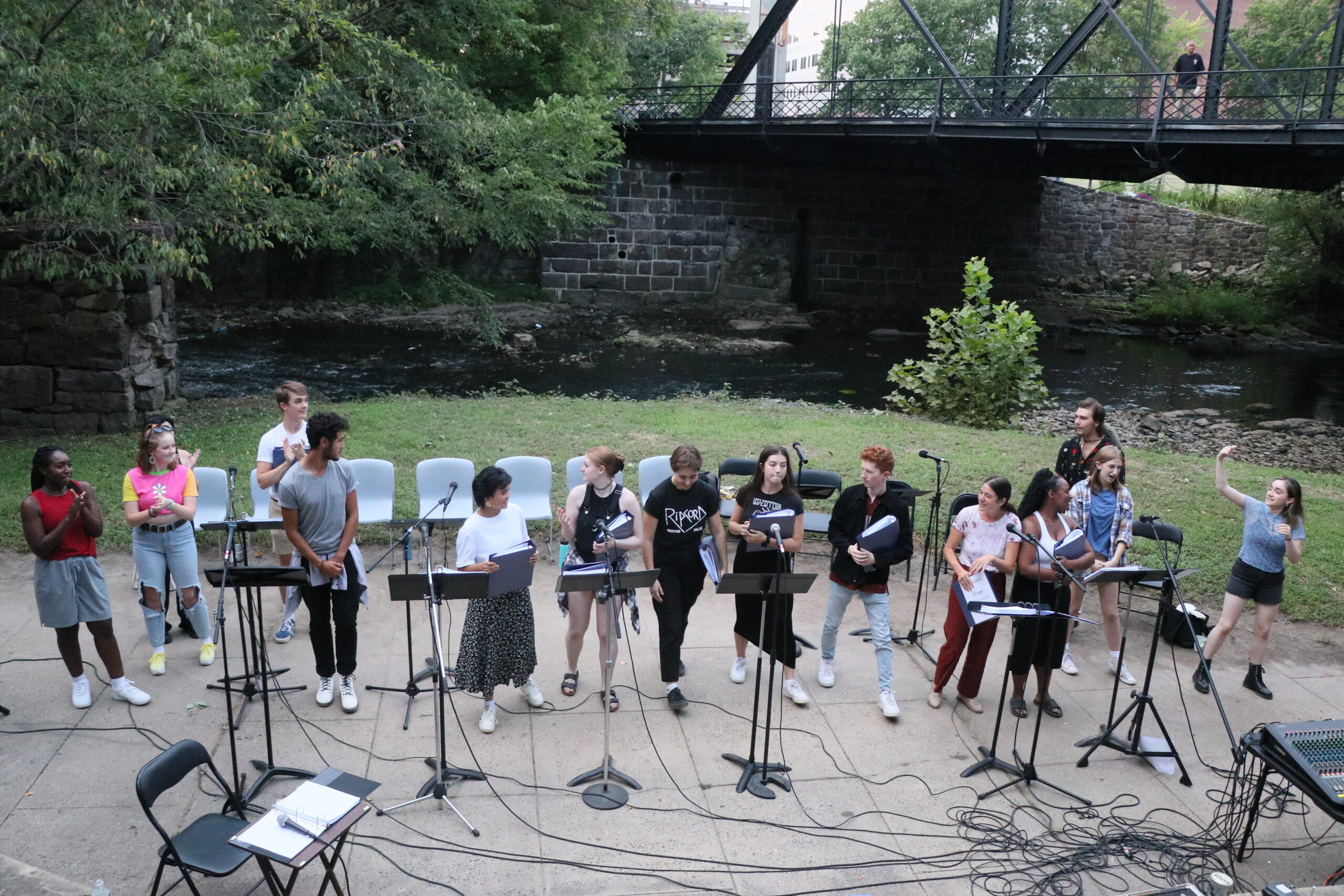 Some things make you forget where you are; a good book, an interesting podcast, or company with the right person. In Trenton, Passage theatre gave goers a different kind of escape at the Mill Hill Amphitheater.

With its overlook to the Assunpink creek, the bridge dividing the path, and a cool breeze running through the crowd, a troupe of performers who went through 27 hours of boot camp gave an acoustic read-through of the first showing of Passage’s next success story: Clean Slate.

Written by David Lee White and Composed by Kate Brennan, the show began its long process in 2017. White and Brennan have worked on other projects like ALiEN8 Project. The show stayed the same throughout the writing process until two weeks ago.

“We rewrote the show from the ground up a few weeks ago… Right before we started this project, we auditioned at passage theater for a role and, through the audition process, realized that we just needed to cut the role. So we cut an entire character,” White said

Brennan added that even though they cut a character, auditions were so talented that they had to rewrite the play to make it work. “All the people that came in were so talented, they inspired me to write that into another song that I then incorporated in this, but the roles go on and the storylines gone and but it’s focused the story and created a lot more magic.”

The 29-hour boot camp was a tiring work of passion for all involved in the play. Out of the 29 hours, they had 27 to learn the script and the story, and the last two hours were to perform. Ryanne Domingues, Artistic Director Of Passage, explained that Friday’s performance was an abridged version of the show, with music and lines cut to make it easier on the musicians, actors, and directors.

“We had 27 hours to work on the whole show. During that 27 hours, the script was completely rewritten…songs got moved. And through that whole time, the actors were still learning the music, timing, and everything through that whole time. So what we were able to accomplish was actually pretty incredible,” Domingues said.

The cast and creative worked together the week editing tweaks, learning and relearning different lines and music as it came in. Sophie Freedman, assistant director and an intern at Passage, explained the process.

“The cast and the creative team can get together, collaborate with the people who wrote it, and give their feedback and ideas. And it’s a very collaborative process,” Freedman said. “Over the past few days, we’ve had several scripts come and go, and it’s been interesting to watch. The show evolves over the past couple of days, and it’s going to keep evolving until we put it on.”

For actors, it was equal parts challenging and fun. Kaedon Knight is a leading actor playing a brutal, somewhat insane camp consoler named Hercules, Herc for short, who only wants to look after the kids sent his way.

“Since I’m still young, it doesn’t feel like work quite yet,” Knight said. “So it’s still really fun to me to have to, you know, put up with the challenge of doing all this stuff. So, so far, it hasn’t worn me down.”

The show on Friday was a read-through, with actors reading from the script and singing with sheet music in front of them. This shouldn’t diminish the fact that they still put on a funny and tear-jerking show at the same time.

“It’s a cool show,” Freeman said, “It’s about a rehabilitation camp for teens who are going through it…It focuses mainly on Andy, who is having trouble with stealing and lying, and her foster moms sent her to Clean Slate.

Freeman continues, “And once she gets there, she and the other campers start noticing that the forest is acting up. They realize that the ghost of the past camp was there before Clean Slate, and they are haunting the grounds of this new camp.”

With an entire cast of moms, misfit campers, a deranged yet friendly camp counselor, and a group of spirits known as the fates causing havoc, Clean Slate is only just begining to impress.

The acoustic versions of the songs lent themselves to the outdoors. The feel of the play creates an atmosphere of sitting around a campfire and listening to a story told by your peers. Thats if your peers could harmonize.

“That was a great show,” said Dan Fatton, Trenton Resident, who came down to see the show. “Nice beautiful setting for a summer evening in Trenton and love being in the amphitheater love that Passage is doing live theater outdoors. I liked some of the ensemble songs where they were singing together and harmonizing.”

Now, it is time to see what worked and what didn’t work. Domingues said it is back to the whiteboard to tweak the play so it can go from good to great.

“Now we get to go back in and what did we learn from the reading… We still have some work to do. It’s a big play. There’s a river in it. I have no idea how we will put that on the stage…

Clean slate will perform first at Rider University in February before coming to Passage Theater in March.