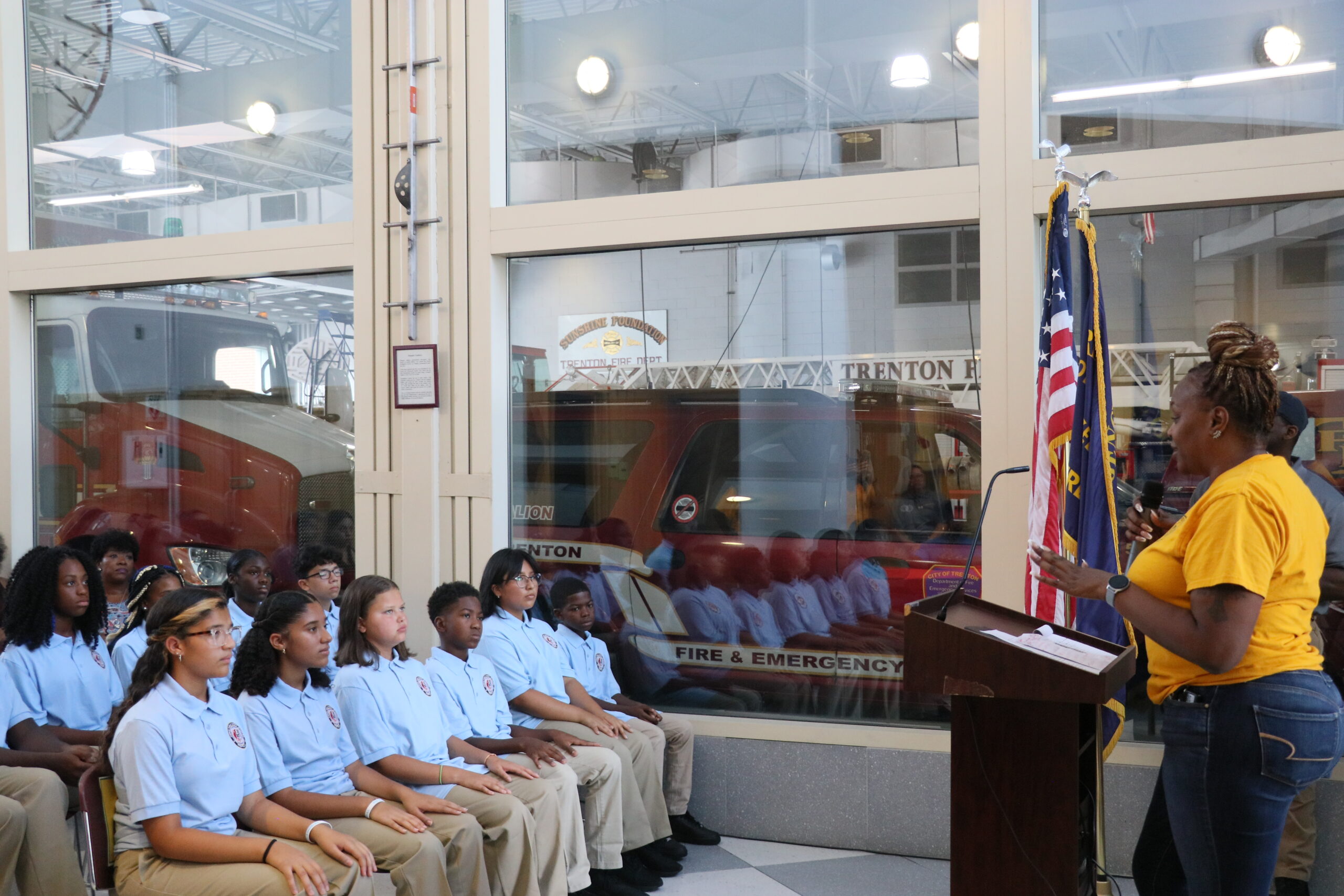 Cadets walked down in file and rank, standing at attention as the parents, Trenton Police, and Trenton Fire Department workers watched with proud faces. These middle school cadets were the first in what is hoped to be a long tradition in the city of Trenton.

“It just seemed like such a great idea to make that connection, you know, you talk about community policing, this is community firefighting. Trying to expose the youth for their first real foray into firefighting,” Mayor Gusciora said.

With the green light to start a camp, Director Douglas set to work with his team. At the head was Captain Brian Roberts, Lead for the JPSA. Roberts built a syllabus from the ground up and recruited his fellow firefighters, EMS, and police officers to train the kids in a six-week-long course.

“The kids got to learn a lot…we didn’t make it easy for them. We gave them the same instruction, the same courses that the adults got,” Roberts said.

The cadets were put through exercises like mile runs and push-ups, on top of mental exams. Jocelyn Joseph, Fire Cadet, explained that they did everything from scuba diving to CPR.

“We learned how to rescue people in serious situations and how to act with no hesitation. That was one of the first things that we learned and continue to practice throughout this program,” Joseph said.

Her mother and Trenton resident Shakatta Vincent explained that as a nurse, she was most impressed with how her daughter learned to triage. “What got me was she can triage, and in case of a mass casualty, she knows how to triage,” Vincent said. In the case of a mass casualty event, triaging is the assignment of urgency given to each patient, depending on their wounds. “It took me quite some time in nursing school to learn that one,” Vincent said.

Trenton first responders came during their breaks and days off to help. Natasha Rivera is a firefighter in the Trenton Fire Department and was an instructor. She was given the nickname “mom of the group.”

“I got the name because I brought my son to the program a few times. And I guess I treated them as I treated my own,” Rivera said. “I cried along with them. I took care of them. I was giving them lotion… tying their shoes or something like that. I was motherly; I was the caring part.”

It was a diverse group of cadets; all of them were middle schoolers, and half of the students were female.

“They don’t see many female faces in this type of job, career, or program even,” Rivera said. ” When they saw me there. Their eyes lit up like, oh, she’s a female firefighter. So it was more of like an influence type of role model. I took that pride in that a lot because a lot of the girls looked up to me.”

It wasn’t all work. Cadets went on field trips to six flags and the 9/11 Memorial in New York City. Magnus Henry Maverik, a cadet, said he was grateful to have had this experience. “I felt very grateful to do anything like that; most people would have to pay a lot of money, and that was very expensive,” Maverik said.

One of the hopes of this new camp is to open a door for Trenton students looking at alternatives to college. “Especially with adolescents going into high school,” Roberts said. “They’re not sure which way direction you want to go. This is one way we can show you…. If you like this right now, you might like it in five years when you want to take the exam.”

For Maverik, it was an easy step one.

“I want to be a firefighter when I grow up. That’s because my cousin is a firefighter… It helped me, mostly with the physical training,” Maverik said.

No matter what the cadets choose in the future, all the speakers at Friday’s graduation explained that they would have their backs. Trenton Police Detective Tamika Veal told the cadets that she wished them the best of luck.

“Anything that you want in life, you can do it…continue to strive to be the best that you can be…You need to look to everyone here and know that if you ever need us, we are here to help you get you in the right direction. We want you all to become successful young people,” Detective Veal said.