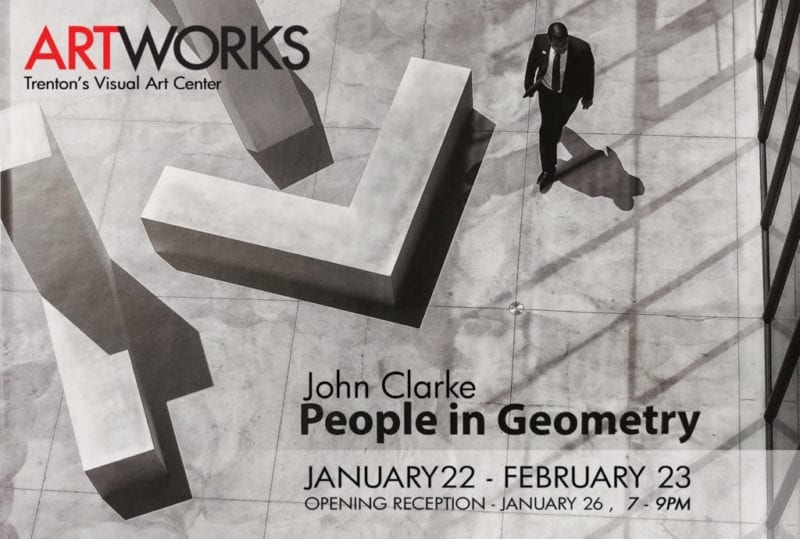 The architectural, planning, and landscape firm Clarke Caton Hintz,renowned for its work throughout the region, is a mainstay in Trenton. Located at the Masonic Temple, the firm’s principal emeritus, John Clarke, is also a recognized photographer whose work will be featured at Artworks in the exhibit “People in Geometry” opening on January 22nd.

“The images for ‘People in Geometry’ were made over the past four years and some of the photos in this show were originally exhibited at Gallery 14 in Hopewell, NJ,” said Clarke. “They capture the relationship between people and their unique geometric surrounds both in the United States and abroad.”

“Light is an important factor in all photographs, but in this set of images the quality and character of light is particularly important, added Clarke. “Sparkling surfaces that glow and reflect draw the viewer’s interest into the photo. In order to emphasize the relationship between the geometry of the setting and the people, all the photos are monochrome. The black and white format unites the various elements of the photo and makes the image more abstract than it would be in color.”

“We often think about capturing a decisive moment in a photo as being an important objective of the medium, said Clarke. “The decisive moment can be the capture of a human action or expression but it can also be a moment when the light defines a setting and its inhabitants in a special way. The best of these photos have a mystery about them and they convey an emotion which is difficult to define.”

“I spent my professional life immersed in architectural and urban design issues. A long the way, I taught in the architectural schools at the University of Virginia, Cooper Union and Columbia University,” Clarke noted.”

“My association with the structure that houses Artworks today goes back some 44 years to the mid 1970’s when I was working as the Director of the Department of Planning and Development for the City of Trenton in Mayor Holland’s administration, said Clarke. “At that time the idea of creating studio work spaces for artists emerged as a development goal for the City. Working with the other architects in my department, I lead the planning, design and implementation of the renovation of the vacant Sears warehouse which became Artworks. It is gratifying to witness the success the operation has had all these years and it gives me great pleasure to have an opportunity to exhibit at Artworks.”