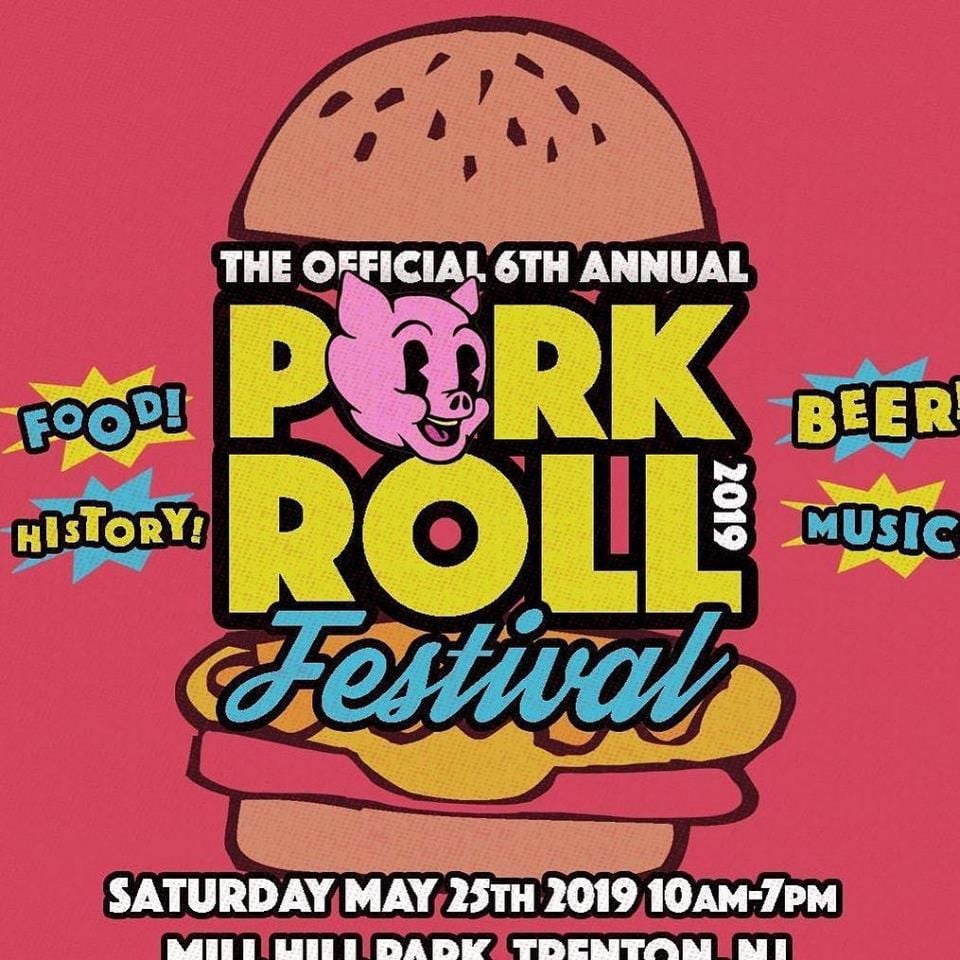 On Saturday May 25th, Mill Hill Park will be transformed into Pork Roll Park as the Official 6th Annual Pork Roll Festival comes to Trenton. This is one of Trenton’s premiere annual events celebrating Trenton’s unique community and unique delicacy known as Pork Roll (not “Taylor Ham!”).

We encourage you to hit the gyms now as you enter Mill Hill Park, (the site of the Battle of Trenton) on Saturday you will enter into a Pork Roll lover’s dreams come to life. This year’s event will feature 8 food trucks and 6 dessert carts including Trenton staple 1911 Smokehouse BBQ, Johnny’s Pork Roll & Coffee, Jersey Johnny’s Grill Classic Weiners, Cass’s Catering, Top Cart and more serving up just about any pork roll creation you can dream of including nitrogen pork roll ice cream. The event will also feature a large beer garden sponsored by Trenton’s Mill Hill Saloon.

The event will additionally feature the annual Pork Roll Queen contest happening on stage at 3pm. While winning Miss Universe might be nice it doesn’t come close to having the prestige of being crowned the Pork Roll Queen. A group of female pork roll lovers will battle it out doing the quirkiest things possible to win and take home the crown of Pork Roll Queen (rest assured Steve Harvey will not be hosting this contest).

While you are taking in all this action you will hear a full day of excellent music including Trenton’s DJ Ms. Sue Ms. Sue, blues jazz musician Paul Plumeri, Princeton School of Rock, and many more artists. Many of the artists have been recruited via the recording studio capacity provided by Exit 7A Creative Studios. For a full line up of music click here.

In addition to celebrating one of Trenton’s greatest gifts to the world of Pork Roll, this festival celebrates Trenton’s community by welcoming many community groups such as the Trenton A-Team selling hundreds of dollars worth of artwork every year, I Am Trenton selling their Trenton memorabilia, performances by Sprout University School for the Arts, appearances by the Army National Guard, and also supporting Trenton VFW Post 12165 led by Former Trenton police officer Luddie Austin.

The festival is full day of fun for the whole family as along with pork roll menus and memorabilia there will be face painters, portrait artists, sand art, and more activities for kids.

The Official Annual Pork Roll Festival was conceived by Scott Miller, owner of Trenton’s Exit 7A Creative Studios, while working on a cooking show pilot. He and group of friends were talking about creating an event that would bring the community together while highlighting Trenton’s downtown. It was first made as a joke to hold a pork roll festival but with Trenton’s extensive history manufacturing pork roll via the presence of of both Case’s Pork Roll and Tayor Pork Roll the joke has turned into an annual signature event attracting thousands to the Capital City.

To purchase ticket for the Official 6th Annual Pork Roll Festival or to learn more visit http://porkrollfestival.com/. Also check them out on Facebook at
https://www.facebook.com/porkrollfestival/.

The festival is additionally looking for volunteers who make this annual festival a reality. To sign up visit them online.

About Exit 7A Creative Studios

Exit 7A Creative Studios is located at 9 West Front Street and owned by Trentonian Scott Miller. The business provides a wide variety of creative services including films, publications, distributions, podcasts, educational program, commercials, along with possessing a full size recording studio for music artists used nightly for band rehearsals. For 16 years the establishment as served as one of the go to facilities for those in need of creative services. For more information click here.

The Official 6th Annual Pork Roll Festival will take place from 10am to 7pm in Mill Hill Park located at 100 South Broad Street.