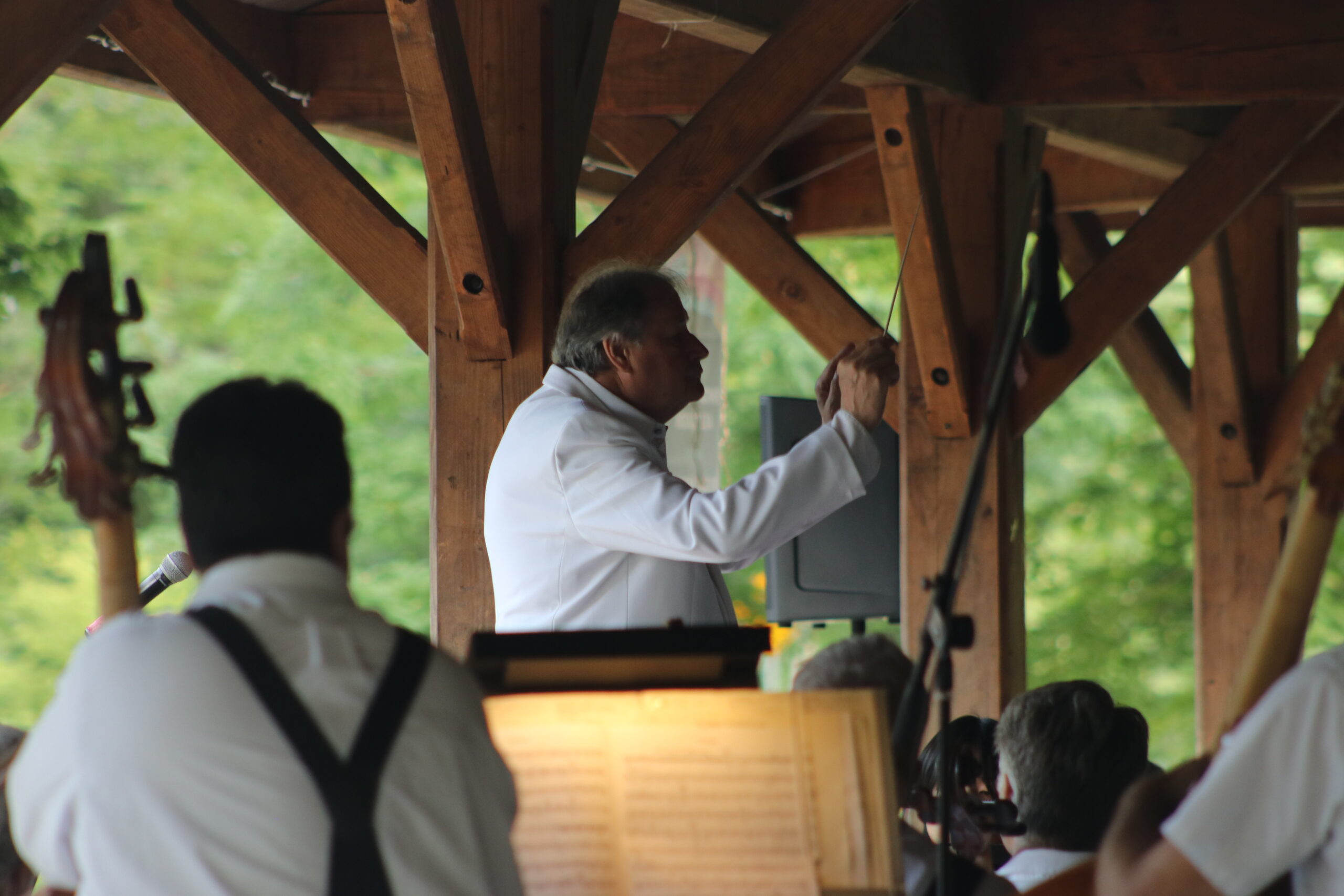 Cadwalader Park was filled with patriotic and hummable music over the weekend as Capital Philharmonic of New Jersey (CCNJ) and  music director, Maestro Daniel Spalding, kicked off the Levitt AMP Trenton Music series.

People came across the city, set up lawn chairs and blankets, and listened to an hour’s worth of symphonic music. Gloria Teti, president of the board of trustees of the CCNJ, explained that they were excited to kick off this year’s concert series.

“That hasn’t been done for two years because of the pandemic. And we’re the kickoff concert tonight. This is the only concert that will be done here at Cadwalader Park under the pavilion,” Teti said.

Most knew what they were getting into, but Jerome David Mason, born in Trenton and living in Ewing, was walking his dog when he stumbled on the free event.

“l often come to Cadwalader Park, and so I’m gonna be honest, I really didn’t know about this event, so I had no foreknowledge of it,” Mason said. Still, he set up his hammock in the back between two trees, tied his dog to the tree, and stayed for the concert.

“I came out and saw what was going on, and so I sat down and enjoyed it,” Manson said. “The music was great. I really enjoyed the history aspect that (Maestro Spalding) incorporated into it. That was really cool.”

Liberty Weekend with the Kiwanis Shows Off Trenton’s Historic Prowess

Conductors often give history and fun facts between pieces. The music selected ranged from The Cowboys Overture by John Philip Sousa to the Theme from Mission: Impossible by Lalo Schifrin, arranged by Calvin Custer. The theme was Americana, with marches, tributes to the western, and fanfares that top off Liberty Weekend. The CPNJ even included a lesser-known piece by James Hewitt and arranged by Gunther Schuller, the Battle of Trenton.

Teti explained that on top of getting Trenton residents to Cadwalader Park, they hope to bring them out to more CCNJ performances.

“There’s no charge for this, and we’re hoping to wet their whistles…To get people excited about CPNJ, get excited about our season… Hearing this orchestra, watching Dan conduct, it will titillate their spirits to want to come when we kick off our season in October and come to the War Memorial,” Teti said.

It certainly worked for some, Eloise Anderson is a Trenton resident, but more importantly, she is a grandmother to her granddaughter, four year Skylar Anderson. The pair sat in the back; Skylar was dancing and conducting every tune that came out of the CCNJ.

“We came to enjoy the concert, and my granddaughter wanted to come with me because she likes singing,” said Mrs. Anderson. “You’re used to hearing the same thing all the time. This is something different, and you know, it’s not only for older people, but it’s for the young people too because she’s only four and she enjoyed it…I feel good!”

Her grandmother chuckled, “I just really enjoyed it.”

The Levitt AMP Trenton Music Series is a free 10-concert series presented by the Trenton Downtown Association and the African American Cultural Collaborative of Mercer County. It features a lineup of local, regional, and national artists representing various musical styles.

Anne LaBate, a member of the board of the Trenton Downtown Association and owner of Segal Labate Commercial Real Estate, explained that their goal is to introduce Trenton residents to a wide variety of music.

“We’ve been able to have a range of music. And in some cases, we’re introducing people to classical music. And so we love seeing lots of kids here tonight,” LaBate said.

“Our instruments are much more sensitive than some other performing artists, and we bring out the strings and the harp, and they just can’t be out in the open sky,” Teti said.

The other concert will be held in Unity Square Park on Saturday, July 16, at 5 p.m. “We saw it as an opportunity for one of our parks to go into a heavily Latino community,” LaBate said, “But then also say, we want to use that as a way to invite you to be downtown.”

This will be used to spread the word about the final concert of the Levitt AMP Music Series. Grammy Nominee Ariacne Trujillo Duran, lead vocalist and pianist with The Pedrito Martínez Group for more than five years, has performed in some of the most influential jazz festivals around the world. She will perform in Trenton on September 17 in Mill Hill Park.

“We’re going to have her downtown, and we hope to pack the place. We hope to extend the word at the first Latino concert,” LaBate said.